Kent State’s award-winning radio station has grown since officially taking to the airwaves on Oct. 2, 1950.

It started with one antenna—its signal barely reached the edge of the Kent Campus. Seventy years later, it is an award-winning, NPR affiliated radio station, with the largest public radio service in Ohio. WKSU has continued growing in support, radio innovation, technology and staff since officially taking to the airwaves on Oct. 2, 1950.

In 1947, Walton D. Clarke came to Kent from Springfield, Missouri, where he had worked for three years at KWTO. He was hired to teach “new era” radio courses at Kent State and direct the Radio Workshop, a voluntary organization of students interested in radio broadcasting. The Radio Workshop served as the precursor to the university’s own radio station.

WKSU-AM went on the air with its student staff in 1949. The station soon applied to become an FM station to increase its broadcast range. And, after the Federal Communications Commission approved the permit, WKSU-FM 88.1 was created as a non-commercial educational station. After months of test pattern trials, WKSU officially took to the airwaves with a student staff and an eclectic mix of programming on Oct. 2, 1950.

In September 1962, WKSU’s frequency changed to 89.7 FM to increase its broadcast range once again. That position on the dial still remains as the frequency for listeners throughout Northeast Ohio.

As the on-air staff consisted solely of university students, the station only aired limited hours of radio plays, music, news, and student and faculty interviews. That’s a sharp contrast to today, when WKSU operates 24/7 with a full-time, professional on-air staff. 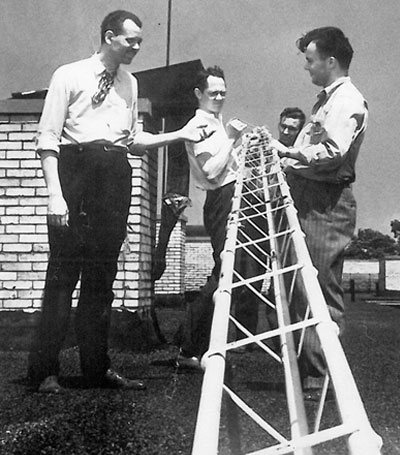 The transition to a professional public radio news station was gradual. For most of the station’s history, even with its student-produced lineup, the station featured classical music. The switch slowly came to life starting in 1974, when WKSU became an NPR affiliate. This change resulted in the addition of many NPR news programs throughout the years, such as Morning Edition, Fresh Air and All Things Considered.

WKSU officially changed its format to news and information in August 2013 to better serve the region and provide quality journalism.

“As a public radio station, WKSU is not driven solely by the quest for high ratings,” says Andrew Meyer, WKSU news director. Instead, the news team looks to create and share valuable content with the community. “Our goal is to make sure we’re pursuing the stories that are important to our audience, and we want to be engaged and connected with the communities we serve to make sure we are aware of what they need.”

Programs like OH Really? help connect the WKSU news team to the community. Through OH Really?, the community becomes part of the journalistic process, submitting and voting on questions online for the reporters to investigate.

The technology that today’s staff uses is a far cry from that available to the first student staff.

The technology that today’s staff uses is a far cry from that available to the first student staff. The station began its digital chapter in 1994 when WKSU.org was brought to life. Chuck Poulton, the current senior network administrator at WKSU, built the website 26 years ago.

“At that time, we were one of the first dozen or so NPR stations to have a website,” Poulton says. “In early 1995, we were the first non-commercial station to use RealAudio technology to stream audio on a website, and we were the second radio station in the world to do so.”

WKSU showed its innovative capabilities when it started its first online radio stations in 2005, allowing listeners to tune in on the web and access HD channels. Today, most listeners use their mobile devices with the WKSU app or website to hear their favorite on-air hosts, rather than moving the dial on their car radios.

Poulton says, “Now we have so many ways to stay in touch: in multiple streams and formats, on a variety of platforms and devices, on demand and in real time, with sound, images and video, and with direct input and interaction from the audience.”

Tech advances constantly contribute to innovations that better fit the audience’s wants and needs. In March 2018, WKSU released its Pledge-Free Stream. When WKSU hosts on-air fundraising, a separate audio stream is available without fundraising messages, which is a huge benefit for its sustaining members—donors who contribute monthly to WKSU.

The staff of WKSU used their tech savvy to safely celebrate the station’s 70th anniversary. With coronavirus safety protocols still in place, WKSU hosted a live virtual presentation from NPR’s Morning Edition host, Steve Inskeep, broadcasting it to an audience watching from home.

The celebration looked far different from the events held in 2000 to commemorate the station’s 50th anniversary. Those events included guests such as Terry Gross from Fresh Air and Robert Siegel from All Things Considered, and a live presentation of A Prairie Home Companion at Blossom Music Center.

However, this year’s celebration wasn’t any less meaningful. “Although we wanted to have a number of events throughout 2020 to celebrate our 70th year, we’ve obviously had to adjust our plans,” says Lindsay Kuntzman Hilewick, BA ’06, MA ’09, fundraising and communications director. “We have a history of persevering and being innovative here at WKSU and the virtual 70th anniversary event embodied those characteristics perfectly.”

The virtual event was sponsored by the Friends of WKSU, a nonprofit organization that raises funds to further the impact of the work produced by the news team.

Such innovation and expertise have not gone unrecognized. In 2020, WKSU again received a Best in Ohio award for the category of Best Radio Newscast (having received this award six times in the last seven years) and firsts in the categories of Radio News Website and Use of Social Media from the Ohio Excellence in Journalism Awards—a statewide competition for the best in print, broadcast and digital journalism. WKSU also placed first in the Best News Operation category from the Society of Professional Journalists Ohio Chapter, whose awards celebrate Ohio’s best journalism.

As WKSU strives to better serve its listening audience and strengthen its relationships with other organizations, it has one partnership it especially seeks to reinforce. The students at Walt Clarke’s Radio Workshop helped shape and mold the station 70 years ago. Their success created a ripple effect that has expanded across time and continues to inspire Kent State students today.

Fueling journalistic passion in students and graduates will remain a priority in the future, Turner says.  “We look to strengthen our partnership with Kent State’s College of Communication and Information to identify, support and train the next generation of public service journalists.”

In that case, the future looks bright for another 70 years of loyal listeners, outstanding reporting, superior technological advances and a passionate staff to continue the WKSU legacy. 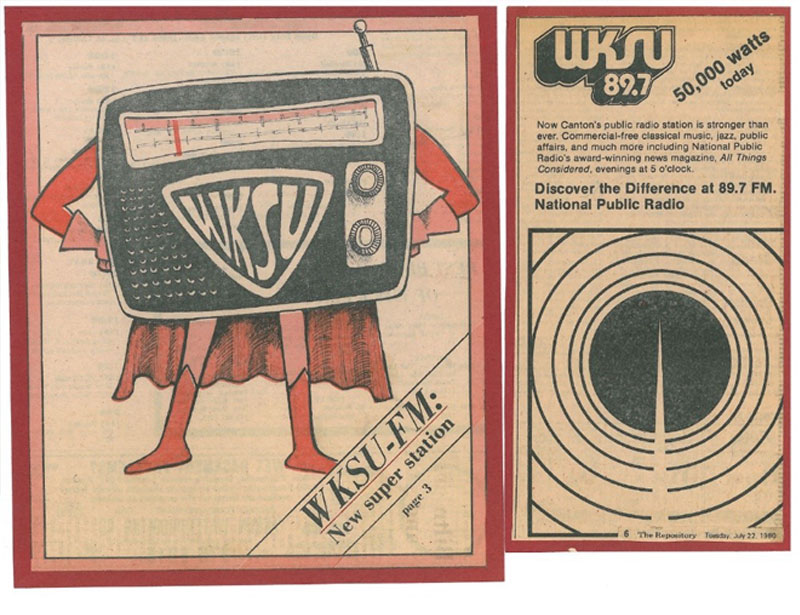 In 1980, after 30 years on the air, it was big news when WKSU increased its power to 50,000 watts. This ad promoting WKSU ran in The Repository, the local newspaper of Canton, Ohio.

From a Single Antenna to the Largest FM Station in Ohio

Starting with a single antenna tacked to a 50-foot pole supported by a chimney atop Kent Hall in 1950, WKSU has added multiple towers and transmitters to further its broadcast range. Today, WKSU is heard in more than 20 Ohio counties and parts of Western Pennsylvania. 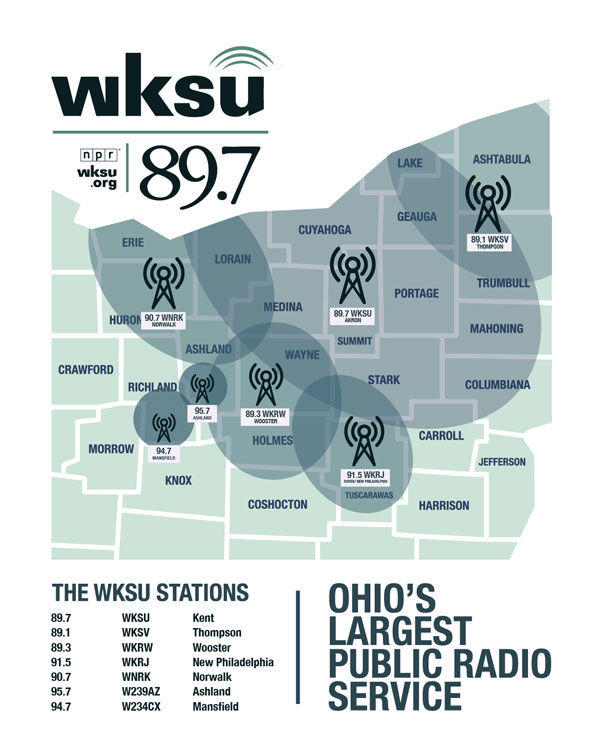 From Years Apart to All Under One Roof 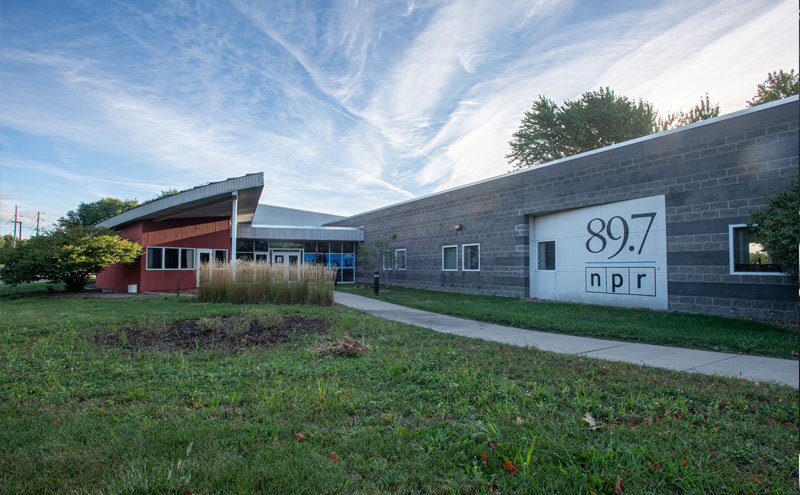 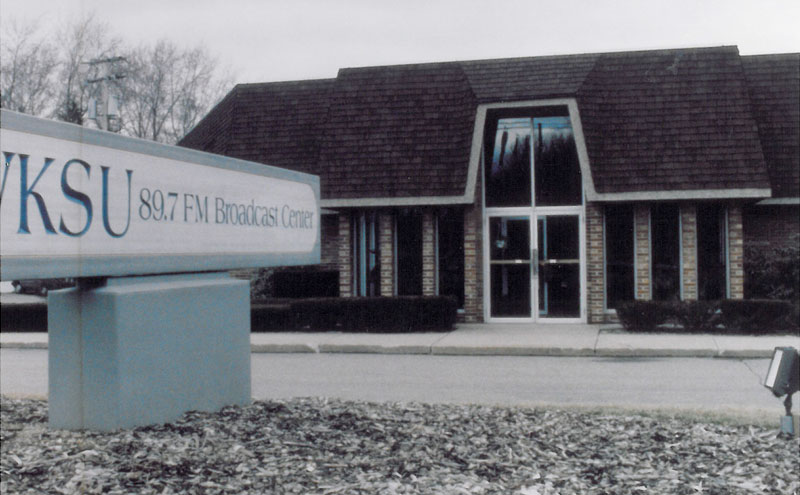 Top photo: Pictured here in 2020, WKSU’s main broadcasting facility was built on the Kent Campus in 1992. Bottom photo: During the 1980s, WKSU’s administrative staff was housed in a former restaurant on East Main Street.

Prior to moving to WKSU’s main broadcast facility at the corner of Summit Street and Loop Drive on the Kent Campus, the station’s offices and studios were located in various locations in and around the Kent Campus for 42 years.

The broadcast staff spent time in the Music and Speech building on the Kent Campus (now the Kent Center for the Performing Arts). Poor acoustics were a problem for the broadcast studios on the third floor, and a lack of space resulted in makeshift offices in hallways and equipment stored in stairwells.

WKSU began raising money to renovate the El Charro building in 1987. While the original plan was to bring the station’s staff together at the former restaurant, an assessment determined that constructing a new building would better accommodate the station’s immediate needs and long-term goals. The private funds collected for the renovation were used to build the $2.1 million facility on the Kent Campus.

Construction started in fall 1991 and proceeded in phases, with the administrative staff moving to the facility in July 1992. Broadcast personnel moved to the building later that year, and WKSU officially started broadcasting from the building in early December 1992.

For more about WKSU's 70th anniversary, view the videos below.

Anna Garvin, BBA ’22, is a marketing student and WKSU intern.

Lauren Green, BA ’21, is a VCD student and WKSU intern.