Memorials and Observances of May 4, 1970

Each year since 1971, students, faculty and others gather at 11 p.m. on May 3 to take part in a candlelight procession around the perimeter of campus. Following the walk a vigil begins with people positioned in the spots where the four students were killed. The vigil continues until 12:24 p.m. on May 4, the time that the shootings occurred on May 4, 1970. The candlelight walk and vigil were established by Emeritus Professor Jerry M. Lewis with the help of students. Today, the May 4 Task Force student organization conducts the walk and vigil. Annual Commemoration at 12:24 p.m. on May 4 The May 4 Task Force student organization has coordinated commemorative programming at 12:24 p.m. on May 4 each year since 1975.

The May 4 Resource Center, which contains materials about May 4, 1970, campus unrest during the Vietnam era and the U.S. involvement in Southeast Asia, was established in the University Library. Kent State alumnus Victor Buehrle Jr. provided funding for the resource center, which is open to the public and also serves as a reading room. Portraits of the four slain students are displayed in the room.

Because three of the four students killed were Jewish, the B’nai B’rith Hillel Jewish Services Center at Kent donated a plaque bearing the names of all four students. The plaque was placed in the Prentice Hall parking lot in 1971 and was stolen two years later. The marker was replaced in 1975 through the efforts of the late Dr. John Ohles and other members of the faculty.

A former faculty-artist, Alastair Granville-Jackson designed a sculpture titled, "The Kent Four." Completed in 1971, the sculpture is located near the School of Art building.

May 4 is established as an official Day of Remembrance and classes recess from noon to 2 p.m.

Ted Abel, an alumnus of Kent State’s School of Art, gave four stained-glass windows, depicting a sunburst in various stages, to Kent State University to commemorate the events of May 4, 1970. The windows were placed in the May 4 Resource Center in the University Library.

A university committee recommended that a permanent memorial be built and that, "the site should present the visitor with the opportunity to inquire into the many reasons and purposes of the events that led to the killing and wounding of students on May 4, 1970, and to encourage a learning process to broaden the perspective of these events." A national design competition was initiated in 1985.

Memorial Dedicated at the 20th May 4, 1970, Commemoration

The May 4 Site and Memorial, designed by Chicago architect Bruno Ast, was dedicated on May 4, 1990, as part of the 20th May 4, 1970, Commemoration. Engraved in the plaza’s stone threshold are the words "Inquire. Learn. Reflect." The memorial is surrounded by 58,175 daffodil bulbs, which symbolize the number of our country’s losses in Vietnam. Kent State artist Brinsley Tyrrell contributed to the concept of the symbolic planting of the daffodils.

Scholarships were established to honor the four slain students, Allison Krause, Jeffrey Miller, Sandra Scheuer and William Schroeder. In 1998, the scholarship awards were increased to include full in-state tuition, room and board. These scholarships are among the most prestigious awarded through Kent State’s Honors College.

Find a May 4 Memorial Fact Sheet

The May 4 Task Force hosts the 25th annual commemoration, "In the Footsteps of History, We March with Them." The universitywide commemoration committee hosts a "Legacies of Protest" symposium and a series of other programs.

The university installed at the sites in the Prentice Hall parking lot where the four students were killed on May 4, 1970. A portal website was created.

Kent State hosted the 30th commemoration, "Experiencing Democracy: Inquire, Learn, Reflect." The commemorative program included an international academic symposium, The Boundaries of Freedom of Expression and Order in a Democratic Society. The university announced its plans to host a permanent, annual symposium on democratic values to commemorate the events of May 4, 1970, and to learn from the past some important lessons for the future. The Kent State University Press published the proceeding of the symposium.

The third annual symposium on democracy, "Democracy and Religion: Free Exercise and Diverse Visions," is held.

The fourth annual symposium on democracy, "Democracy and Globalization," is held.

The May 4 Memorial Site was approved and included in the National Register of Historic Places in February 2010. 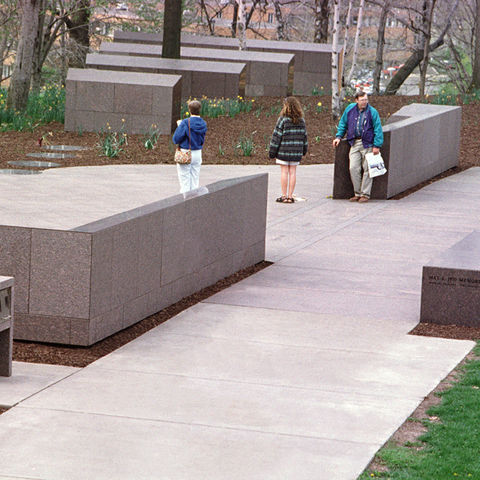