Kent State University’s May 4 Visitors Center was recently recognized with two prestigious awards — one for the visitors center and one for a student-perspective film in the center’s exhibit.

Kent State University’s May 4 Visitors Center was recently recognized with two prestigious awards — one for the visitors center and one for a student-perspective film in the center’s exhibit. 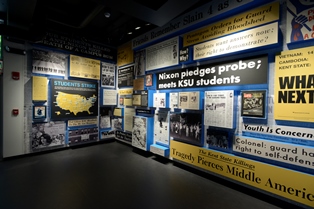 The May 4 Visitors Center received the Outstanding Achievement Award from the Ohio Local History Alliance (OLHA), which recognized 16 historical centers across Ohio for their accomplishments.

Lori Boes, assistant director of the May 4 Visitors Center, said the application for the award included a narrative, pictures and visitors’ responses, and was sent to the Ohio Local History Alliance to be reviewed last August. Boes said the exhibit is told entirely from the student point of view.

“It’s almost as if you’re in that day in time with life-sized pictures of the guardsmen on the walls beside you,” Boes said. “It tells a story in a powerful way that resonates with the people who come through.”

The Ohio Historical Society’s Local History Coordinator Andy Verhoff, who administers OLHA programs, said a panel of judges scored the center on historical research, technique and its impact on the audience.

“The exhibit at Kent State stood out because it’s very well done, not only in the technical concepts, but in that it presents that very controversial subject sensitively and objectively,” he said.

Verhoff described the May 4 Visitors Center as outstanding.

“It’s a small exhibit, but it really packs the punch and does an excellent job in such a small space of conveying the gravity of the shootings,” Verhoff said.

The second award recognizes the film “A Turning Point,” which won the Golden Eagle Award from the Council on International Nontheatrical Events. The film was dedicated to the May 4 memorial on its anniversary last May.

Michael Buday, executive producer of GTOO Media, produced the film, along with retired Kent State professors Carole Barbato and Laura Davis, over the course of a year and a half.

Parallel to the center’s theme, the film was created to show student perspectives.

“The event in history books and the way the news reported it all those years ago was a certain version of events that was really missing the student point of view,” Buday said. “We were inspired to want to make their perspective clear.”

Buday said the video used archival film, interview clips, photos and audio recordings to provide viewers with a clearer context of what took place. He said the film also incorporates 3D-map animations based on actual geographical data. These coordinates designate the site of the May 4 shootings at Kent State on the National Register of Historic Places.

“We put together all new evidence and an under-appreciated student point of view,” Buday said. “This award heard that story and thought our collaboration with the Kent State team deserved recognition.”

Boes said she hopes these awards encourage people from all over the state to come to Kent State’s May 4 Visitors Center.

“We’ve only been open for a little over a year, but have had almost 12,000 visitors,” Boes said. “We want to continue to increase this number and even invite more high school and middle school classes to experience the May 4 Visitors Center as well.”

For more information about the Council on International Nontheatrical Events, visit www.cine.org.