The National Endowment for the Humanities (NEH) has announced a $300,000 grant to Kent State University for its future May 4 Visitors Center. The May 4 Visitors Center was one of 249 humanities projects that will receive support from the independent federal agency. For this awards cycle, the NEH has announced $40 million in awards. The NEH award to Kent State is one of the largest to a university and is one of only eight in the state of Ohio. 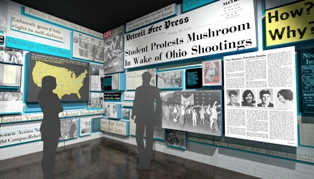 The Kent State project receiving NEH funding is the implementation of a permanent, museum-style exhibit to create a May 4 Visitors Center at Kent State. On May 4, 1970, members of the Ohio National Guard fired at demonstrators, wounding 13 Kent State students, four of them fatally. Many consider May 4 one turning point in the course of the Vietnam War and the Nixon presidency. The 10-year legal battle that followed May 4 raised important Constitutional questions and set precedent in the U.S. Supreme Court. The event also led to reform in military policy.

Exhibit content for the May 4 Visitors Center has been developed through extensive consultation with humanities scholars. Members of the public also have contributed ideas and reviewed materials as they have been developed. Visitors will explore the exhibit to better understand the events of that day in history, the times in which they took place and their meaning for citizens today, including the difference that can be made by young people.

“Receiving news of a $300,000 award from the National Endowment for the Humanities was stunning —and better than winning the lottery,” said Laura Davis, who was a freshman at Kent State when the May 4 events occurred and today serves as an English professor and the university’s faculty coordinator for May 4 initiatives. Davis co-authored Kent State’s proposal to the NEH with Carole Barbato, both serving as co-principal investigators.

“The NEH award tells us that we’ve designed an effective and significant experience for visitors,” Davis said. “We have found our voice in telling the story in a way that honors the loss of Allison Krause, Jeff Miller, Bill Schroeder and Sandy Scheuer, and preserves the timeless meaning of May 4 for generations to come. The history of May 4 will continue to tell young people that they can make a difference.”

Barbato, who also was a Kent State student in 1970 and today serves as a communication studies professor for Kent State University at East Liverpool, said the creation of the May 4 Visitors Center is very important. “Those of us associated with preserving this part of our university’s history always knew it was an important project,” she said. “The significance of the site and the shootings at Kent State to our nation’s history was confirmed last year when the National Park Service accepted our application to place the site on the National Register of Historic Places. This year, a group of scholars and reviewers from the National Endowment for Humanities echoed that importance.

“The May 4 Visitors Center will serve as an educational resource to future generations when those who witnessed the tragedy are no longer around to tell the story,” Barbato continued. “We have a responsibility as a university to preserve the past, and tell accurately, the story of the shootings within the context of the 1960s so future generations can understand better what happened here. From the loss of four young lives, the wounding of nine others, and the pain and anguish our community has felt over the shootings, we hope that people who come to the May 4 Visitors Center will learn from the lessons of the past so they can make a better future for themselves and others.”

The May 4 Visitors Center will be located in Taylor Hall, adjacent to the May 4 Memorial on the Kent Campus. The university is working with museum design firm Gallagher & Associates of Silver Springs, Md., to complete content development and design for the permanent exhibit in the May 4 Visitors Center. Gallagher’s projects include the new Gettysburg visitor center, the new museum at Woodstock and the Maltz Museum of Jewish Heritage in Cleveland. Final elements of the project include developing the four video displays for the exhibit and working with Gallagher on fabrication and installation of the display. The university anticipates that the exhibit will open in 2012.

Created in 1965 as an independent federal agency, the National Endowment for the Humanities supports research and learning in history, literature, philosophy, and other areas of the humanities by funding selected, peer-reviewed proposals from around the nation. Additional information about the National Endowment for the Humanities and its grant programs is available at www.neh.gov.

Image Caption:
The May 4 Visitors Center at Kent State University will tell the May 4 story set against the political and cultural changes of the 1960s. The future exhibit will immerse visitors in the events of that historic day and show the deep and broad impact of the shootings. In one of the galleries called “Impact & Relevance,” visitors will see a map of student protests and headlines from various newspapers and publications.