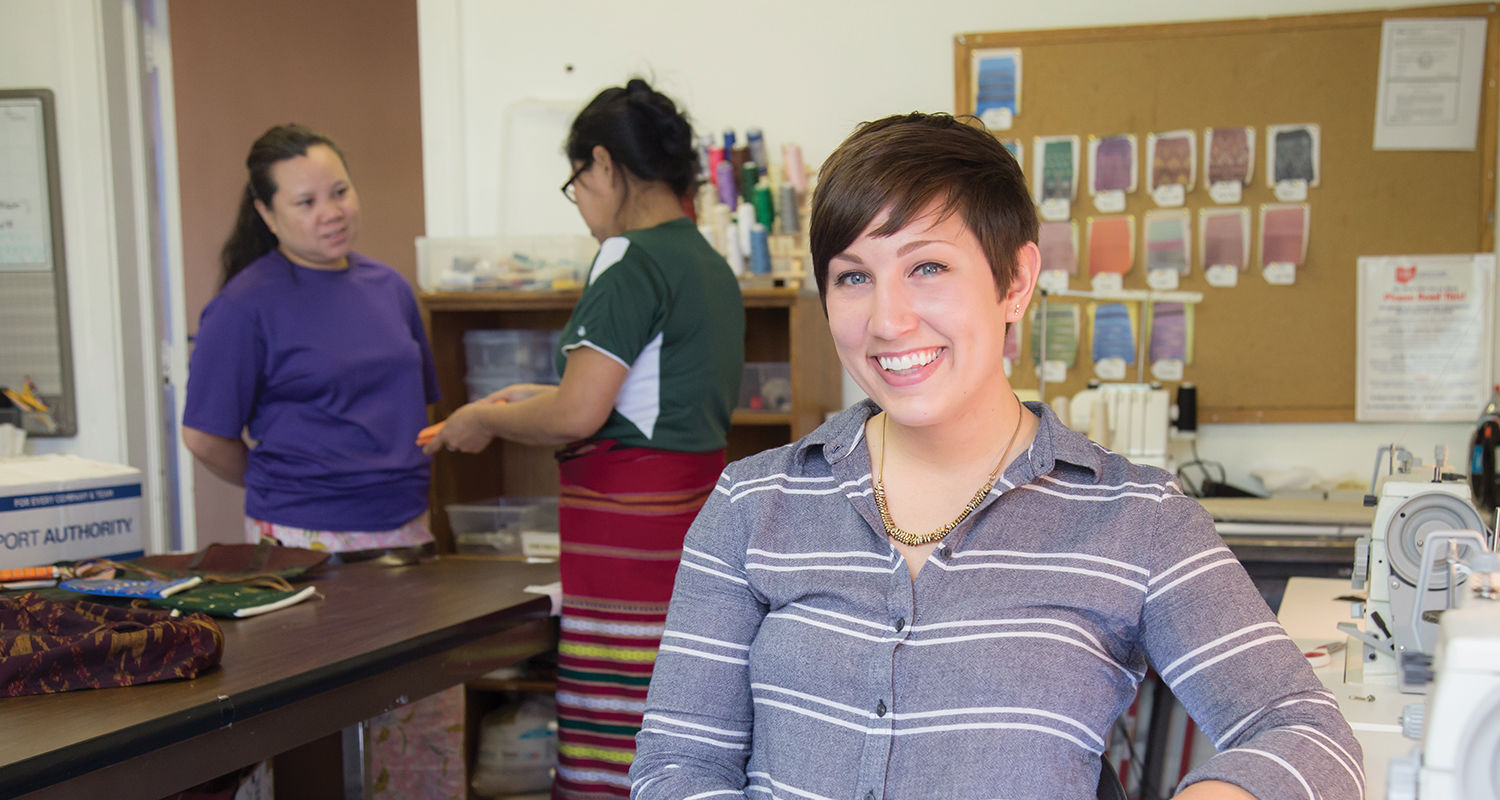 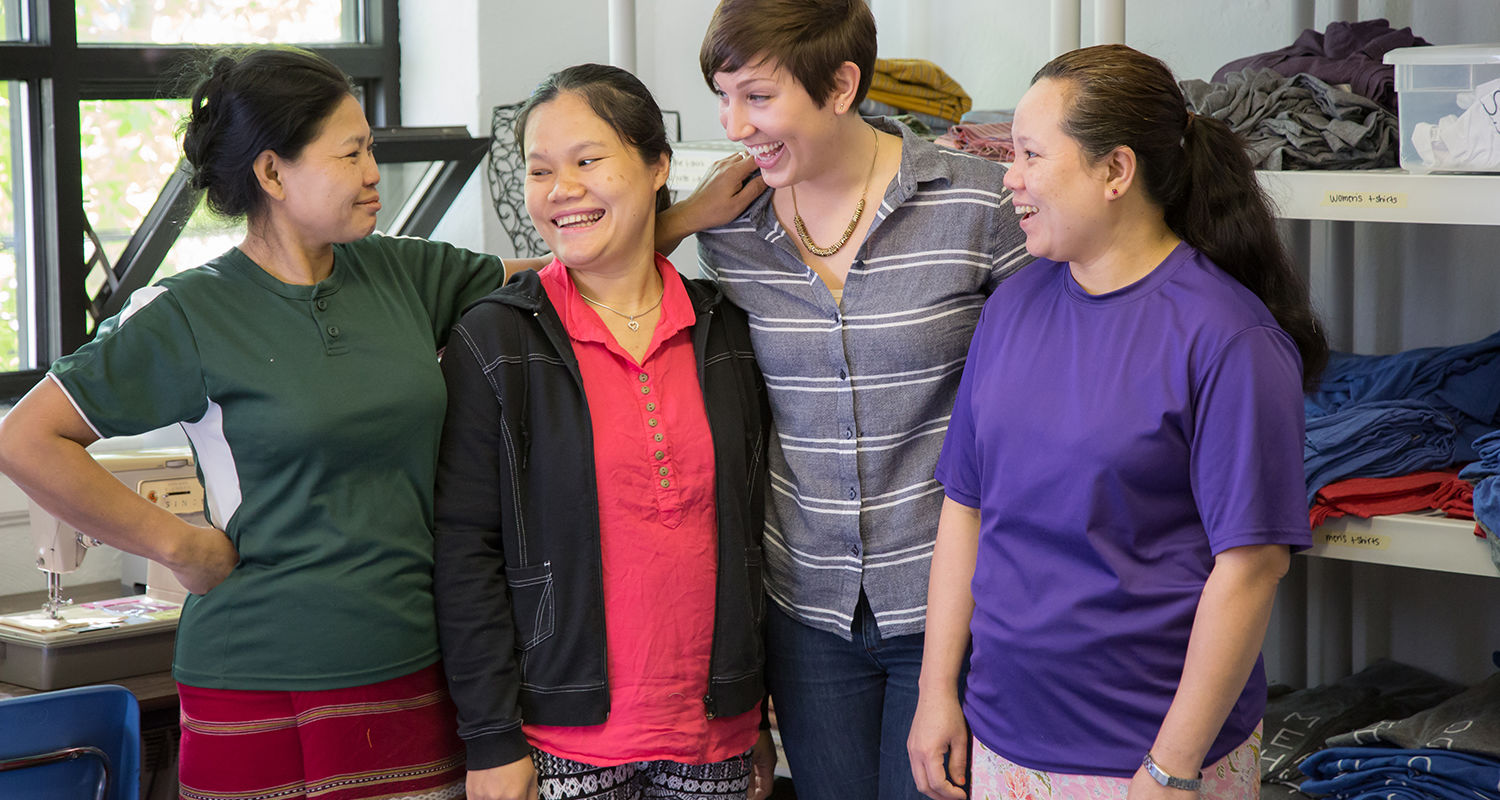 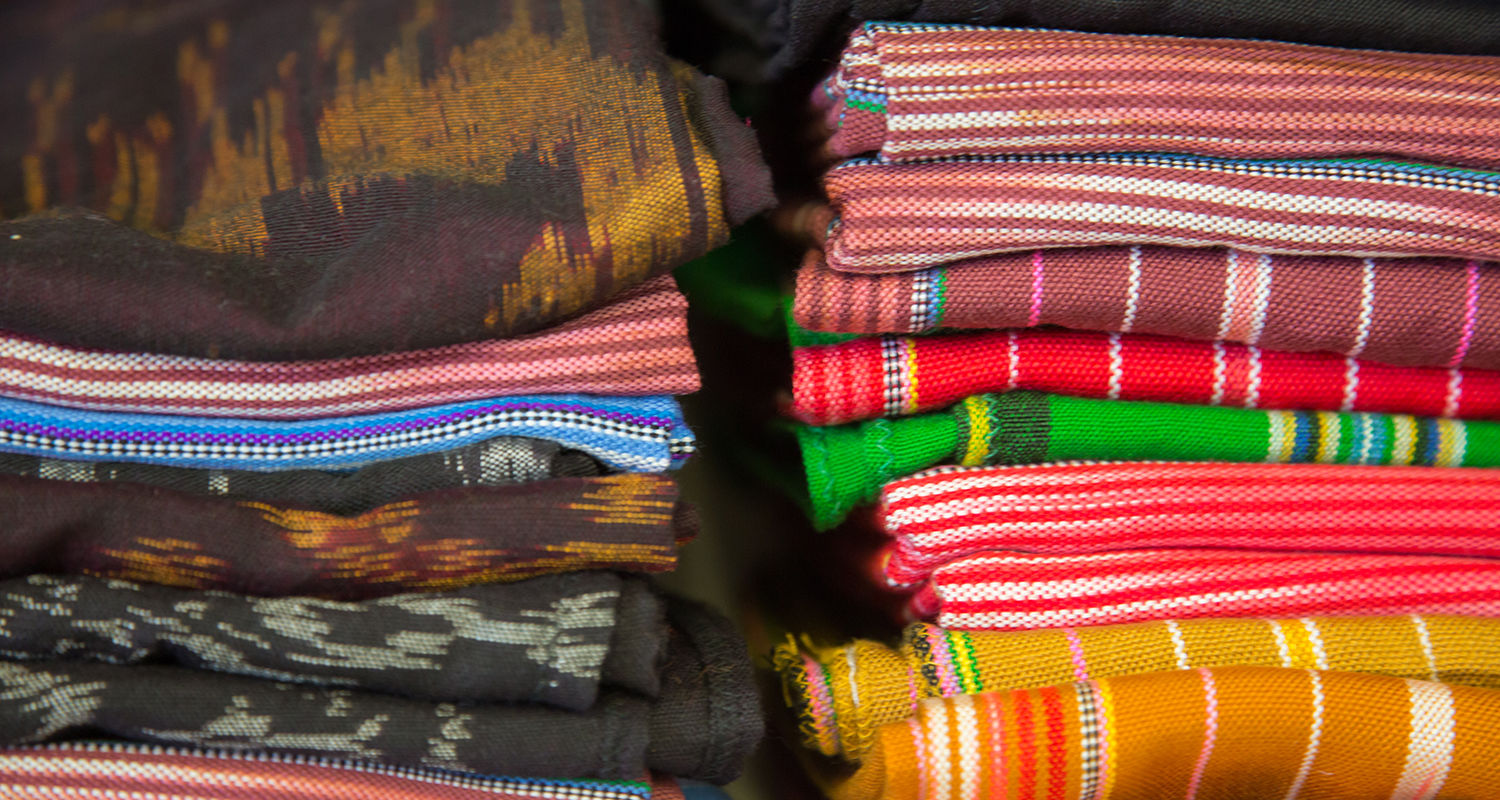 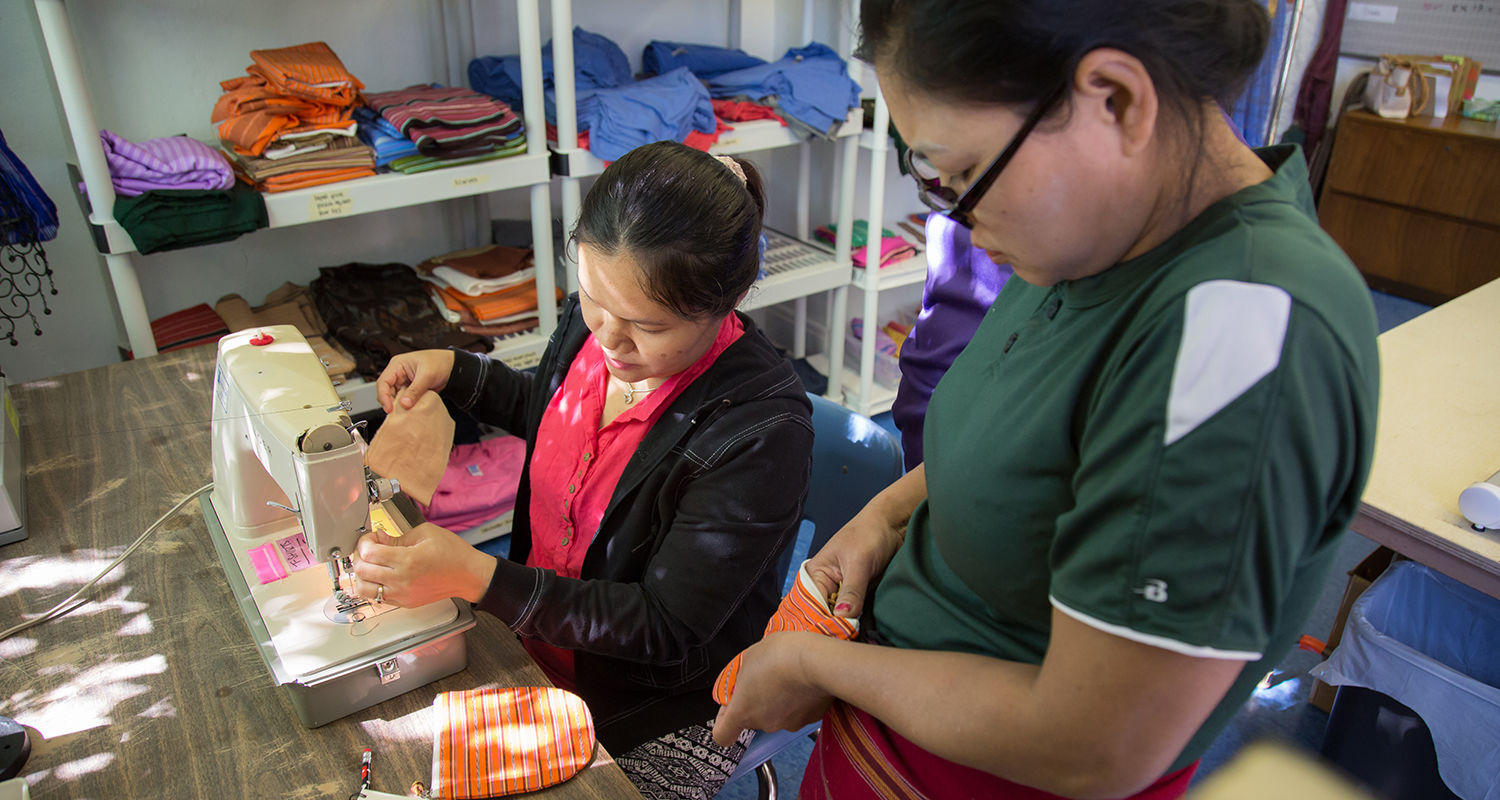 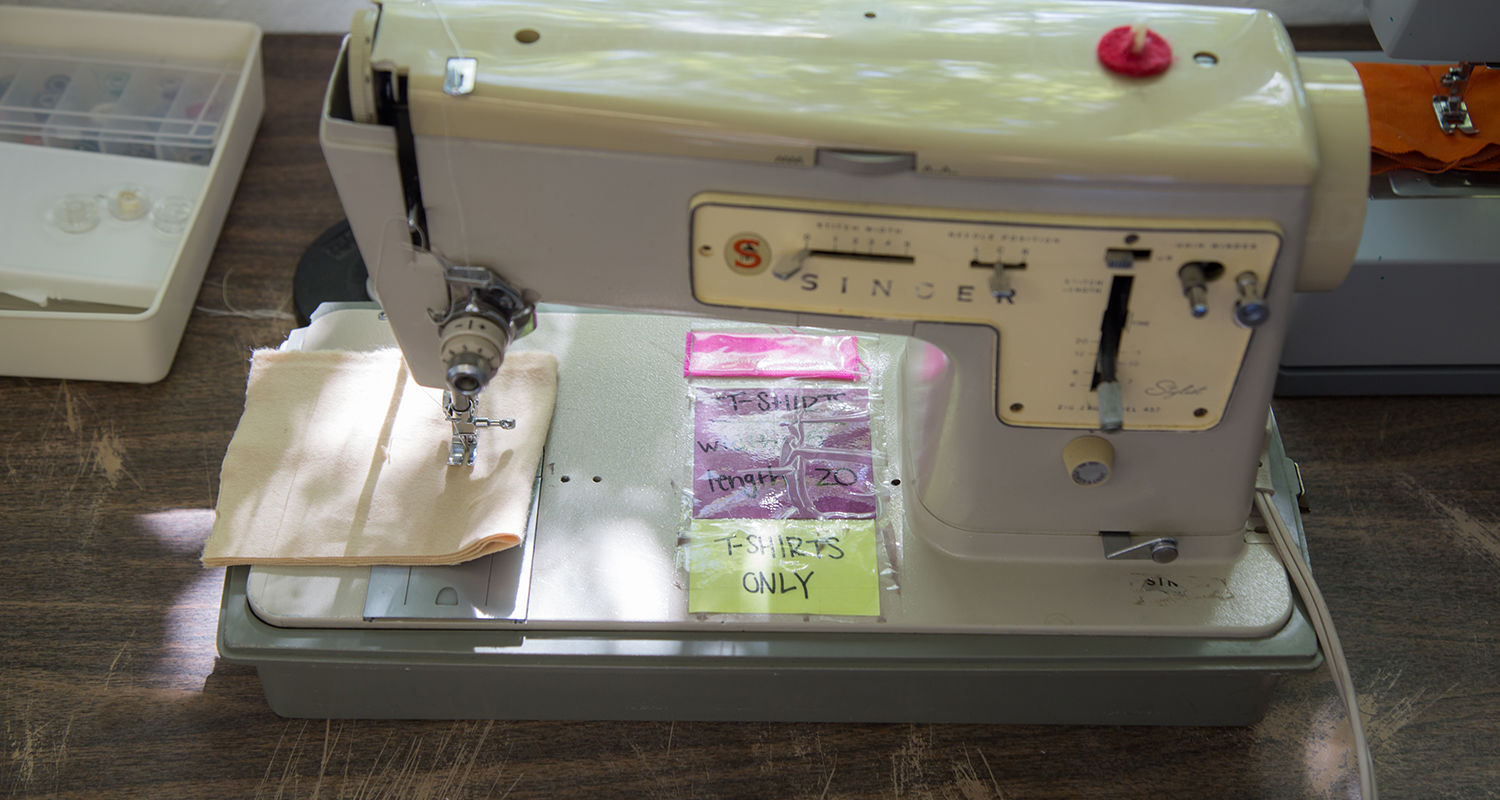 Kent State alumna Tessa Reeves doesn’t have to travel across the world to help refugee families who have fled cultural persecution. She’s created meaningful work for some of them right in their Akron resettlement area—and she plans to expand the business.

“I’ve missed them so much,” says Tessa Reeves, B.S. ’13, heading to the door to greet three employees of her small clothing company, Neighbors Apparel, with hugs.

With a full-time job as a corporate merchandiser, Reeves hasn’t seen the women—Karen [pronounced Ka-rin] refugees from Burma and Bhutanese refugees from Nepal—in about a week, which is too long for her.

“I’m not comfortable just telling them what to do when I’m not here,” Reeves says. “I want to be more like their friend than their boss.”

In a small, light-filled room at Urban Vision—a Christian ministry housed in a repurposed church in Akron’s North Hill neighborhood, a refugee resettlement area—the women spend their mornings sewing apparel and accessories for the 2-year-old business, often after working the night shift until 2 a.m. at their factory jobs.

For now, the women of Neighbors Apparel only work as needed, from 9 a.m. until noon most days. But the long-term goal is to build a profitable business and employ the women 40 hours a week doing something they love.

Using fair-trade fabrics sourced from Thailand, the women create contemporary fashions with a cultural flair that are sold in about 20 local Ohio shops, as well as on the website, www.neighborsapparel.com. The biggest sellers are infinity scarves and T-shirts with fabric patches in the shape of Ohio.

Head seamstress Ka Naw’s sewing skill allowed her to make an income while living in refugee camps in Thailand before she resettled in Akron, and she has trained several women who work at Neighbors Apparel.

“I don’t really sew,” Reeves says. “The women make this beautiful product. I just get to sell it, market it and run the website—but they are the true talent.”

Managing a start-up clothing business wasn’t what Reeves had in mind when she was studying fashion merchandising at Kent State.

“My junior year I interned at Elle magazine, working in their fashion closet, and it was great,” she says. “Once I was done with my internship, I couldn’t justify leaving New York City, because I felt I was on the cusp of my career.” So she stayed and landed a coveted internship at Vogue magazine, a fashion student’s dream.

But three weeks into working there, Reeves had a life-changing moment. “An intern lost an $11,000 dress in Manhattan, and people were running around like chickens with their heads cut off,” she says. “This missing dress was getting much more attention than the serious social problems happening right outside our doors. And I thought, I can’t give my life to this.”

She finished out the week, then sat in a coffee shop for three hours that Sunday, praying and re-reading the email she’d written that would sever all ties with Vogue and Condé Nast before she hit send.

Back home in Ohio, Reeves completed her senior year at Kent State while volunteering at Urban Vision, drawn to their community development mission. It was her first introduction to Akron’s refugee community, and she quickly grew to love the neighborhood outreach. “I basically begged them to give me a position, I didn’t care what it was. I just knew I needed to be here,” Reeves says.

The leaders at Urban Vision knew of refugee women in the community who had a knack for sewing, and they wanted to incorporate those skills and help out the neighborhood families. “They offered me seed money and a space to start a business,” says Reeves, who was just about to graduate. “That’s when it all started coming together for me.”

“Our goal is to create employment opportunities for refugee women.”

With the help of Rodney Matthews, executive director of Urban Vision, and some online resources, Reeves came up with a business plan. She waitressed for 18 months while getting the business going, then took a full-time job to help pay back her school loans.

Although her 9-to-5 job keeps her occupied most days, Reeves hopes to be able to dedicate more of her time to Neighbors Apparel in the near future. “The women value relationships,” she says. “They don’t just want to show up, work and leave. They want to have a relationship with me. I would go back to waitressing if need be to make this work.”

It doesn’t look like she’ll have to do that. Reeves went through a 9-month program with SEAChange, a Cleveland-based social enterprise accelerator, and she was awarded $30,000 at a pitch contest they sponsored in May. She says it’s a “game changer” for Neighbors Apparel.

“It’s great validation for us,” Reeves says. “As a 25-year-old, it’s awesome to know that people think you can turn $30,000 into something bigger. I know how vast the fashion industry is. So why not build our brand as a for-profit business to support even more women?”

Along with expanding the business, Reeves hopes to educate Americans about refugees by connecting the products with real stories about the hard-working women who make them and want to contribute to their communities.

And besides hiring an official designer, she plans to go part-time at her current job so she can spend more time at Neighbors Apparel. “The women were happy about the grant,” Reeves says. “But I think they were mostly excited that I would be coming back to work with them.” 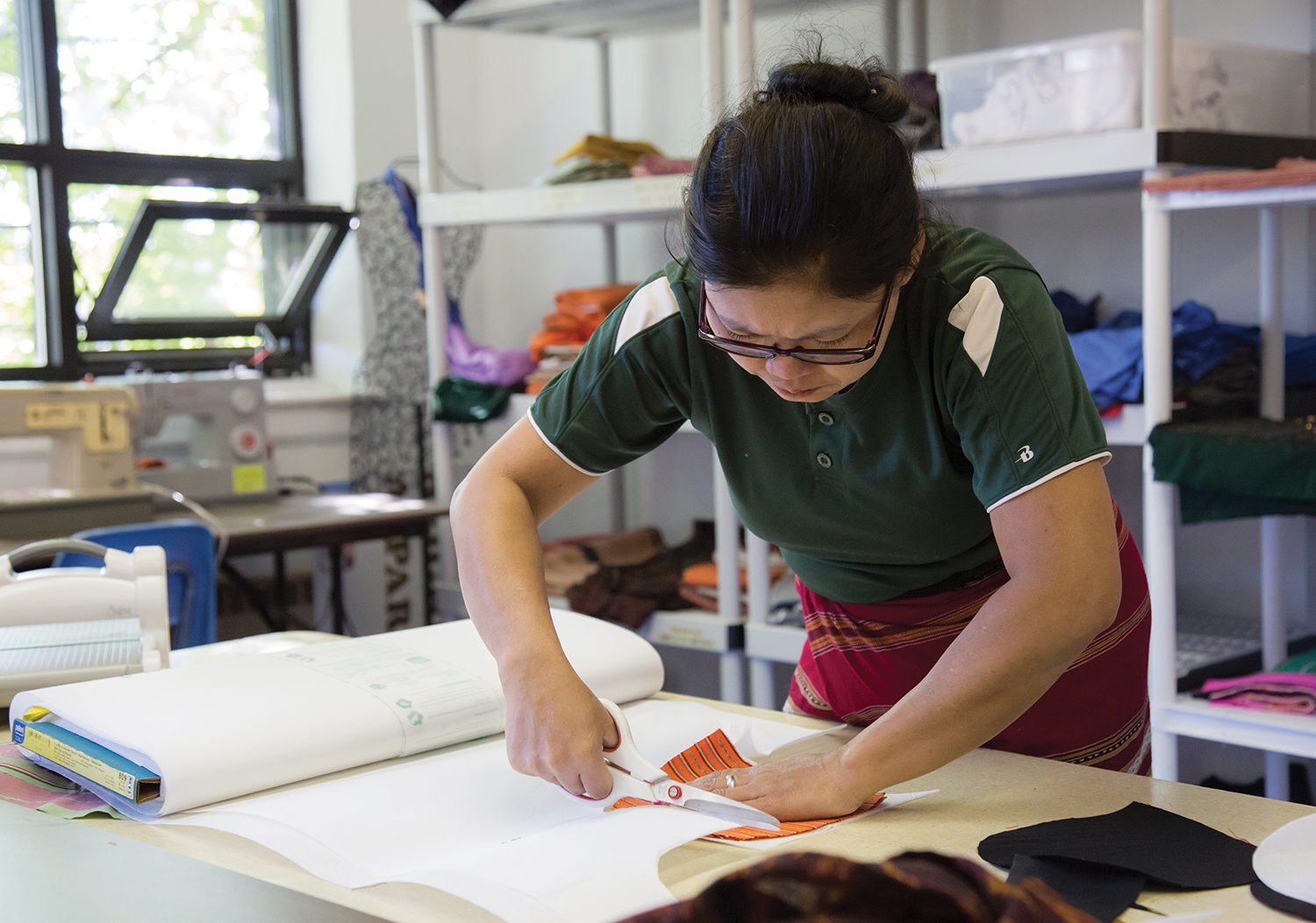 Head seamstress Ka Naw has been sewing ever since she was a young girl in Burma. She was the first employee at Neighbors Apparel, bringing her sewing machine with her. “At first we stuck with simple designs, but Ka Naw would suggest something I hadn’t even thought of,” says Tessa Reeves, founder of Neighbors Apparel. “It truly was a collaboration. Eventually we were able to purchase more sewing machines, but she still prefers her old one!”