With a hard-to-get beauty patent, alumna Gwen Jimmere is taking her line of natural hair products from the kitchen sink to the global market. 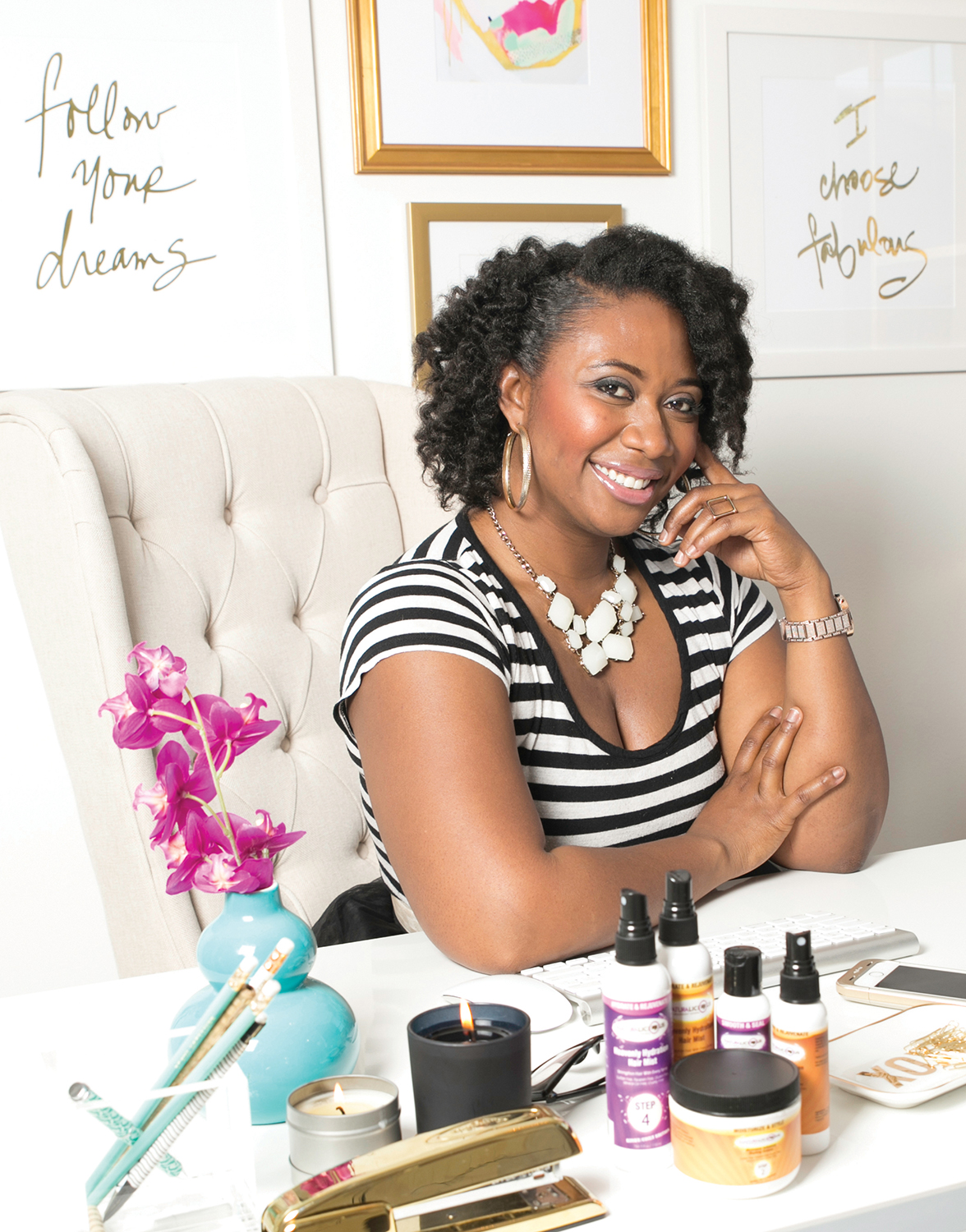 Gwen Jimmere ’03, MA ’08, recently became the first African-American woman in history to patent a natural hair care product—and she owes some of the credit to Chris Rock.

Catching a rewind of the comedian’s 2009 documentary “Good Hair,” a reflection on the love-hate relationship behind the $9 billion Black hair care industry, Jimmere was shocked by a scene in which Rock and a chemist dunk an aluminum can into a vat of hair relaxing ingredients, only to see it disintegrate in a matter of minutes.

“I’d been relaxing my hair since the third grade, so that really freaked me out,” recalls Jimmere, who decided to swear off the harsh chemicals while she was pregnant with her son in 2011. “I grew up in a household where my mom could make nearly anything she wanted by mixing oils and other ingredients to do different jobs,” so Jimmere began experimenting in her own kitchen sink, looking for natural ingredients that could do the work of the dozen or more products she once relied on.

Curious about the conditioning effects of natural clays—a cosmetic ingredient used for centuries—she found a source for rhassoul clay, a mineral-rich clay found only in Morocco’s Atlas Mountains. “The formulation was trial and error, but when I started working with the rhassoul clay, I was able to cut the time I spent on my wash day down from three hours to seven minutes, and my hair felt great. It was like I’d hit pay dirt.”

Similar rave reviews from friends and family inspired Jimmere, a global digital marketing director for Ford Motor Company and later their agency of record Uniworld Group, to set up a website to sell the four-step hair care line she’d named “Naturalicious” in 2012. Word of mouth spread so far that one day she got a call asking her permission to include her line of products in the gift bags to be handed out at President Obama’s second inauguration in January 2013. “When you hear the White House is calling you think, ‘Who’s playing with my phone?’ I thought it had to be a joke.”

“When I started working with the rhassoul clay, I was able to cut the time I spent on my wash day, and my hair felt great. It was like I’d hit pay dirt.”

But just a few months later, Jimmere got very serious about the side business in her kitchen sink when she got the news that her corporate gig had been eliminated in a restructuring—the same month she was finalizing her divorce. “If I’d had more warning, I might have been looking for other jobs, but instead I went right into survival mode,” she says, e-mailing her way into a pitch meeting with the management team of Whole Foods, which was just preparing to open their first location in downtown Detroit.

Fifteen minutes after making her case (“I came up with a four-step system that does the work of 13 products, so as you can imagine it saves you 80 percent of the time and 60 percent of the money that you would normally spend…”), she walked out with her first retail contract.

“When they said yes, in my mind I just collapsed on the floor,” Jimmere says. “With everything that was going on at the time, I only had $32 in the bank and my mortgage was due in 15 days. So I pitched them like my life depended on it. I didn’t have the luxury of doubting myself or being afraid to approach a huge retailer.”

As Jimmere’s business began to scale out of her kitchen, into her basement and on toward shipping fulfillment centers, she knew she didn’t want to take on additional debt—a mistake many small businesses make. Instead, she took to the stage, winning the top $10,000 prize at the 2014 Black Enterprise Elevator Pitch Contest, which was held in Columbus, Ohio. It’s one of several “Shark Tank”–like competitions she’s used to build up her bottom line.

“I’ve been thrilled to watch Gwen and her business grow and mature,” says author and entrepreneur Lauren Maillian, a venture capital investor and co-host on Oxygen’s new startup-focused TV show “Quit Your Day Job,” who met and coached Jimmere at that first pitch event. “She’s doing everything on a bootstrap budget, but she’s found some very inexpensive ways to get the things that are important to her done, and she gets them done well.”

That D.I.Y. approach drove Jimmere to secure a patent for one part of her haircare line, a business move prompted by frequent encouragement from her mother. “She kept telling me, ‘You’ve invented something incredible, but someone is going to do what you’ve done and make millions off your idea if you don’t patent it. You’ll see other people on TV, making all this money, and the only thing you’ll be able to do is be upset because you didn’t protect your invention.’ Finally I thought, ‘Wow, she’s right.’”

Though Jimmere had secured several trademarks on her own, she knew hiring a patent attorney was out of her price range. Instead, she took advantage of Detroit’s new regional United States Patent and Trademark Office that opened in 2012, a first-of-its kind entrepreneurial incubator made possible by Obama’s America Invents Act.

“It was like going back to Kent State,” she says. “I spent nine months making friends with librarians and learning everything I could about how to properly draw the design and research prior art, which is anything that resembles or has the same utility as what you’re trying to patent. In 2015, it’s extremely hard to invent something unlike anything that’s ever been invented before. But I did invent something brand new and was able to prove it, which resulted in the patent being issued to me.”

Now with a five-year-old son and a haircare line finding its way into global markets from South Africa to the Bahamas, Jimmere has launched another sideline, Pitch Proof, a consulting firm aimed at teaching other aspiring entrepreneurs some of her secrets.

“So many people talk themselves out of their dreams by thinking, ‘What if people don’t like me, or my product, or my idea?,’” says Jimmere. “It’s fear of rejection that makes people only imagine the negative, but we hardly ever ask ourselves, ‘What if everybody loves it?’ I figure, if I try and fail, the worse that will happen is I’m in the same spot that I was before I tried. So why not try?”∼

Laura Billings Coleman is a writer and editor based in St. Paul, Minnesota. 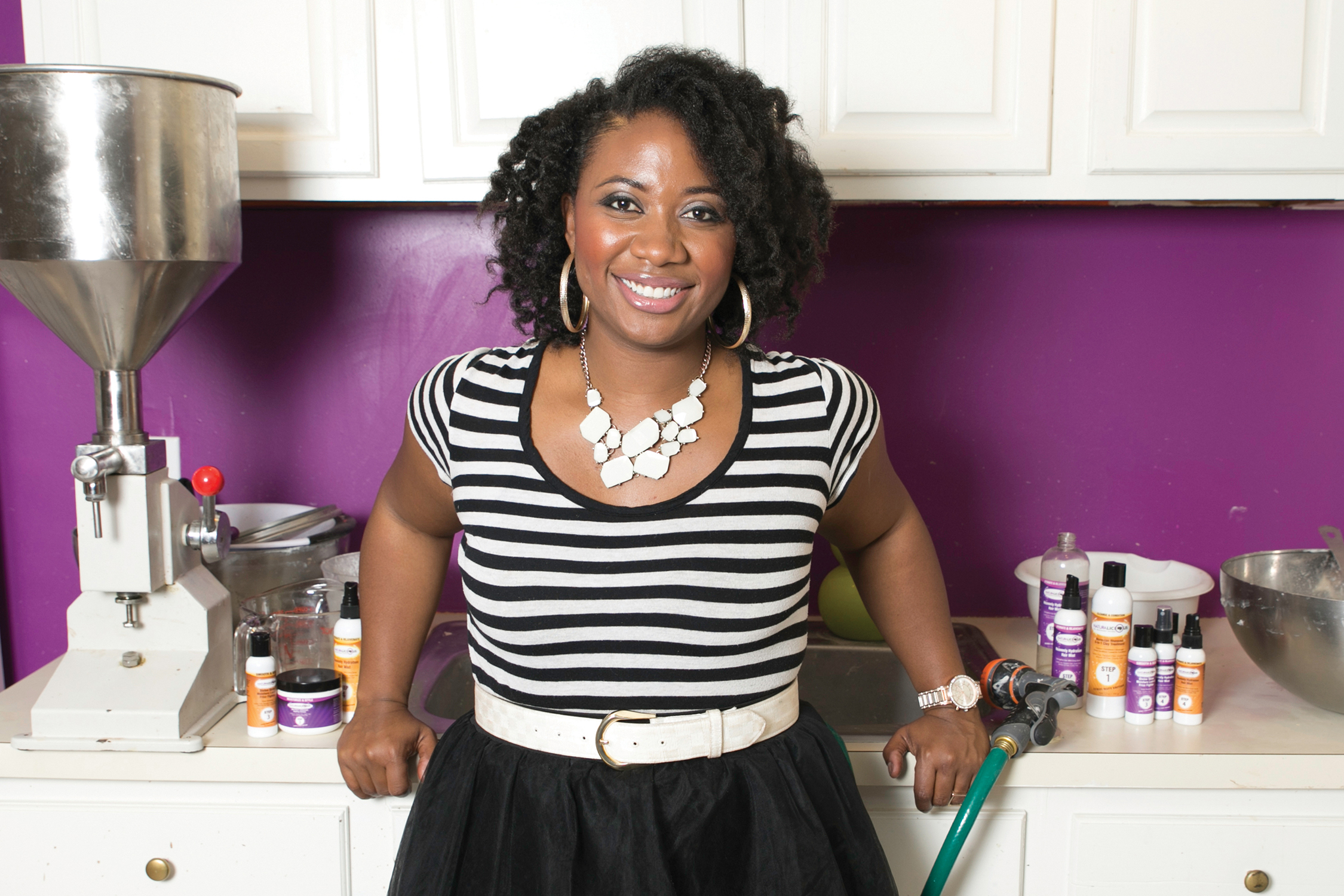 Gwen Jimmere once made all of her Naturalicious line by hand, with packaging she designed herself. But her business was able to take off when she hired more help. “The best advice I ever got from one of my mentors was, ‘Get out of the basement.’”

“Whatever the reason you haven’t started your business yet—you need to save up more money, you need to get the kids out of the house—there’s never going to be a perfect time,” says Jimmere. “Instead, start where you are, work with what you’ve got and just get it going—maybe testing the market with two products instead of 50. I call it ‘investing in your greatness,’ and if you’re scared to invest in your plan, you can’t complain when you’re still in the same place next year. Waiting is not a wealth strategy.”

“Waiting is not a wealth strategy.”

Hire the help you need

Though Jimmere once made all of her Naturalicious line by hand, with packaging she designed herself, “At one point I realized I was spending six hours a day filling orders and keeping up,” she says. “The best advice I ever got from one of my mentors was, ‘Get out of the basement.’ My business couldn’t grow if I had my hands in everything.”

Though she still manages her business day-to-day, Jimmere also depends on a fulfillment center to ship orders and a call center to answer customer questions. “I’m still bootstrapping, but getting extra help allows your business to scale.”

Reality TV shows may spotlight the inventors with compelling personal stories, but in real-life pitch competitions, investors are more interested in the bottom line. “Judges want to know how they’re going to make ten to twenty times their money back, so my strategy is to answer all of those questions before they even have a chance to ask,” Jimmere says. By the time you’ve led the judges through their return on investment, you’ll be able to hit a softball question like “How’d you come up with this idea?” right out of the park.

Don’t take on too much debt

“Studies have shown that women and minority-owned businesses take on personal debt to grow their business far more than other businesses,” Jimmere says. “We’re taking out loans, home equity lines of credit, credit card debt, because we’re in the daily grind and not thinking about other ways to get it done.”

Instead of hiring expensive PR firms to get the word out about her product, Jimmere has relied on social media and her own storytelling savvy to get publicity in several online publications, including Fast Company, Entrepreneur and the Huffington Post. “Exhaust all the alternatives before you spend money you don’t have.”

“Exhaust all the alternatives before you spend money you don‘t have.”

Securing a patent is a high hurdle for any inventor, but Jimmere believes it’s important to protect your intellectual property. “It’s easy to be on the hamster wheel of running your business day to day, without thinking about the future,” she says.

Securing a patent gives her the leverage to sell her business someday, but hang on to her invention. “Owning a patent or a strong brand trademark can set you and your family up for wealth for generations to come,” she says. “Just think how much Nike could make with the swoosh alone? It’s crazy.”

Listen to your customers

Businesses that ignore customer complaints do so at their peril. “You need to respond not just to the person, but to everyone else who is looking to see how you’re going to handle it,” says Jimmere, who’s had two complaints since Naturalicious hit the shelves at Whole Foods in June 2013.

“I turned the complaints around so well that one of those customers invited me to her wedding in July, and the other is now a huge fan of the company. A basic human need is to feel appreciated—show your customers that their business matters to you.”