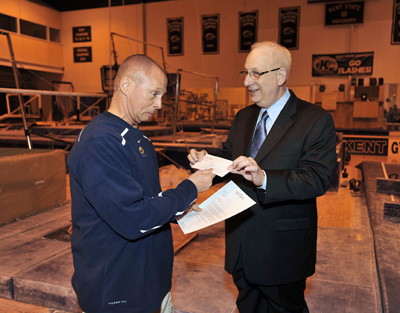 Biggin has been with Kent State more than 30 years, first as an undergraduate and graduate student, and later as the gymnastics coach. In 2010-2011, he led the women's gymnastics team to its first-ever appearance at the NCAA Women's Gymnastics Championships. This accomplishment was not only the first in Kent State history, but also the first in the Mid-American Conference. Kent State also hosted the championship and Biggin was named the NCAA Women's Gymnastics Coach of the Year. Biggin was also recognized for being committed to student academics and community service. The women's gymnastics team continually averages a team GPA of 3.3 or above and team members raised more than $10,000 during their Flip for the Cure pink meet last February, to benefit the JD Breast Cancer Foundation. 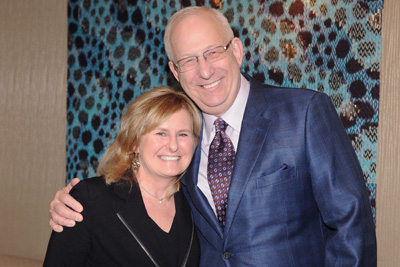 Carlton’s nominator described her as “an invaluable asset to the university” and said “the university is a better place because of her.” She was recognized for serving as a leader and mentor to the Undergraduate Student Government for nearly two decades, and increasing her duties last year to include coordination of several large student-centered festivals, including FlashFest. She was cited for taking on the role of coordinating speakers and musical acts and streamlining the approval process for contracts. The result was better musical acts and speakers for the students and more efficient use of student activity funds. Carlton was also recognized for her part in helping establish the "rental bike" system, and bringing the popular singer Bruno Mars to campus. 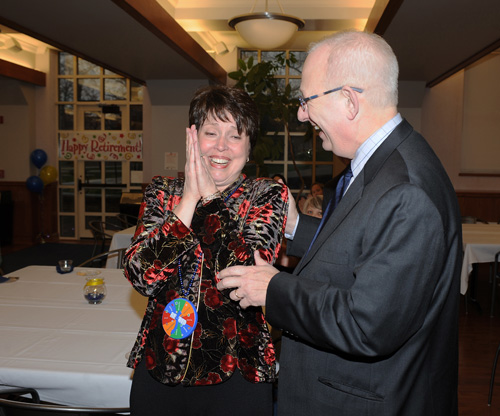 Casher was nominated by a colleague for her exemplary support and service to the university, particularly with the management of personnel records in the Banner system. She was recognized for her leadership as the Human Resources representative on a number of critical Banner committees, for developing, testing and implementing new electronic workflows in Banner and for her work on developing the HR Enterprise Data Warehouse. The nomination also cited her devotion to duty, commitment to the university’s goals and her steadfast and unfailing service. Casher retired from Kent State last month, after 30 years of service.

Nominated for: Quality Customer Service, Diversity and Inclusion, Serves as Ambassador for the University, Student Success 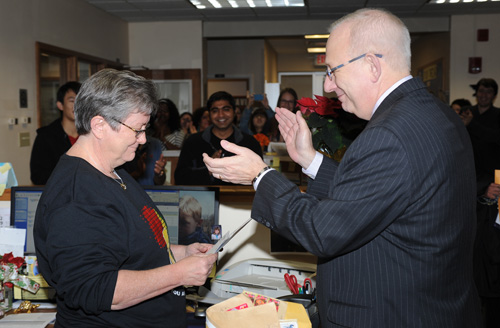 Cunnagin received 16 nominations from colleagues, supervisors and students. She was described as “an amazing person,” “exceptional,” and “always welcoming to students and co-workers.” Many nominators pointed out that she treats the students as if each one is a family member, and even offers her home as temporary housing for international students until they can find housing. She makes all international students feel at home, whether it’s with a hug, or telling them “you’re the best.” Cunnagin’s nominators also noted how she helps students get acclimated to their new environment, sometimes taking them to the grocery store, bank or furniture store.

College of Arts and Sciences

Nominated For: Collaboration, Effectiveness and Efficiency and Quality Customer Service 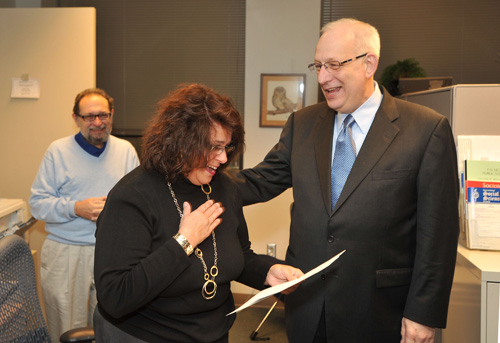 There were 32 nominations for Decker from students, faculty and co-workers. The nominators spoke of her effectiveness and efficiency during the merger of Justice Studies into the Sociology department. She was cited for anticipating issues and solving them before they impacted others, and helping the Justice Studies faculty and staff feel at home in their new location. Other nominators noted that Decker is efficient, cooperative, quick-thinking and often goes beyond what is required to make sure the job is done efficiently and well. She was described as “one of the best, if not the best, secretaries on campus” and a “treasured staff member of Kent State.”

College of Communication and Information 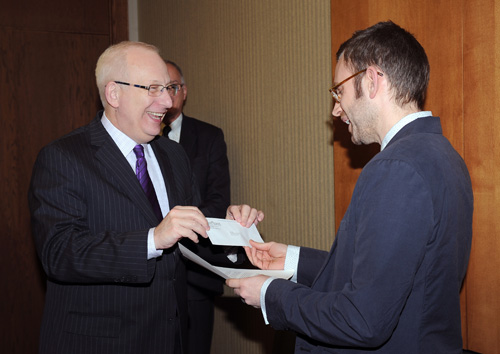 Hollis received six nominations from faculty in the College of Communication and Information. He was recognized for his expertise in developing online courses and programs, and in particular, leading the technical perspective of the School of Journalism’s new online master’s degree in public relations. One nominator stated that his student-centered focus and design enabled the program to grow from zero students to 100 in the span of 18 months. Hollis was described as an exceptional employee who truly exemplifies excellence, and one who is able to work with college faculty and their varying degrees of technology savvy in the development of online courses. 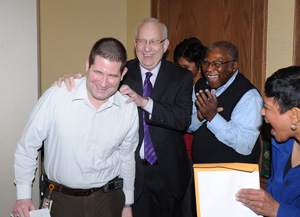 Huston received four nominations from his colleagues, who recognized him for his broad knowledge of the university’s computer systems, as well as the various wireless and iPad, etc., nuances that exist today. Huston was described as not only being knowledgeable, but also quickly putting that knowledge into solution mode. He goes above and beyond, not only with his immediate response to any and all issues, but with his professionalism and cheerful attitude. A nominator also cited his work in helping staff in the Executive Offices make the transition to Apple computers and another nominator described him as “the epitome of customer service.”

Nominated for: Diversity and Inclusion 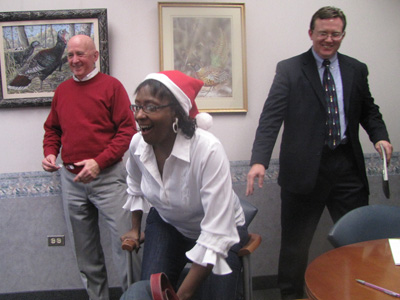 Longmire was nominated by a faculty member for her exemplary activities to bring students from diverse populations to Kent State University at Geauga's Twinsburg Academic Center. This includes her willingness and dedication to promote outreach activities geared to the local African American community. She promotes opportunities to engage with students who otherwise would not consider furthering their education. She also works with campus faculty to promote an accepting environment for all students. Longmire was also recognized for being a generous colleague and described as being “one of the reasons why Kent State University is a great place for all students, faculty and staff.” 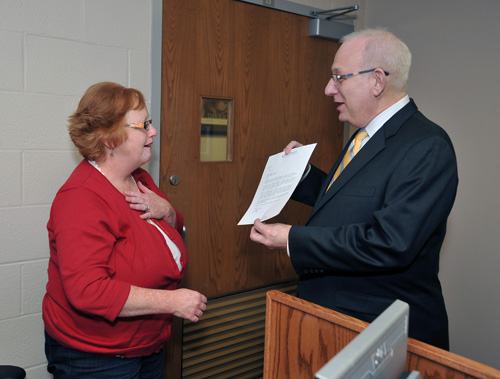 Miller was nominated for spending untold hours, -- many, many hours beyond her "normal" work week -- to help make emerging technologies within the classroom accessible to students with disabilities, specifically those with sensory impairments. This involved labor-intensive work to accurately convert on-line materials to be accessible to screen-readers for students who are blind/visually impaired, and converting audio material to closed-captioning for students who are deaf/hard-of-hearing. Miller was recognized for devising a way to streamline the closed-captioning process so that it reduced the amount of turn-around time required to get the materials to professors for use in their classrooms. 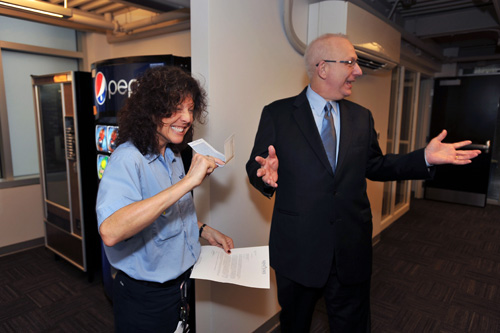 Schumann was nominated by her director and her supervisor, both of whom described her as a “first-rate employee” and “one of our finest assets.” The nominations cited her favorite Suzie Orman saying, “stand in your truth,” and that she believes whole-heartedly in giving her all each day. Schumann was also described as being a key custodian because she has the expertise and capability to be versatile and work in any building needing her services. She is a team player that her co-workers look up to and go to for guidance. She was specifically cited for completing the summer task of deep cleaning at DeWeese Health Center, even when her co-worker was injured and could not help her.