Picture a four-year-old girl. Short pixie haircut, crooked on one side because she cut it herself. She’s a ball of energy, loud and laughs with her belly. She hates naps and always fights her bedtime. And before she falls asleep every night she wishes for a family.

She is a foster child. In this photo, she is at one of her foster homes. She has been in and out of the foster care system since she was born—little stability and little consistency.

I still remember that foster home. Mostly, I remember the Sesame Street stuffed animals that brought me a bit of comfort as I cuddled them every night. I remember crying when I was sent to a new foster home—not because I was leaving, but because my foster mom wouldn’t let me take the stuffed animals with me. I’m not the only one to experience this . . . it’s a small peek inside the life of a foster child.

In 2015, 427,910 kids in America were in foster care. That’s enough to fill the Horseshoe Stadium at Ohio State University four times over. And do you know what most of these kids put their belongings in when they are being taken from their family and brought to a foster home? A trash bag.

What kind of message does that send them? What do you put in a trash bag? Spoiled food, disgusting garbage, things you don’t need or want anymore. And once it’s tied up, you don’t want to open it again. But at this scary and uncertain time in a child’s life, we throw their things in a trash bag and send them to some new home. We can do better than that.

Flash forward to when I was a senior in high school, leaving my adoptive family’s home when things had not worked out. I found myself again moving to a new home—nearly 14 years later and still using trash bags.

I had no clue where my life was going or what I was going to do next. But my best friend and her family opened their home to me. And then her parents did something that changed the course of my life. They cosigned a loan that made it possible for me to come to college. These incredible people believed in me, and with that signature they gave me a shot at a better life.

Since then, I have wanted to do whatever small part I could to give foster children some hope that things will get better. When I got to college, I started interning with an amazing nonprofit called Together We Rise. Their mission is to change the way foster kids experience the foster care system.

During my internship, each intern was asked to raise $500 to replace trash bags with 25 duffel bags for foster kids—duffel bags known as “Sweet Cases.” It seems like a small thing, but small things make a huge difference. Foster kids aren’t trash, and they should be able to move from one house to the next with a little bit of dignity.

So I gave fundraising a go. I could have just explained the facts, like one duffel bag is $25 and that’s about five cups of coffee. But I figured the best way to ask people for their money is to tell them why it’s so important to me and why it should matter to them, too. I stood in front of my sorority, and for the first time in college I just laid it out on the table. And because I told my personal story, it made it personal for them, too.

In the end, I was overwhelmed by support. People donated over $4,000, and more than 150 kids put those trash bags where they belong—in a garbage can. They got to trade them in for some sweet duffel bags with a stuffed animal and blanket that they could take with them from one foster home to the next.

After that internship, I started letting go of the mentality that I was a victim of the system and started realizing I was a fighter. It set me free to react differently.

Being a fighter meant fighting for foster kids to have a better experience. When we can create something positive from our own negative experiences and help others, it’s healing, restorative and empowering.

This idea played out in a larger role when I was accepted to the Foster Youth Internship program in Washington, D.C., an internship designed for foster youth to embrace their past in order to empower current and future foster youth.

I spent 10 weeks working for a Senator on Capitol Hill, learning about policy while researching and writing policy recommendations based on my experiences in the foster care system. My fellow foster youth interns and I had to rewind to some painful memories in foster care, think about what could have made a difference for us and then recommend some policy changes that would make the foster care system better for the future.

We were empowered and on fire to make a difference, to be a voice for the kid that was still buried deep inside us, to be a voice for this vulnerable population and show them that we are not just a product of the foster care system. We have the power to rethink our worst experience and react in a new way. And so do you.

Our most painful experiences and stories can be the driving force for the most positive change.

After 10 weeks working with the Senator and the Congressional Coalition on Adoption Institute, eleven of my peers and I sat in two different briefings in the United States Capitol Building and the White House. We told our stories to members of Congress and to the Domestic Policy Council, and we made policy suggestions. Not every recommendation was implemented, but since the Foster Youth Internship program started in 2003, numerous pieces of legislation have been passed based on the personal stories of foster youth who were fearless and brave and used their story to demand change.

A lot of the time we are ashamed of some of our past experiences or where we came from. We’d rather not bring it to light. But one of my favorite quotes is, “You were assigned this mountain to show others it can be moved.”

That little four-year-old girl in the photo could have been another number on the long list of statistics because of where she got her start in life. But I’m here today—thankfully with no crooked pixie haircut—still loud and still ornery and now fighting for other kids to have the family and the love they so rightfully deserve.

People tell me I’m “so strong” and that they would never imagine I had been in foster care. But my peers and I are strong, resilient and bold because we were in the foster care system. And for that I am proud.

Recently, I met a stranger and we started talking—and I told her a little bit about my past. She told me, “You are not meant to carry the burdens from your past, you are meant to carry hope.”

“Carry hope.” You know what my birth mother named me? Keri Hope.

So the next time you tie up a trash bag and carry it to your trash bin, I hope you’ll take a minute to think about a foster child who might be carrying a trash bag, too—but under wildly different circumstances.

Regardless of what you have been through, your worst experience could inspire the most positive change. One small act can make a big difference in somebody else’s life. I know it has in mine. 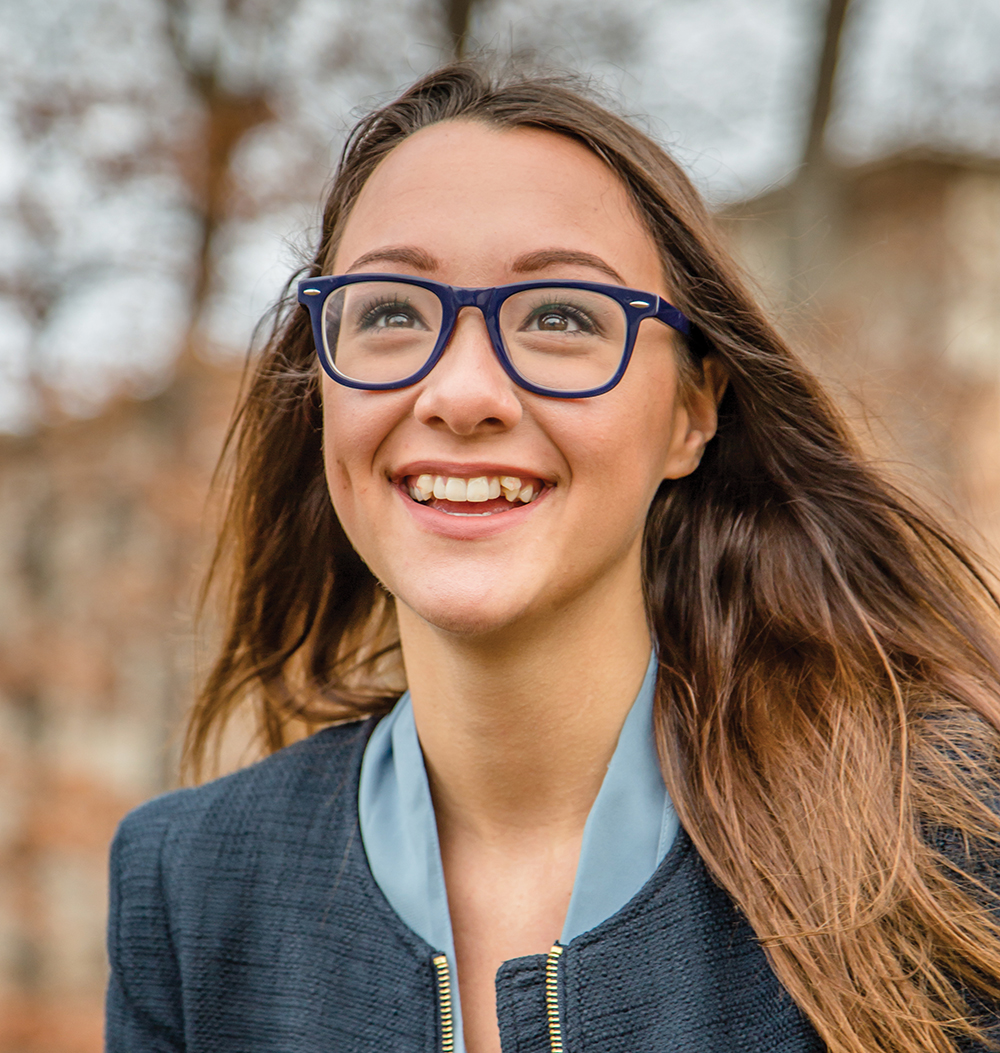 Keri Richmond is a senior public relations major in the School of Journalism and Mass Communication at Kent State. She recently was recognized as one of FosterClub’s Outstanding Young Leaders for 2017. Adapted from her TEDxKentState talk, February 18, 2017. Learn more at www.KeriHopeRichmond.com.