Growing up together in the small town of Mesopotamia, Ohio, Bill Clark and Margaret Reynolds appreciated the benefits of country living. When they decided to marry in 1951, they had already picked out a high spot among the rolling hills of Burton, Ohio, on which to build a home.

Bill was inquisitive and intelligent, and showed keen business insight. After serving in World War II, he went into banking, starting at the bottom and working his way up to president at the First National Bank of Burton. He and Margaret had two children, and both were actively involved in serving on committees, volunteering on boards and actively participating in the growth and prosperity of Geauga County and its residents.

The Clarks worked during the ‘60s and early ‘70s to help found the Kent State Geauga campus. Bill was on the board that worked to establish the campus. He realized the need for offering higher education to people in the county so that they could go on to become productive members of the community -- making the area stronger and a better place to live.

“No one was more respected in the county than Bill and Margaret Clark,” says Dave Day, director of advancement for Kent State University at Geauga. “They were instrumental in bringing higher education to this part of the state, and helped facilitate many partnerships between the university and local businesses to educate, employ and encourage people to stay and thrive in Geauga County.”

Bill was especially interested creating educational opportunities in the health care field that could employ graduates at area hospitals, specifically University Hospitals Health System Geauga Medical Center, where he also served on the board.

The Clark’s daughter, Mary Ann Aardema, calls her father an “out of the box” thinker and relationship driven. “Dad was a traditional banker who would see the vision of the people who came to him. He was personally involved. He really loved learning from other people. He always asked questions to get other people’s input and perspective — asked about their lives and motivations about their profession. He always wanted to know how they made the career decisions that they did, capturing something that could be of value later.”

The Clarks spent many years supporting various programs and renovations at Kent State Geauga, including updates to the library, the main entrance and parking lot, and the complete renovation of the commons area, which was named the William T. and Margaret R. Clark Commons in their honor.

An endowed general scholarship was established in Bill and Margaret’s names, which has benefitted many students who live in the area. One of those students is Ruth Leslein, a senior in the BSN nursing program at Geauga. Ruth grew up in the nearby Amish community and had many hurdles to overcome on the way to her dream. She had to obtain her GED and learn how to use a computer, among other things, and the Clark’s scholarship was there to help pay for her education. Ruth will graduate this year, and plans to practice nursing in Geauga County. “I know that this is my dream,” Ruth says. “I have not chosen a specific path to my career yet, but I fell in love with pediatric nursing during my clinical rotation last fall. Regardless of where my journey takes me, I will strive to honor those who have helped me on my way, including Bill and Margret Clark. My world is a better place because I know that there are people who care about their communities and those working towards a brighter future.”

Sadly, Bill and Margaret Clark passed away within five weeks of one another in 2010. Their children now oversee the Clark Foundation. Son Tom Clark says, “We’re grateful to be able to continue the legacy our parents started by meeting ongoing needs at the Geauga campus.”

Daughter Mary Ann adds, “We’d like to help others to realize their philanthropic goals and support their efforts to make a difference, too. We’ve met several of the students who have benefitted from the Clark Scholarship. To hear them talk makes it very personal for us. A scholarship often makes the difference between going to college or not. It truly changes lives. Giving people fresh starts or new careers – people who never dreamed that they could get a degree – is very rewarding.”

To make a gift or create a bequest to support a campaign, program or scholarship at Kent State, contact the Center for Gift and Estate Planning at 330-672-0421 or email us at giftplan@kent.edu. 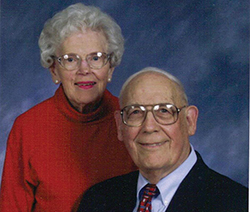