For many students, financial assistance is the deciding factor between graduating or taking time off to work -- and hoping to come back. Making a college education affordable is so vital that the students of Kent State University have started supporting each other.

FLASHanthropy was launched in 2006 as an way to provide all students with a chance to make a difference in the lives of other students. Since then, nearly $100,000 has been contributed and a new scholarship has been established which makes annual financial aid awards to eligible students.

"Through FLASHanthropy, hundreds of students have contributed to raise funds for Kent State affiliated groups," according to FLASHanthropy advisor and Assistant Director of Annual Giving Taylor Police (winner of the 2014 Kent State CSI Advisor of the Year award). "This money has also been used to create and endow the Pay It Flash Forward Scholarship. This biannual student scholarship is awarded to an outstanding student who demonstrates, through an essay, the importance of philanthropy in their life and for others. The scholarship has been endowed since 2011, and has so far been awarded to five students."

FLASHanthropy member Joe Cancelliere has been a FLASHanthropist for four years. Joe is a French Translation and Art History major, and one of his favorite sayings is, "les petits ruisseaux font les grandes rivières," which translates to "little streams make big rivers." Joe likes the phrase because, he says, he's been able to watch this happen over the years.

"Year after year, I've seen students give any amount they could to the Pay It Flash Forward Scholarship," Joe says. "And year after year, the scholarship helps a few lucky and hardworking students."

"This scholarship means a lot to me because for the most part, the money to fund it comes directly from the students," Megan said. "It's like my peers have chosen me as the one they want to support. It really means a lot." 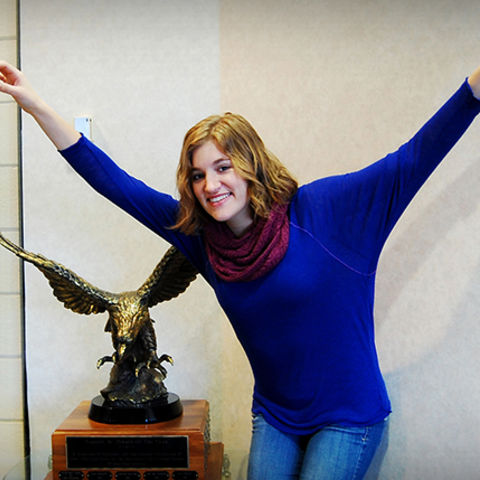