In 1964, when he was a player on Kent State’s football team, Bill Asbury suddenly collapsed during a practice run. Rushed to a local hospital, he was diagnosed with acute renal failure, and doctors worked diligently to save his life. Bill survived, and his teammates, coaches and friends helped him through a tough five-week recovery. His family never received a bill.

“That was a significant contribution made to me and my family by Kent State, over and above the academic and athletic scholarship,” says Bill. “After that, there was no ask too great in support of my alma mater.”

Bill has made two bequests in support of athletic scholarships, and he and his wife, Debbie, have recently made two additional commitments: a current gift to name a space in the Jenkins Academic Resource Center and a bequest, through their combined estates, for general athletic scholarships.

Debbie, although not a Kent State alum, is very committed to the university.

“Every time I hear that story about the support Bill received when he fell ill, that’s made an impact I’ll never forget. When people at an institution are that committed to a single athlete, that’s really impressive,” she says. “I have been going to events at Kent State for a number of years and am always warmly received and welcomed. That’s another reason why I feel it’s important to give that support to Kent State.” 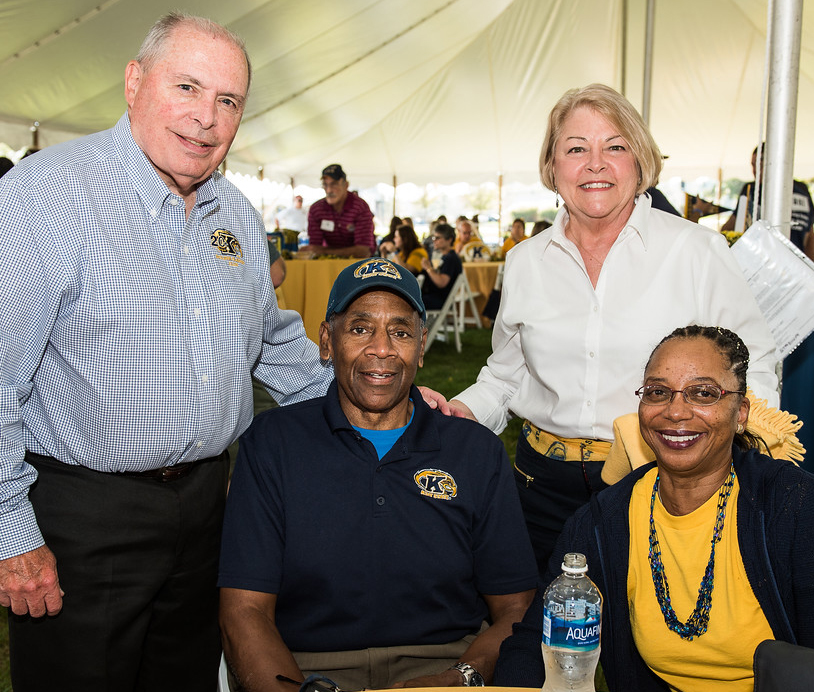 Bill, who is Vice President Emeritus of Student Affairs and a former Advisor to Golden Key at Penn State, and Debbie, who is a retired Ph.D. emerita faculty member and administrator at Penn State, have spent considerable time around students.

“The energy, diversity and enthusiasm of the student-athletes to pursue excellence in the classroom, in competition and in the community resonated with our values of academic excellence, community service and cultural awareness,” they said.

Bill believes that in order to commit your time, talents and resources to anything, you have to believe in it.

“It has value for you, and you, in return, want to help create or improve it," he said. "Anyone who graduated from Kent State has the opportunity to think back on their lives while they were involved, and to decide whether it was important to them. Kent State made a commitment to me long before I decided to support others at the university.”

Their values of personal sacrifice and commitment to use their talents to full capacity are in part what attracted Bill and Debbie to each other. “It works for us to encourage students to value those principles as well,” says Bill. Adds Debbie, “Our hope is that our example will help others who are alumni and friends find their passion and support it at any level they feel will help Kent State continuously improve and achieve its vision.”

If you’d like to learn how to create a bequest to support a program or scholarship at Kent State, contact the Center for Gift and Estate Planning at 330-672-1000, or email us at giftplan@kent.edu.

Read more about the impact of giving.