As an aeronautics major with a concentration in flight technology, Alex Johnson spends a lot of time around airplanes. In addition to working at the Kent State University Airport, she recently spent the majority of her day for four days in a 172 Cessna flying across county in the Air Race Classic (ARC) with Flying Flashes teammate Kenzie Alge. She has plenty of interests outside of aeronautics, for example, she cites a music class as one of her favorite university courses.

“Though I love learning about my future career, my favorite class has been Music as a World Phenomenon,” Johnson says. “Music is a big part of my life and learning about other cultures' music. How it differs from our western style is something that I normally would not have learned in-depth about if it were not for that class. It gave me a greater appreciation for the things differ from what we know as ‘normal’.” 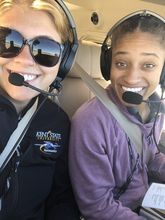 After graduation, Johnson plans on working as a flight instructor. After reaching the required hours, she plans to move to a regional airline.

“I’m not sure which one [airline] I would like to work at yet, but the end goal is to get a job with a legacy carrier,” Johnson says.

Currently Johnson is the president of the Organization of Black Aerospace Professionals (OBAP) and is a member of the Women in Aviation chapter. She sites her experience in the ARC as the most exciting in her collegiate career. The race has nine stops all over the country and included Canada.

“The ARC was definitely an experience of a lifetime and I’m so thankful for the opportunity KSU’s flight program gave me,” Johnson said.

She credits many people as being instrumental in helping or inspiring her, many of which are College of Aeronautics and Engineering employees working at the Kent State Airport.

“In particular my instrument instructor, Jaila Manga, greatly helped and inspired me to become a better pilot and person,” Johnson said. Manga was one of the first Kent State female pilots to compete in the ARC.

(Photo caption: The student on the left is Kenzie Alge; Alex Johnson is on the right.)

Back to Aeronautics and Engineering