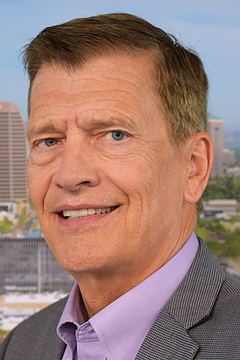 “One of my philosophies is trying to achieve one’s potential. I think all of us have more potential than we give ourselves credit for. Sometimes, one of the real great things in life now is seeing younger people develop in their careers, even our children, and letting them know their potential is unlimited.”

Matthew Likens, ’75, is president and CEO of GT Medical Technologies, Inc., based in Tempe, AZ. GT Medical Technologies, Inc. is a medical device start-up company with a mission to improve the lives of patients with brain tumors. Their first treatment, GammaTile™ Therapy, is an innovative, surgically-targeted radiation therapy for recurrent intracranial neoplasms. Likens previously held the same position at Ulthera Inc., which began as a start-up and grew to more than $100 million in revenue before selling to Merz Pharma in July, 2014, for $600 million. In 2015, Likens was named Entrepreneur of the Year by Ernst & Young for the Mountain and Desert Region.

After graduating from Kent State University, Likens began his career at Johnson & Johnson Corporation and soon moved to Baxter Healthcare International, where he spent the bulk of his 23 year career. During his tenure at Baxter, he held 10 positions with ascending levels of responsibility, culminating in the roles of president of Baxter Biotech North America and president of Renal Dialysis in the U.S.

Likens currently holds board positions for two medical device companies, including privately held Luma Therapeutics and publicly traded CHF Solutions. He serves on the Greater Phoenix Economic Council Healthcare Advisory Committee as well as the City of Mesa (AZ) Economic Development Advisory Board. Likens is a member of the Kent State Ambassador Crawford College of Business and Entrepreneurship Advisory Board and enjoys the opportunity to stay involved with his alma mater.

He and his wife, Nancy Saucke Likens (KSU, ’75), reside in Mesa, AZ and are active members of the First United Methodist Church where Nancy leads the church council, Likens is a member of the finance committee and they both sing in the choir. Their son, Greg Likens, is an accomplished sports-talk radio host in Miami, FL and their daughter, Alexa Likens Flowers, is employed by Medtronic Corporation. Alexa and her husband, Peter Flowers, live in Golden Valley, MN.