One Rainy Day in Kent

Our Story
I was a physics major at KSU and a member of the TKE fraternity. Kay was an education major and a member of AXO sorority. My fraternity brothers had volunteered to chair a "Road Rally" and couldn't attend the organizing meeting. Kay was the chair of Special Activities of the Student Activities Board, so it was her meeting that I was to attend. As it turned out, it was pouring rain and while I only had a short walk, Kay had to walk from her house on the other side of town to campus. No one else showed up to the meeting, so here I was with this computer person that was going to score the road rally using punched cards with times on them and this very attractive, but very wet young lady. The only thing I could think to do was to invite her to the "Hub". It was there that I introduced her to a "Huberty Special" (a.k.a. root beer float) that promptly "blew up" in her face when she opened the lid. When she let out this wonderfully hearty laugh and huge smile, I was hooked.

The Proposal and Marriage
When Kay was in her senior year and doing her student teaching in Cuyahoga Falls, she was staying with a teacher in the district. Having been drafted the previous October, I was home on leave. It was there on March 15, 1968 that I asked her to marry me. After saying yes she has always said to "Beware the Ides of March!" We were married on August 10, 1968 in Ann Arbor, Kay's hometown, at the First Presbyterian Church by our Campus Minister. Since I was still in the Army, we spent our honeymoon in New York City and drove down the Blue Ridge Parkway to stay in our trailer in Petersburg, VA near Ft. Lee where I was stationed for my tour of duty. 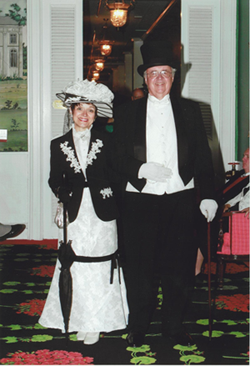