At the 2009 Tony Awards, Alice Ripley said in her acceptance speech for Best Leading Actress in a Musical that musical theatre “needs constant adjusting and tuning” to become a fine art. Ripley, who earned a B.F.A., can relate to this statement from the personal adjustments she made in college. She says Kent State University helped her discover herself and become an actress on Broadway.

“I think Kent State is part of who I am now and how I express my talent,” Ripley says. “I have some great college memories of becoming an actor and I learned a lot about how to be a grownup at Kent State.”

In addition to winning the Tony Award for best actress for her performance in Next to Normal, Ripley was nominated for her 1997 role in Side Show, and has been part of the original Broadway casts of such shows as The Who’s Tommy, Sunset Boulevard and the 2000 revival of The Rocky Horror Show. 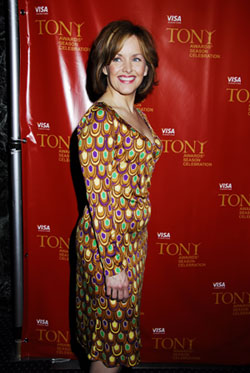 Ripley transferred to Kent State from DePauw University after Dave Heckert, ’84, her close friend, recommended the theatre program. Within the first year, Ripley accepted the lead role in the musical, Legend, which made it to the American College Theatre Festival (ACTF).  In addition, Ripley was nominated for an individual award, the Irene Ryan Acting Scholarship.

“We were all really excited that we made it to the ACTF, because I am not really sure that the idea of doing new theatre at the college level was really the norm then,” Ripley says.

Ripley says in college she never had big dreams and like many college students was unsure about the future of her career.

“I always had blinders on [in college],” Ripley says.  “At the beginning as an artist you don’t really know what you are doing, and it is intimidating. You have people teaching you and giving you advice. In the end you take what works for you and leave the rest.”

Despite not knowing what was in store for her future, Ripley continued to do what she loved and spent a majority of her time at the Wright-Curtis Theatre. If she was not at class, Ripley was usually singing in a practice room.

One of her most memorable summers was spent working at Porthouse Theatre.  Ripley says for someone who was not yet a professional, it was really challenging but a great experience at the same time.

Ripley credits her professors, especially Dr. Louis Erdmann, ’58, and Dr. Bill Zucchero, ’52,  as well as her family (Ripley is one out of 11 children), for serving as a strong support system.

“Lou Erdmann and his wife, Genie, were very inspiring and supportive of me to go out in the acting world,” Ripley says. “They were the super-team of knowledge, passion, guts, wit and soul. By their example of love and laughter in and around the theatre, my soul was fueled for flight.”

To show her appreciation to Kent State and the School of Theatre and Dance, Ripley and Jeff Richmond, who also performed with Ripley at Kent State and composed the music for NBC’s hit comedy 30 Rock, are serving as honorary chairs of an effort to name the school’s new black box theatre.

Ripley and Richmond co-hosted a fundraiser in New York City in April to help support the Black Box Theatre Campaign.

After the construction of the new state-of-the-art performing space in the Roe Green Center, the black box theatre will be named after Erdmann and Zucchero whose service to the school, particularly during the 1970s and ’80s, helped the program grow more than eight fold.

“It makes me really happy that Lou Erdmann and Bill Zucchero are going to be associated with a permanent part of the theatre because I knew both of them and they were very interesting teachers and talented directors,” Ripley says. “They were a personal inspiration to me and felt like family in college.”

Ripley also stays connected to Kent State by singing at events and speaking to classes. Students have the opportunity to communicate with Ripley thorough her Web sites, including Ripley’s Facebook page.

“I get so much out of talking to students and seeing their enthusiasm, Ripley says. “The energy is really great, and the students are just hungry. They really want to look up to someone who will have a good influence on them.”