Networking events are critical for professionals to keep in touch, stay on track or even get ahead. But these events can also be awkward.

After attending a networking event three years ago in New York, Ashlee Ammon called her mother, Kerry Schrader, ‘84, M.B.A. ’02, to tell her how it went. Ammon explained that during their lunch break they were encouraged to go find people with the same stickers on their nametag for networking. Ammon felt so uncomfortable with the idea of having to squint at people’s chests searching for dots that instead of connecting with other professionals, she just ate her lunch alone. 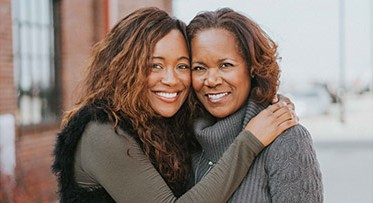 “If you’re already spending all of this money to attend this networking event, why wouldn’t you network?” Schrader says. “It’s not only a waste of money but a waste of time too. After hearing this, I saw the networking gap and so did Ashlee. We started brainstorming a solution, and the rest is history.”

Taking the Awkwardness Out of Networking
Their solution is Mixtoz, a networking mobile app. Its name comes from the combination of the words mixer and introduction. With Mixtroz, networking event coordinators can enhance their attendees’ experiences in real time. Event attendees can download the app to their smartphone or tablet for free and select their current event based upon their location.

From there attendees create a digital name tag, upload a photo of themselves and can start mixing. The administrator of the event creates groups and locations of the groups to meet. Once attendees enter their information, they will get sorted into their groups and be prompted to meet with said group at the predetermined location. This eliminates the awkwardness of searching for and matching stickers or colored dots. The app also collects data for the administrator based upon personalized questions.

Overcoming Barriers
Creating this app was no easy task though. Especially since neither Schrader nor Ammon have relevant tech experience.

“Ashlee and I created Mixtroz all on our own with many odds working against us,” Schrader says. “We are female, African-American and in a white-male dominated field. We raised $200,000 all on our own despite these huge obstacles.”

After realizing the potential in Mixtroz and raising enough money, the duo dedicated all of its energy into launching it. Schrader and Ammon both left their jobs and Ammon moved back home. Together they have been the only two running the app. From designing the app to promoting it on social media, they have only had each other.

“Being a startup means we don’t have the funds to hire extra help,” Schrader says. “It really has just been the two of us. We don’t believe that you should have to live in poverty to be an entrepreneur so we always had an end date just in case. At the end of the day you and your family still needs to have dinner on the table.”

Schrader said her time at Kent State was the most beneficial during her master program where she studied business. During that time, Schrader learned how to think more strategically when she did a study abroad trip to China.

“At Kent, I gained valuable skills not only in business but in time management too. My trip to China really allowed me to expand my horizon and gain confidence in myself,” Schrader said. “All of my experiences helped me be successful as a HR professional and now as an entrepreneur.”

Nationally Recognized
In November 2017, Schrader and Ammon entered a creative startup competition and out of 60 other applicants, Mixtroz was selected as one of only five to compete in the national competition held in Albuquerque, New Mexico. The team then traveled to Copenhagen, Denmark and competed in the Creative Business Cup Global Finals. They took home 1st place in the Invio Solution pitch.

In addition to making appearances at national competitions, Mixtroz was also featured in Forbes, twice and in many other publications.