Alumna to be Featured on Food Network’s “Christmas Cookie Challenge” for a Chance to Win $10,000

Congratulations to Leslie Srodek-Johnson, ’01, of Stan’s Northfield Bakery for bringing home the big win and $10,000. Leslie won the judges over with her cute Santa beard on a stick cookies. After the episode that aired on Monday, December 16, Leslie showed her appreciation to fans for all the congratulatory messages.

“I know my grandparents were watching me from Heaven and guiding me through this journey,” Leslie said in a Facebook post. “This is AWESOME! I cannot believe how many people that I have met through the years and that have moved all over the country… Came together tonight to watch the show about the little blonde girl from the hometown bakery. I am still crying... good tears! Yeah!!!”

Leslie Srodek-Johnson, ’01, a Kent State University journalism graduate, mother of two and lead decorator and baker at Stan’s Northfield Bakery, received the call of a lifetime in December 2018. It was from the Food Network asking her to be a part of the “Christmas Cookie Challenge.”

“My Mom answered the phone, and I heard her say ‘Yeah, it’s the (bleeping) Food Network,’ assuming it was some kind of scam,” said Leslie, laughing. “I quickly told her to give me the phone.” 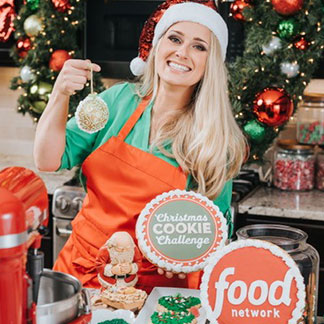 Leslie has worked in her family’s Northeast Ohio bakery since she was in the fifth grade. Leslie said, laughing, she started out “cleaning, sweeping floors and decorating cookies poorly.” Over 30 year later and Leslie has created thousands of masterpieces from 3-D dinosaur and unicorn birthday cakes to butterfly cookies and so much more.

“The business was started in 1961 by my paternal grandfather, Stanley, and his wife Helen,” Leslie explained. “Stanley was a former Hough Bakery employee. He started baking after World War II and later decided to open his own business. My father, David, started working in the bakery full time in 1968, upon returning from Vietnam. My mom, Kathie, began working here in 1973 – and after a long time working together, my parents ‘hit it off.’” Leslie still works with her mom every day.

Leslie managed to work at the bakery while attending Kent State, often arranging her schedule so she could drive back to work at the bakery. Between the baking and decorating, Leslie spent a lot of time with TV2. “One of my favorite memories is co-hosting TV2’s “Desperate for a Date,” a dating show that aired from 1999-2001, with Jason Herron, ’00, and Mike Polk, ’01,” Leslie says.

Her hard work is paying off as Leslie is switching roles from host to contestant on a national television network.

“I was super honored and 100 percent terrified,” Leslie confessed. “Because it’s a lot of pressure to be on a national stage representing 58 years of your family’s legacy. I really didn’t want to let my family down. I was so nervous, I think I lost ten pounds. They offered you all kinds of food, and I couldn’t eat it. It was nerve-wracking. It was harder than childbirth with no drugs!”

Every episode of the “Christmas Cookie Challenge” features five contestants. All five participate in a similar challenge in the first round. Two people get eliminated in round one, the three remaining do another challenge – and then one winner is selected. The winner receives $10,000.

So, snuggle up in Christmas pajamas with your favorite Christmas cookies and cheer on a fellow Golden Flash during the episode of “Bright Lights, Big Cookies” on Dec. 16 at 10 p.m. It will also be repeated Dec. 17 at 1 a.m., and Dec. 22 at 5 p.m. We wish Leslie the best of luck!