Our Story
We met our freshman year living in the Small Group halls. We were both taking bowling, but her class was right before mine. When we crossed paths in between classes, she always told me what to expect. We then became the best of friends throughout our undergrad. It wasn’t until her first year of grad school, and my last year here as a student, we started to date.

The Proposal
Jacquie and I drove to Small Group surveying the remains of our beloved freshmen dorms. Being the determined guy I am, I found my way into the small group area while Jacquie was my watch woman. While she was distracted, I wrote on a brick I picked up, "Will You Marry Me?" When I caught up to Jacquie near the spot where our friendship first started, I told her to look at this brick. Of course, I handed it to her showing the side with no writing on it. She gave me an “ok, it’s a brick, I'm freezing, and I think you just broke the law; I don’t like that" look. I told her to flip it over. As she read those four words, her eyes started to tear up. At that moment I dropped down to one knee in the snow and asked her hand in marriage. With a tearful "yes" and a couple of kisses, we were the two happiest people on that campus.

Staying Connected to Kent State Today
We are proud members of the Kent State Alumni Association. We help out when we can by volunteering for events throughout the year. We are also season ticket holders for football, and have been for the last three years.  We haven’t missed a game yet! 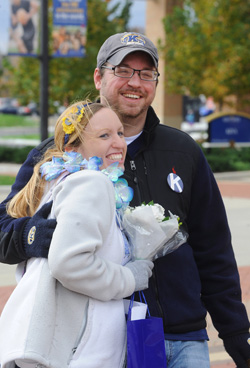