Our Story
Conni and I met at KSU, ironically enough, in a class called Marriage, Family, and Other Intimate Lifestyles (or something close to that). We were introduced by a mutual friend in the class. The introduction was followed by many long, slow walks back to Glen Morris apartments, where we both lived at the time. Our first date was approximately a week later, as we went to the theater to see the brand new box office release of "Aladdin." (It was her choice—I really wanted to see Malcolm X!)

The Proposal and Marriage
We were married in June of 1994, approximately a year and a half after meeting. We went on a spring break trip to Florida to visit my grandmother. Isn't it every girl's dream to be proposed to while visiting a grandmother?? Nineteen years and five children later, and we are still going strong.

Staying Connected to Kent State Today
I am a lifetime member of the alumni association, and my closet/drawers are full of Kent State clothing. We make it back to campus, which is about three hours away, to see baseball, football, volleyball, and soccer games. One of our daughters is a soccer player and will be playing in a tournament at Kent State in March with her team. She hopes to be a member of the Kent State soccer team one day! 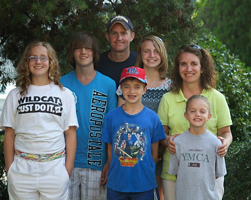