The legendary meteorologist and Kent State graduate passed away on Aug. 4. Goddard graduated with a Bachelor of Fine Arts degree.

**The below article is from the Winter 2011 Issue of the Kent State Magazine.

Dick Goddard, '60 says the number one reason for working as a meteorologist is that he can “infuriate people in 25 counties in 3 minutes.”

Goddard, Chief Meteorologist at WJW Fox 8 in Cleveland, will celebrate his 50th anniversary as a meteorologist in May. Homecoming 2010 was another 50 year milestone for Goddard, who attended the Golden Order luncheon, honoring the Class of 1960. “I can’t pinpoint one thing that I enjoyed most [about homecoming],” Goddard says. “I liked the black squirrels and I was happy to meet a lot of different people and see some of my classmates.” 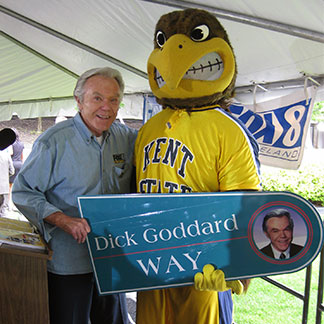 He was also very surprised at how much the campus has grown.

“I haven’t been back to Kent in a number of years and it was shocking, in a way, compared to what it was. There were only 15,000 students when I attended and now there are over 40,000.” Goddard says. “I got lost and I needed a GPS on campus. People had to tell the weatherman where to go. We always get told where to go.”

Goddard, who graduated with a Bachelor of Fine Arts degree, had ambitions of becoming a cartoonist and passed up a job at Walt Disney studios to take a career in television. He started working at Cleveland’s KYW-TV for a few years and then signed a 13-week contract with WJW-TV that turned into 50 years. Today he is known as one of the most popular weathermen in Cleveland.

Goddard came to Kent State after discovering the success of the Department of Art. He knew they had a great reputation and had much respect for the work of Elmer Novotny who was head of the department.

If you knew Dick Goddard in college, you might have thought he would be a performer on Broadway. As a student, Goddard participated in many musicals including Oklahoma, Annie Get Your Gun, Damn Yankees and many others.

“I loved to sing.” Goddard says. “In Oklahoma I was the guy picked to hit the high note at the end of it.”

When he was not performing or busy with classes, Goddard worked the night shift for the National Weather Service at the Akron-Canton Regional Airport. The job brought Goddard to his first position at WJW-TV.

After he graduated,  Goddard sang many times for the Cleveland Pops Orchestra.. In addition to singing, Goddard loves animals and enjoys promoting animal welfare during his forecasts.

According to a general survey that Goddard conducted about favorite seasons, 8 percent of viewers like winter, which he considers a bit high. For those looking to escape the snow, Goddard has good news.

“In June, July and August we [for those living in Northeast Ohio] get more sunshine here than in San Diego, Honolulu, Miami,” Goddard says.

So whether it is snow or sunshine in the Cleveland area, Goddard always manages to make someone happy with his forecasts.