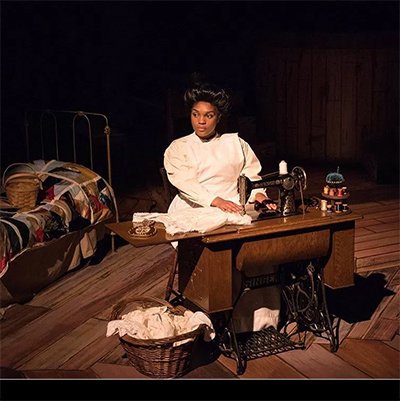 "It is important to never lose track of where you come from or the things that make you who you are. I believe in helping create a safe place for self expression and self love through verbal and physical means."

After choosing Kent State to be her four-year home, Chantrell Lewis became very involved with the theatre program, not only as a student, but also working her way up to become a prolific actress within the program.

Her love of storytelling has helped her reach new heights with the theatre program. This past spring, she played Hedda Gabler, a 125-year-old role that has been seldom played by an actress of color, in Isben's Hedda Gabler. "I am thankful to create history here at KSU as one of the first women of color to play such an important role in classical theatre," Ms. Lewis says.

She further represents Kent State's pride and tradition through her leadership and involvement in campus activities, organizations and community service. She serves as the president of the Black Theatre Association, is a member of the National Honor Society, Alpha Psi Omega National Theatre Honorary, the Pan-African Theatre Ensemble, Sister Circle and Kent State's spoken word poetry team.

Not only is she a talented actress, she is committed to helping others. Ms. Lewis is very proud of her work with the students at the King-Kennedy Center in Ravenna where she helped students learn and develop.
She hopes she will be able to take her education and experiences to make an impact in the theatre community, especially for people who might feel ostracized in other aspects of their life.