The Letter and a Greek Tragedy

Our Story
One night in early November, 1965, I decided to join my Clark Hall roommates in the student activities area of Eastway. There they were talking to three girls, one of whom impressed me. Fortune had it that a couple of days later one of my roommates and I encountered her and another girl outside Olson Hall. I casually mentioned that I never received any mail. Within a day or two, I received a letter from her in my mailbox. I thought that she was either nuts or wanted to be friends. So I went down to Allen Hall and asked her out and she accepted. Our first date? A production of "Oedipus Rex" at Music and Speech! What a way to start a lifetime of joy!

The Proposal and Marriage
The proposal: I was on my knees at a bench (long since removed for more parking spaces) by the Music and Speech parking lot. The marriage: we eloped to Las Vegas in Dec. 68 when she came out to Phoenix, where I was in the Air Force, to interview for teaching jobs. The "official" wedding came on June 14, 1969 in Cincinnati.

Staying Connected to Kent State Today
We are lifetime members who receive alumni e-mails and publications. We missed out on the goDaddy.com Bowl, but plan to venture down to Mobile in October when the Flashes visit South Alabama. 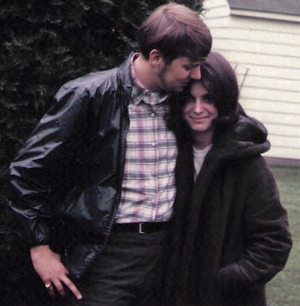