I was moving into Tri Towers in August 1987 for Freshman week and my first year at Kent. My major was Flight Technology. I was in my room putting things away when my mom came up with more items and along with her was Scott, a Junior Flight Technology major and brand new Flight Instructor, helping to bring some of my items. He was a KIC Greeter helping people move in. It was at this time that we discovered that we were both Flight majors. And would subsequently discover that he was also going to be the instructor of my University Orientation class! We started going out about a month later and dated all through my 4 years at Kent. He graduated a year and a half ahead of me but he stayed on as a flight instructor until his airline job became available. I graduated in May of 1991 and stayed on as a Flight Instructor as well. We became engaged during Spring Break of my senior year. Scott’s first airline job came in the summer of 1992 right in the middle of us planning an October 1992 wedding.

Scott and I were flying on United Airlines out of Akron-Canton Airport to Chicago O’ Hare over Spring Break of 1991. Being a pilot he always liked to stop in the cockpit to say hi to the crew. I walked back to our seats and he came along a few minutes later. We take off and after a short while the flight attendant came back to us to offer a blanket and magazines. I had declined both and then she said “how about this?”. She presented me with a ring box with a diamond in it and then Scott asked me to marry him! I was completely surprised! Of course I said yes! We didn’t set a date right away hoping he would get his airline job lined up first, but the airline industry wasn’t hiring a whole lot at the time so we decided to set Oct. 10th 1992 as a date. So, of course he got the call June of 1992 to start training for Mesaba Airlines (Northwest Airlink) out of Detroit. Training would be in Minneapolis for about 2 months. Our wedding was in the Pittsburgh area as that is where I am from. So now the wedding date is approaching and we were living in Cuyahoga Falls but Scott is in Minneapolis for training. The joke was whether the bride and groom were going to make it to the wedding! During this time I was also looking for a place for us to live in the Southeast Michigan area. Needless to say we both made it to Pittsburgh for the wedding. Scott literally finished training during the week before the wedding! There was no honeymoon for us though due to him having to be back in Detroit by the Monday after our wedding. The rest is history! We will be married 29 years in October of this year. We had our son, Kyle, in 1997 and he is now an alumni of the flight program at Kent State (2019 grad) as well and is a full time Flight Instructor. Our daughter was born in 2000 and is a Sophomore Education Major and softball pitcher at a school in Indiana. After 15 years at Mesaba Scott went on to Southwest Airlines where he has been for 14 years and is a Captain. I made the decision to be a Stay At Home Mom.

How Heidi and Scott Remain Connected to Kent State 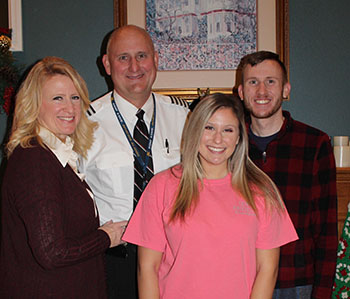