A Special Moment at the Brain on Campus

Our Story
Jason and I were dating before I went to college. I decided to go to Kent State because of the amazing architecture program, and because he was already attending. During our attendance we were a huge part of the men’s basketball and football games. We went to every game we could, rain or shine, homework/exams or not!

The Proposal
After the basketball game, Kent State vs. Akron, on Sunday, March 8, 2009, Jason asked me to come to the brain statue. There he wrote with chalk on the sculptured library wall, “Will you marry me?” and he proposed with a ring!

Staying Connected to Kent State Today
We still attend games at Kent State, and we even took our daughter to a basketball game when she was less than one month old. Kent State was such an important part of our history that we will never be anything other than devoted Kent State fans! 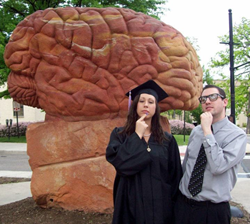