Our Story
We met in the autumn of 1965 at a FIJI gathering. It was love at first sight, or "the thunderbolt" as it’s known. Although, I am still amazed I fell for a young man from a very small town.

The Proposal and Marriage
Jerry and I drove to Erie to get my father's "permission" to marry. Of course, my father informed Jerry how lucky he was to be the chosen one. Jerry proposed at the Reservoir near Kent. We were married in Erie, PA, on March 23, 1968, during a severe winter blizzard. We are celebrating our 45th wedding anniversary this year.

Staying Connected to Kent State Today
We are both members of the alumni association and read its regular publications. Being a member of Phi Gamma Delta Fraternity, Jerry keeps in contact through its publications and with the Brothers, by phone and email. We enjoyed a great FIJI reunion in Chicago several years back. I keep in contact through email, Facebook, and LinkedIn. Recently, we had such a great afternoon at the KSU MAC Football Championship Pre-Game Luncheon, sponsored by the KSU Alumni Association, and the MAC Football Championship Game in Detroit. Everyone was so proud of the players, coach and Kent State. It was really quite joyous. 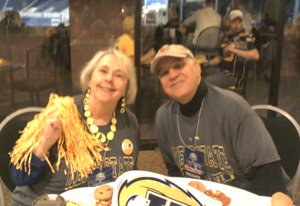