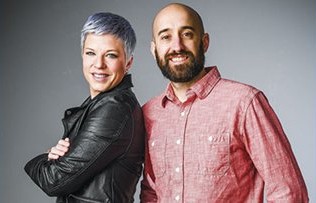 After spending close to 10 years in corporate America, John traded in the shirt and tie for an apron and hair/beard net. In the Fall of 2013, John and his wife Shelley, created Brewnuts, soon to be the country's first donut bar serving craft-beer based donuts. In 2014, Brewnuts was named one of the 10 best donut shops in the United States by USA Today. In 2016, Brewnuts was named one of CNN's "Things to See and Do in 2016". In 2017, John and his wife Shelley were named Cleveland Magazine's most interesting people.

How has your time at Kent State helped with current successes?
My finance background helping out with the behind the scenes aspect of running a business but the connections of Kent State throughout Northeast Ohio has also proven vital in growing Brewnuts.

What do you enjoy most about your career?
I enjoy being my own boss and being a part of the Cleveland community. Like the saying says "I'd rather work 80 hours a week for myself than 40 hours a week for someone else."

What advice do you have for current Kent State students?
As much as education is important, really wrap yourself in the college life and experience. Get involved, go to sporting events, join some clubs.

What is your Favorite Kent State memory?
Definitely the 2002 Kent State basketball team. We went to most of the games throughout the season. Met up with the alumni at Flannery's in downtown Cleveland before MAC Tournament games. A large group of us traveled to Kentucky to watch them reach the Elite Eight. They were amazing!

How do you stay connected to Kent State today?
I try to make it down to Kent a few times a year. Usually to meet up with fellow Flashes for basketball and football games.