John Van Alstine sculpts his way to the Beijing Olympics 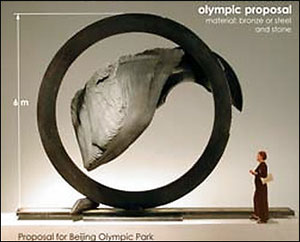 Kent State graduate John Van Alstine, ’74, was one of only 50 people chosen worldwide to display his artwork at this year’s 2008 Beijing Summer Olympics. Van Alstine’s “Rings of Unity — Circles of Inclusion,” constructed from bronze and stone, stands at 15 feet 6 inches as a symbol of the Olympic athlete’s determination.

It seems ironic to Van Alstine that his success in the Olympics came in the form of sculpture.

“I was a championship winter skier and I went to college on a partial skiing scholarship on my way to the Olympics, and here I am, in middle age and I got to the Olympics as a sculptor,” he says.

Van Alstine created “Rings of Unity — Circles of Inclusion” as an extension of his previous sculptural series, “Sisyphean Circles,” which is based on the journey of the Greek mythological character Sisyphus who is forced to push a large stone up a hill only to be defeated by the rolling of the stone back down the hill.

The single ring formation of the sculpture was created to represent the five Olympic rings of different color that signify the uniting of the five participating countries. The sculpture serves as a self-portrait for Van Alstine signifying his pushing to a creative peak, “finishing a sculpture or project and starting all over again.” The three-year project only took one month to assemble once construction began in Beijing.

“Halem was in charge of glass blowing. He was a dynamic and charismatic person, artist and professor, and it was him being in the studio working with the students and his enthusiasm and optimism that got us thinking we could go out and be artists,” says Van Alstine.

After attending Kent, Van Alstine moved on to attend Cornell University to complete his master’s degree in fine arts in 1976. Van Alstine became a faculty member at the University of Wyoming and he then taught drawing and sculpture at the University of Maryland. In 1986, he left teaching to move back to his hometown in the Adirondack Mountains of New York to pursue his passion for studio work.

Aside from his Olympic success, Van Alstine is proud of his recent work for the new Indianapolis Airport. “The piece is not only large in scale, but really successful for the site in terms of its integration conceptually and the way the ideas fit together,” he said. His sculpture, “Cardinalis,” pays tribute to the Wright Brothers and those men and women who make air travel possible.

Van Alstine’s work can be seen across the United States, as well as in Europe and Asia. He has successfully accomplished more than 45 solo exhibitions and his many large-scale, outdoor site-specific pieces are displayed at museums such as the Smithsonian Institution. He is also the author of Bones of the Earth, Spirit of the Land, a book that recaps the first 25 years of his work.

Outside of sculpting, Van Alstine enjoys his snowy homestead by engaging in activities such as skiing, snowshoeing and kayaking.

Van Alstine, both an accomplished artist and father of two, is excited about the future.

“I want to be able to continue like I have been for the last 20 years. When I look around to some of my colleagues at Kent State, it’s a pretty select few that actually get to live the life I've been living — being an independent artist and calling my own shots,” Van Alstine says. “My goal is to keep doing that. I don’t see things changing. New projects come my way all the time, and I'm delighted to be able to do them.”

If you would like to view some of his art, please visit http://www.johnvanalstine.com/.