Your Story
Oh man, how I met my wife. It was the annual Renaissance Ball at Kent State. The best dress competition was going on at the time. It was the best dressed women and I’m looking on stage and I see this girl, who later became my wife. I didn't have the chance to talk to her though until I ran into Arica Kress, '03, my RA at the time, who was driving Maria home. They offered me a ride and that was the first chance I had to speak to this girl who became my wife. We went on a date and eight months later we got married.

The Proposal and Marriage
I proposed to her at my cousin’s wedding. I had to first ask my cousin if it was ok because I didn’t want to ruin her special day. So she thought it was just the greatest idea to propose to my wife. So I put my wife on the spot and as soon as I came to her, she knew what I was doing. I got down on my knee and she just couldn’t believe it and was in tears. Once I proposed to her it was less than a month later we were married. The mayor of Kent married us and we got married on a pier, which we had ran past every day together because we used to work out together.

How do you and your spouse stay connected to Kent State as alumni?
My wife and I stay connected by going back to Kent as much as possible. Homecoming, basketball games and doing events in Kent. During the Browns games I go to Water Street Tavern. I try to introduce myself and to give my services if needed to the president to make it easier to connect with not just the community but the students at Kent. I try to lend my services wherever it’s needed, whether it is for a homecoming game appearance or camps. 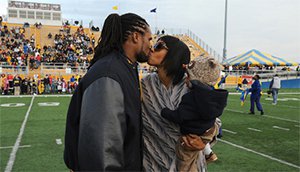