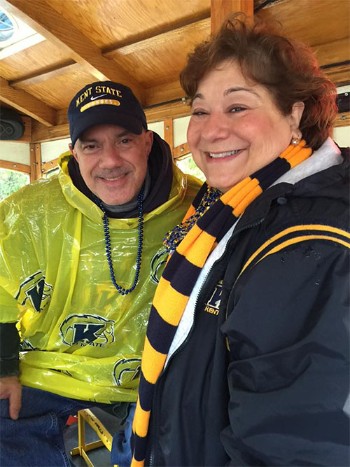 “I have always felt it was important to pay back Kent State by being actively involved in the alumni program, creating a scholarship and supporting the university and its students.”

Elizabeth Bartz says Kent State is the foundation of who she is today and one of the reasons why she stays so connected to the university. Bartz served on Kent State University’s National Alumni Association Board as its Vice President, the Community Advisory Council for WKSU and serves on the Journalism Professional Advisory Board. She is also involved with Kent State’s Washington Program in National Issues, a semester program for undergraduates in Washington, D.C.

Currently, Bartz is founder, president, and CEO of State and Federal Communications, Inc. The company provides government compliance information and consulting to Fortune 500 companies, many trade and professional associations, legal and accounting firms, and corporate and contract lobbyists in all 50 states and Canada. In 2010, State and Federal Communications received the Excellence in Business Award from the Greater Akron Chamber and has received the Weatherhead 100 Northeast Ohio's Fastest Growing Companies award 2010 and 2013.

Bartz is very active in various professional societies and community and volunteer efforts, sharing her time, talent and resources. Her government affairs leadership positions include the State Government Affairs Council Executive Committee (SGAC). She is also a Gold Foundation member of the National Conference of State Legislatures (NCSL), associate member of the Council of State Governments (CSG) and serves on many other government boards.

Bartz received many awards including the 2007 Woman Philanthropist of the Year from the Summit County United Way, the 2008 Leadership Award from the Washington (DC) Area State Relations Group and the Top 100 Women-Owned Business Owners in Ohio from Diversity Business since 2007.