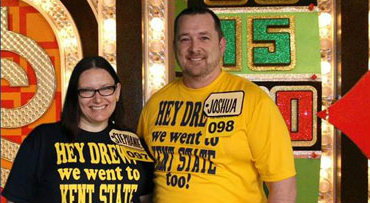 Stephanie Oehler ’99, was lucky enough to hear the words, “Come on Down!” on the Price is Right.

Oehler attended the Price is Right, which aired on Feb. 16, with her husband Josh Oehler, who she met at Kent State on the first day of freshman year. The couple made Kent State T-shirts, reading “Hey Drew, we went to Kent State, too.”

“We knew we needed to have good energy and show excitement about the game to get called down so making T-shirts was one way to show our enthusiasm,” Oehler says.

The T-shirts must have worked because Oehler was called down to “contestant row.”

When her name was called she couldn’t believe it.  “It was really hard to understand because it was so loud in there but I saw the cue cards and knew it was me being called.”

Once called down to the contestant row Oehler bid $1600 on the first item up for bid, which was a 55” LED flat screen TV.  The retail price was $1800 and Oehler won her way on stage to play a pricing game.

She ended up winning the Race Game in near record time and won an ATV, Tory Burch accessories, a gas grill and a laptop and printer.  She also made it to the Showcase Showdown and although she did not win in the Showcase (she underbid on a trip to Germany), she still had a great time.

Meeting fellow alumnus Drew Carey, who is the host of the Price is Right, was one of the highlights.

“It was great to have that Ohio connection with him. There was a lot of Kent State love and he [Drew Carey] was really funny.” Oehler says. “He brought up Kent State to the audience. You can tell he is proud of his years there.”

Oehler also beams with pride for Kent State. “I owe Kent State so much. I loved the people, campus and advisers. I always give KSU a lot of credit.”

“I became an area rep for the Kent State alumni of Arizona because I appreciate all of the ways KSU helped prepare me for lifelong success. Staying connected with other people who feel the same way is rewarding and feels a lot like being ‘home,’" Oehler says.