Singing the National Anthem in a packed stadium is nothing new for Jon Ridinger, ’08, M.A. ’09.

Ridinger sang at the first game of the American League Division Series at Progressive Field for the Cleveland Indians against the Boston Red Sox on Oct. 6.

“Performing in front of a packed house was absolutely exhilarating,” Ridinger says. “Being at Progressive Field when it was not only full but full of emotion was something else.”

A Kent native, Ridinger received his Bachelor of Arts in Music in 2008 and his Master of Arts in Teaching in 2009. In addition to singing he is also a substitute teacher and works in guest services for the Cleveland Browns. 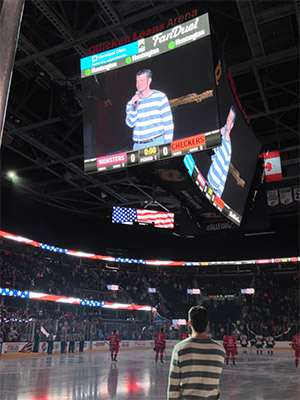 He is grateful for his education from Kent State because it gave him so many opportunities to improve and perform.

“My education at Kent State helped me prepare by giving me excellent vocal training and lots of experience,” Ridinger says.

His major league anthem debut at Progressive Field was in 2001. He sent the Indians a recording of a previous performance and was asked a month later to sing at a game.

“My first game was April 5, 2011, a 38-degree night game against the Red Sox,” Ridinger says. “At the time it was the second smallest crowd in Progressive Field history—around 8,800 people.”

Ridinger has been asked back to perform many times since 2011. Earlier in the 2016 season, Ridinger opened the July 8 game against the New York Yankees and again on Aug. 19 against the Toronto Blue Jays where he sang both the United States anthem and the Canadian anthem.

Along with the Indians, Ridinger has also performed the National Anthem for other professional and minor league sports teams including the Akron RubberDucks and the Cleveland Monsters.

When Ridinger sings the Star Spangled Banner, he feels a deeper sense of patriotism and tries to perform the difficult song to the best of his ability.

“I always have to be on top of my game for any anthem performance, whether it's the Major League Baseball playoffs or a charity football game,” Ridinger says. “The Star-Spangled Banner can be challenging song for a lot of people to sing because it has a fairly large range of notes, but that’s what makes it fun to sing for me.”