When Chantel Owens, ’17, first stepped foot on Kent State’s campus she was only 16 years old.

“I didn’t even know at the time that I was the only 16-year-old on campus when I first came here in 2014,” Owens says. “The Chesnut Burr actually called me to feature me in a story because of it.”

Owens, who is now only 19, graduated with her bachelor’s degree in public health and proudly received her degree on May 13. She is one of the youngest Kent State students to graduate in three years.

“I don’t really want to leave but then again I think why not be young and go out and do more,” Owens said.

Owens attended John Hay Early College High School and was a part of High Tech Academy where she took classes at Tri-C, earning high school college credits at that same time. When she came to Kent State she had 45 credit hours. 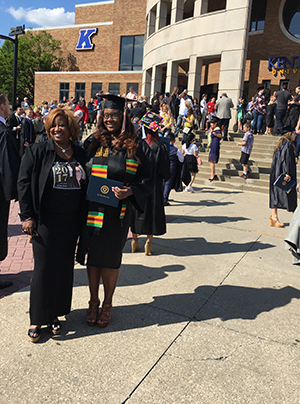 While Owens applied to several out-of-state colleges, her mother, Heather Owens, ’94, encouraged her to attend Kent State, her alma mater. “My mom loved Kent State and would always say you have to go there,” Owens says. She really loved it here and instilled it in me forever. It was only right for me to come to Kent State.”

Choosing a field of study was an easy decision for Owens.

“I knew for a fact that I wanted to go into the health field and thought about becoming a doctor. I picked the pre-med track at first but ended up switching because I wasn’t sure about the costs of med school. That’s when I decided on public health with a concentration in health promotion and education.”

Owens lived in Lake Hall as a freshman and then moved to Centennial Hall for her last year.

Although she never was into the party scene, Owens kept herself busy. “I met new people and went to on-campus events especially a lot of Greek Life events because I had friends in a sorority.”

Owens also worked in Prentice Hall as a cashier and at the McDonalds in her hometown of Euclid, Ohio, on breaks. Juggling school, work and her social life was challenging but Owens balanced it all pretty well. “I am used to doing both work and school. It is a lot of planning, preparation and organizing. I get it from my mom who always balanced her work/family.”

Currently, Owens works at Hillcrest Hospital as a nursing assistant but doesn’t want to go down the nursing route in the future. Owens is keeping her options openand plans on pursing a master’s degree in the healthcare field in the fall.

“I am thinking about PA (physician assistant) school or maybe attending NEOMED,” Owens says. “I want to be on top.”

With a positive attitude, Owens definitely has what it takes to be on top. “Just achieve what you believe and if you want something bad fight for it. Anything is possible.” Owens says. “You can do whatever you set your mind to. The sky is the limit.” 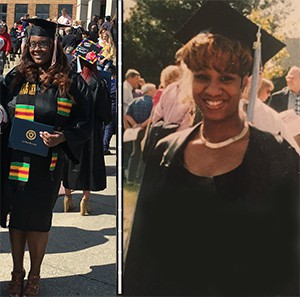