We met through a mutual friend on campus. I was a tour guide and he was a student manager for Prentice Cafe. We started dating in 2007, right before I went to NYC with the fashion school for a semester.

In 2010, we went on a little Vacation to Chicago, where my family is from. He wanted to propose in the Field Museum, but the whole place was crowded. As we were leaving, he knelt in the snow outside and asked me to marry him. We got married in June of 2012.

How Kristen and Nicholas Remain Connected to Kent State

We try and go to every homecoming. He was in marching band and likes to march in the alumni band. Every weekend you will find us in our Kent State gear! 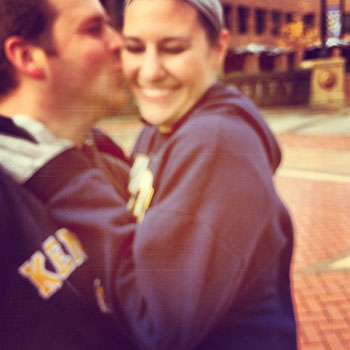