Our Story
Adam played football, and I worked in the football office with my friend Erin. We originally met in Psychology class junior year when he asked Erin whose jacket she was wearing. We started talking and began hanging out. Erin and I watched his dog for him that following month. We didn't even know him well! We continued to talk and hang out. Eventually it turned into us dating! He is from Kentucky, and I'm from Ohio. Once we both graduated, I followed him back home to Lexington, KY, and we have been here ever since! Thanks to Kent State, without which we would have never met, and I most likely wouldn't be living in Kentucky! I never would have thought! 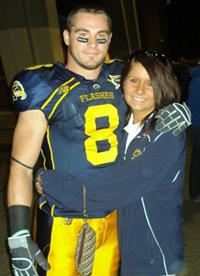