A Lifetime of Love Begins at Leebrick

Our Story
Jim and I met at Kent State in 1986 just a month before he graduated. I was in my sophomore year. We both lived in Leebrick Hall. He was an RA on the third floor, and I lived on the second floor. One night on his "rounds" we began talking. We had our first date on May 3 1986, and we have been together ever since. We will celebrate our 25 anniversary this June. We have four sons— Austin, Evan, Adam and Alex. Adam has been accepted to Kent State next fall as a business major.

The Proposal and Marriage
When Jim graduated from KSU in 1986, he had already accepted a job in Louisville, Kentucky. Since I was only a sophomore, this meant we had a long distance relationship. Jim proposed on Thanksgiving Day, 1987 and we were married just two weeks after I graduated from KSU. On June 18 we will celebrate our 25 anniversary!

Staying Connected to Kent State Today
Kent State graduates are everywhere, so we're always meeting people who attended, have family members who attended, or who have children going to Kent. We have been able to go back and visit several times and are always amazed at the changes....but we also still feel such a sense of familiarity. I'm so happy I found the alumni association’s Facebook page. It makes staying up on the latest KSU news so much easier. 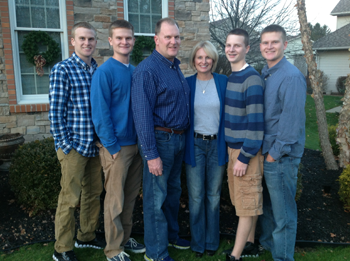