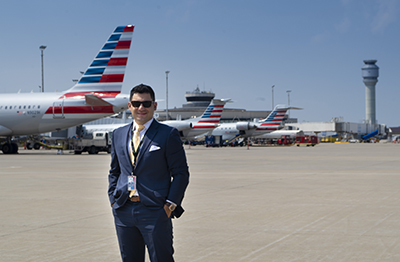 “When you achieve flight, when you lift off the runway, gazing out of the window as everything falls away, the instrument panel ticking and the engine roaring, in that moment nothing else in the world matters. It’s an unparalleled felling. Being in a position to share this moment with others, be it a kid taking his or her first airplane ride or the senior that spent his whole life dreaming of becoming a pilot… this is the single most gratifying reason for our business.”

Mr. Belluardo was determined to be in aviation. In his senior year of high school, he started discovering his purpose and joined an aviation vocational program. That same year, he chose to attend Kent State because of the university’s relationship with local high schools and its Aviation Program.

“Like many students, I came into Kent State with certainty. I thought I knew precisely what I wanted. I was on a war path to become an air traffic controller, but like all students at Kent State, your curriculum exposes you to areas well beyond your focus. It introduces you all areas of the field and opens your eyes to the right opportunity that exists,” Mr. Belluardo says.

In a moment of clarity, which also happened to be in the middle of a difficult air traffic control simulation, Mr. Belluardo realized that being an air traffic controller wasn’t exactly where his heart was. After meeting with his professors, he did a turn towards aviation management and found his purpose, earning his duel bachelor’s degree in Air Traffic Control and Aviation Management.

Today, Mr. Belluardo is the Planning Manager for Cleveland Hopkins International Airport. He has overseen multiple capital improvement projects and strategic planning initiatives. On top of the rewarding work he does at the airport his most rewarding service experience is being able to contribute to the Young Eagles Program, which provides free airplane rides and education for children and teens age 9 to 17.

In addition to his job, he partnered with Bryon Palitto and Jason Lorenzon to form two companies, AeroTrek Flight Academy and Flight Services of Wadsworth. Nick and his partners employ twenty personnel and conduct flight training, airport management services and aircraft maintenance.

Prior to his current role, Mr. Belluardo served as the Airport Director for the Jefferson County Regional Airport Authority and Airport Manager at Wadsworth Municipal Airport.

In 2017, Mr. Belluardo was recognized by his peers in the Airport Business Top 40 under 40 which showcases industries top talent and leaders.

When he isn’t busy doing what he loves at work, Nick also is an avid tournament angler, fishing in more than 20 bass tournaments a year. He also enjoys mountaineering, flying, kayaking and working at the local ski shop.