A Passion for Gymnastics and Teaching - Alumna Finds Success Coaching

As a child, Joan Ganim, ’69, dreamed of opening her own dance studio. When she came to Kent State that dream soon changed when she discovered a love for gymnastics.

“I never tried gymnastics until I attended Kent State,” Ganim says. “I just joined the team as a way to get involved and meet people but I developed a love for the sport.” 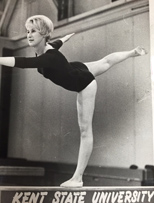 When Ganim joined the gymnastics team in 1965, it was a recreational team coached by Janet and Rudy Bachna. “The Bachnas got a lot of girls and boys to come to Kent that were good at gymnastics in high school," Ganim says. "They coached two Olympians back then, Betty Maycock, '64, and Marie Walters.”

Ganim says joining a sports team in college was like being a part of a family. “Being part of a team was like having a bunch of brothers and sisters,” Ganim says. “It was challenging, but fun.”

After graduating from Kent State, Ganim went on to teach health and physical education at Brecksville Junior High and started coaching the Brecksville Gymnastics Club, which included boys and girls from all levels. "Getting a teaching degree at Kent State is what landed me the job in the public school system," Ganim says.

In 1975, Ganim started Gymnastics World with her husband, Ron Ganim, '68,  (who is also a Kent State grad). Since then the club has won 15 state championships and over 20 of the students in the program have gone on to compete at Kent.

“All the experiences I received while at Kent State and during my early years of public school teaching has given me and my husband the ability to keep our business going for 41 years,” Ganim said.  “Our philosophy at Gymnastics World has always been ‘to teach the child, not the sport.’  We want children to be winners, but it is much more important to teach them life skills through the sport of gymnastics like dedication, commitment, discipline, time management, goal setting etc.”

Ganim says some of her favorite Kent State memories were spent traveling with her teammates. The team had between six and ten matches a year competing with Ohio State University, Bowling Green University and many others. Ganim recalls the meet against Centenary College in Louisiana being the ‘big meet of the year’ because they were one of the best teams.

Ganim with her teammates (second row, 4th from the left). 1968 Chestnut Burr
“My favorite trip was the one to Louisiana,” Ganim says. “I wasn’t the number one competitor on the team. There were athletes better than me but I still loved traveling with the team and competing together. I also was excited because I got to travel by plane.”

During her summer breaks, Ganim and her husband taught gymnastics camps. “We would go to local high schools in the Kent area during the summer for a week and teach kids how to tumble,” Ganim says. “Teaching is always something I enjoyed doing.”

Currently Ganim is the head coach at Brecksville-Braodview Heights High School and was awarded the 2014 Gymnastics Coach of the Year.

Some advice Ganim said she would give student athletes who want to pursue a career in sports is to never give up on your dreams. “Every day is a challenge, but make sure you are enjoying every minute of it."
By Zabrina Hvostal