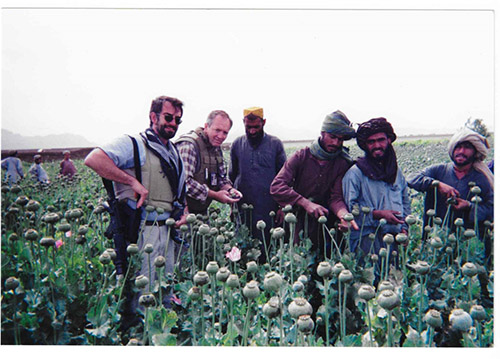 Subject Matter Expert in Counter-narcotics, Department of the Army

"I teach military officers the role of law enforcement officers in war zones and how inter-agency cooperation is vital to our overall mission(s). My work, the exchange of real-time information, mutual cooperation and understanding the role of agencies at the international level is so vital in protecting our country from a host of dangers that now more than ever move seamlessly around the world."

Law enforcement has always been a big part of Gary O’Hara’s life. It started in 1970 when he was a freshman at Kent State. “My goal as a young man was to be a policeman and after finding out Kent had a criminal justice program it was just a perfect fit.”

O’Hara’s invaluable experiences as a student set the stage for 40 years of his career as a professional law enforcement officer. Currently, he is a Subject Matter Expert (SME) in counter-narcotics as it relates to international terrorism assigned to the Department of the Army, National Training Center at Fort Irwin, California.

It’s been quite the journey to his current position. Upon graduating, he completed the Ohio Peace Officer program and became a local officer. Shortly after, he worked as an agent with the Ohio Office of the Attorney General, Bureau of Criminal Investigation, dedicating his time in an undercover capacity assigned to federal task forces to dismantle organized crime groups in the Cleveland area.

From 1980 – 2000, O’Hara worked in various law enforcement roles for the U.S. Department of Justice (DOJ), Drug Enforcement Administration (DEA), in Chicago, Boston, Philadelphia and New York City. These experiences lead to a promotion as Section Chief for DEA’s Foreign – Deployed Advisory Support Team to combat nacro-terrorism in Afghanistan. In addition, he served as a case agent on international drug cases in Russia, Italy, Germany, Columbia, Mexico, Tajikistan and many other places.  In 2006, O’Hara retired from the DEA and spent the remainder of his career in various roles including a Senior Police Advisor for the U.S. Embassy in Kabul.

O’Hara has received many awards for his hard work and dedication to the field including the Medal of Valor from the DOJ/DEA for a police related shooting in Philadelphia. He is now sharing his passion in law enforcement and teaching on the issue of transnational organized crime, narcotics trafficking and the need for ongoing training to all law enforcement officers.

Not only does O’Hara credit Kent State for the invaluable education and experiences he received but for finding his wife, Blanche O’Hara, ’74, who graduated from the School of Nursing. They currently reside in Rocky River, Ohio and enjoy spending time with their four children (one Kent State grad) and four grandchildren.