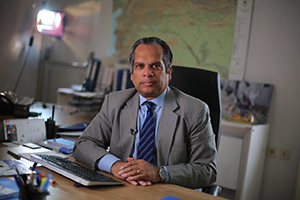 “I see things from people’s perspectives. You understand what they want and respond to their needs. You want them to restore their dignity. You restore their dignity by helping them pick up their lives so they can support themselves and their families.”
With life-long ambitions of working for the United Nations (UN), Mr. Rajasingham majored in developmental economics at Kent State. It wasn’t until several years after graduating and a few stints in banking and with the hotel industry that he landed his dream job with the UN.

“The Soviets had just left Afghanistan and at that point no one wanted to go there,” Mr. Rajasingham said. “I had previously taught English to Afghan refugees and got a job there. That was the best decision I made career-wise. It really took me to the deep end, as there was a major crisis there. That took me down the path to the humanitarian work I do now.”

With more than 25 years of experience in humanitarian affairs with the United Nations (UN) and the United Nations Children's Fund (UNICEF), Mr. Rajasingham has served in some of the most crisis-affected operations in the field and at the UN headquarters. With a proven record of humanitarian coordination and advocacy, Mr. Rajasingham has extensive leadership and inter-agency coordination experience that covers field support, inter-agency and donor coordination, humanitarian financing, accompanied by in-depth technical and strategic knowledge of the Office for Coordination of Humanitarian Affairs (OCHA's) added value and operation on advocacy, policy, planning and financing.

Mr. Rajasingham is currently responsible for coordinating the Cross-Border Humanitarian Assistance from Turkey for vulnerable populations inside Syria. The operation includes agencies of the United Nations and more than 200 international, Syrian and Turkish NGOs. He has previously served in crisis countries such as Afghanistan, Bosnia, Herzegovina, Occupied Palestinian Territory and Sudan as well as at the headquarters of the United Nations. He has worked in conflict and post- conflict countries in coordinated relief programs, as well as programming for durable solutions for internally displaced people.

Mr. Rajasingham credits his Kent State experiences for his successful career. “Kent State was one of the best decisions I could have made. Kent State allowed me, in the humanitarian context, to look at the bigger picture, the long term impact of what you are doing. It helped me see things from the people's perspective and respond to their needs. The professors and people I met at Kent State taught me a sense of community. And I really appreciated that the professors took education beyond the classroom."

He is proud to be married to Yasmine, and father of Amira and Raoul.