A Quilt of Golden Flash Memories

From making her mark on campus during Destination Kent State to joining the recreational skate team, Marissa Belock, a sophomore biology major, has already created so many amazing memories during her college career.

Thanks to her mother and Kent State alumna, Lori Belock, ’86, these memories are now wrapped up in a beautiful quilt of blue and gold T-shirts. 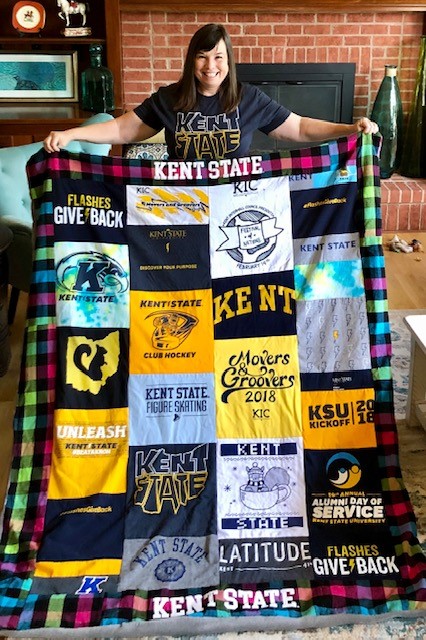 “I first saw a post on social media about a T-shirt quilt. I thought, ‘I can do that!’” Lori said. “This is my sixth T-shirt quilt and I get better every time.”

Lori included one of her daughter’s favorite Kent State T-shirts from freshmen orientation. “It has the most meaning as it represented an official flying out of the nest,” Lori said.

Not only are Marissa’s favorite T-shirts sewed into the quilt but Lori also included some of her T-shirts she received at Kent State Alumni events.

“My family and I have volunteered during Alumni Day of Service with the Central Ohio Alumni Chapter for the last three years (Homeless Families Foundations and the Central Ohio Food Bank). Even though my husband is a Buckeye, we make it a family affair,” she said.

Lori began sewing when she was only nine years old.

“I learned how to sew when I was a member of 4-H in Ashtabula, Ohio,” Lori said. “I credit my very grounded Ashtabula upbringing and KSU education to my adventures around the country and volunteering. I love Ashtabula and its history as much as I love Kent’s history. Quilting is my way of preserving history.”

Lori wished she would have kept her T-shirts from her Kent State days, but she still holds on to many amazing memories she had as a student.

“My favorite memories include the Robin Hood, Rays, Halloween, Korb Hall and Glen Morris apartments (now Eagles Landing). Fun times! This was an important part of growing up and being on my own.”

In addition to these memories, Lori remembers the beautiful campus.

“I had a favorite walk on campus to White Hall. I always had this Zen-like, calming feeling every time I walked along the curvy path and huge trees that must have been there for 100 years, with flowers and black squirrels running amuck.”
Lori still shows her love for Kent State by proudly wearing her Kent State gear.

“We saved enough Kent paraphernalia to wear at all the national parks we visit. Some are just too precious to cut up for a quilt,” Lori said. “It’s fun to reminisce with other Flashes at our national treasures.”