An October Afternoon in the Park

Our Story
We met our sophomore year while both living in Fletcher Hall and began dating later that year. There is some debate between the two of us as to when exactly the first time was that we met. Discrepancies aside, we met in the dorms!

The Proposal and Marriage
We were engaged during our senior year at a park near the city of Kent. We had visited this park frequently during our time in college; down one path there was a tiny waterfall with a big rock nearby to sit on, and this was "our park." On one October afternoon, we went to that park as normal and Brian proposed– I happily said, "Yes!

Staying Connected to Kent State Today
Brian and I make it a point to attend at least one KSU football game each year. We plan this trip with a walk around the university, and we visit the places that are special to us. 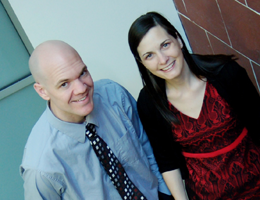