An Anti-Valentine’s Day Set Up

Our Story
Spring semester 1991, I was an officer in the KSU Amnesty International chapter, as was Steve's roommate, Bill. I shared an office in the Union with the International Film Club, and we all became friends. For Valentine's Day, we planned an "Anti-Valentine’s Day" dinner in the Rathskellar, but secretly we were trying to set some people up. I hadn't met Steve yet, only his roommate. Once that night came, the only two people who didn't have a match up were Steve and I. So, we sat and talked. He walked me back to Engelman, even though he lived in Lake which we came to first. Our friends waited a few months to let us know we had been a set up (blind date) too! They told us that they thought if we had known it was a blind date, neither of us would have attended that night – and they were right!

The Proposal and Marriage
We were engaged during my senior year, Christmas 1991, and did the long distance thing while Steve was finishing up his student teaching and I was in grad school in Arizona. We were married in August 1994.

Staying Connected to Kent State Today
Mostly we stay connected through the alumni publications, Facebook, and Nancy Schiappa (who rocks). Anytime we are in the area we like to drive around campus, and if the weather is nice, walk around. 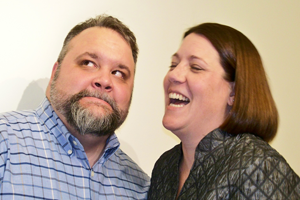