When Mike Fornes, ’75, visited Kent State University as a high school senior he knew he would spend the next four years there. 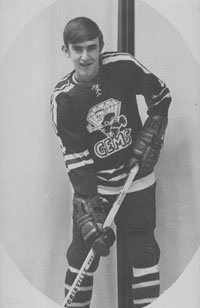 “When I graduated from high school in Dayton, I had no idea where to find the college experience I needed to achieve my goals.” Fornes says. “I’ll never forget walking into the rink [Kent State Ice Arena] for the first time and thinking, ‘this is it; I’m home.’”

Two important people also influenced his decision to attend Kent State. “I got two letters - from a broadcasting student Greg Benedetti, ’72, and Dom Lumley, the hockey [Kent State] coach who encouraged me to visit the school. I knew right away Kent would present an opportunity for me.”

Fornes, who announced for several NHL teams including the Hartford Whalers, Washington Capitals and Dallas Stars, had a head start on his career goals. In high school he announced play-by-play for a high school radio station he started and was also the stickboy for the Dayton Gems.

Fornes as the Dayton Gems stickboy
“As a stickboy I saw firsthand all the jobs involved with a sports team,” Fornes says. “I worked alongside the trainer, sportswriters, public relations director and of course players, coaches and referees. But broadcasting the games appealed to me the most and my high school experience allowed me to hit the ground running at Kent State.”

By his sophomore year of college, Fornes was the play-by-play announcer for the Kent State “Clippers,” the first Kent State club hockey team.

“Some of my favorite memories involved the big crowds we used to get for the hockey games,” Fornes says. “We used to pack that place with people to see the Clippers." The “Clippers” were founded in 1970 by Lumley and Steve Albert, ’72, who is currently play-by-play announcer for the NBA’s Phoenix Suns.

“Meeting Steve Albert was like meeting Dom Lumley, a career-enhancing experience.” Fornes says. “He took me to his home in New York City over Thanksgiving break my freshman year and we saw The Tonight Show, a Rangers game, a Knicks game and a Nets game. I knew what I wanted after Steve showed me what this world was like.”

Not only did Fornes meet several influential people with the Kent State hockey team but he credits several professors who helped him in his career. “Dr. John Miller stood out as an instructor who knew what I wanted to achieve and made his classroom relevant towards my goals. He often heard my work and helped me get better.”

After college, Fornes went on to announce for the Muskegon Mohawks of the International Hockey League.  He then worked his way up through the minor leagues and had the chance to call Wayne Gretzky’s first professional goal with the Indianapolis Racers of the World Hockey Association, one of his career highlights. He also won two Emmy Awards while announcing for the Washington Capitals.

“The biggest rewards were the friends I made and the opportunities the game gave me. I got to coach my own kids and worked 20 years for USA Hockey teaching coaches and referees,” Fornes says.

After finishing more than 1,500 broadcasts, Fornes is now retired and living in a small town on Lake Huron in Michigan. “It is funny how things come full circle. It is pretty clear to me that hockey made all of this possible and helped me get to this point. Kent State University was a very important step on the ladder I climbed.”