The initiation of the Suriname Forest Fragments Project coincided with the 5th annual workshop offered for Surinamese students in the Environmental Sciences or Forestry programs at Anton de Kom University and the Biology program at the Advanced Teachers Training Institute in Paramaribo. We enrolled nine students in the workshop and offered a teaching assistantship to a former workshop student.

There is quite a lot of advanced planning that needs to take place before a workshop begins – preparing lectures, applying formally for a permit to do the research from the Suriname Forest Service (Lands Bosbeheer), purchasing supplies and equipment for the research, identifying suitable fragments in the Wanica District (south of the capital city of Paramaribo) on Google Earth, and securing permission from land owners to walk on their land. Also, arranging international transportation, visas, etc.

Fortunately, our group consists of two colleagues in Suriname who provide essential local preparation and support. Ari Vreedzaam is a former Anthropology MA student of mine from Kent State University and is Suriname’s only trained primatologist. He has started collecting data for his PhD in a joint program with Tulane University and Anton de Kom University, to study the environmental effects of gold mining. Chantal Landburg has a Master of Science degree in Sustainable Management of Natural Resources from Anton de Kom University and conducts rapid environmental assessments prior to the onset of potentially damaging projects in Suriname. They live in Wanica District and personally know several people whose land we will survey. We launched the field portion of the workshop from their home.

My U.S. colleague, Sylvia Atsalis, PhD, is at the University of Chicago where she is the Program Director of Public Policy and Service. In addition to her primatology background (mouse lemurs from Madagascar), she is committed to preparing students to be professionals, in our case, conservation biologists. Our workshops include both field study and lectures. Sylvia added lectures on professional development last year and the students love the addition.

Forest loss and fragmentation in the world’s tropics have a severe impact on biodiversity and are expected to have local, regional and global effects on climate, vegetation and ecosystem services (such as fresh water availability, pollinator performance and seed dispersal). As forests become fragmented, “edge effects” drive further loss by exposing trees to wind effects, create opportunities for forest fires in some tropical areas, and erode fragment boundaries. Forest loss may also result in small and dispersed animal and plant populations in which the risks of hunting and disease increase and the effectiveness of seed dispersers and pollinators decrease. Despite these dire predictions, Laurance et al., 2017 (Biological Reviews) “assert that there is no such thing as an ‘unimportant’ forest fragment.” Even small fragments harbor seed banks of diverse tree species, act as reservoirs for seed dispersing animals, and are capable of expanding in a relatively short period.

While Suriname is fortunate to have much of its interior forest intact, 70% of the country’s population lives in the geologically recent coastal plain, particularly in and around the capital city of Paramaribo. A recent report found that population expansion outside the city is increasing, with rural growth now surpassing urban growth. As the human population of Paramaribo expands by clearing habitat for housing, farming, and agrarian activities, forests in the region are becoming increasingly fragmented, risking loss of biodiversity, threats to endemic species, and (as yet) unknown effects on Suriname’s climate.

Selecting the Fragments for Study

For the workshop, we selected 10 fragments (9 in Wanica District and 1 in Paramaribo), ranging in size from < 1 ha to > 40 ha. We identified small fragments as those < 5ha; medium 5-10 ha; large > 10 ha. [A hectare (ha) is 100 m2, approximately 2 football fields side-by-side.] We are interested in several properties of these fragments in addition to their size. Of course, larger fragments are better than smaller ones, but the potential for connecting fragments is also important as is the proximity to large fragments and the characteristic of edges. More about edges next week.

Back to the Workshop Timeline. . .

The workshop started in the week of major hurricanes in the Caribbean and Gulf of Mexico. Sylvia’s flight out of Chicago was cancelled and she could not rebook it for two days. My flight out of New York City was able to thread its way to Port of Spain, Trinidad and then to Paramaribo. Sylvia finally arrived after enduring a 5:30 am departure from Chicago and three flights, arriving at our apartment 8 hours before the workshop began.

The first two workshop days consisted of lectures at Anton de Kom University and preparation for the field research. We gave lectures ranging from theory and methods of conserving forest fragments in the tropics to why Guiana Shield forests are exceptional to the history of human impact in Suriname and an introduction to environmental law in Suriname. We also introduced the species of monkeys of Suriname and talked about primate ecology. Sylvia began a series of lectures on leadership and professionalism.

On day three, we began a six-day schedule to measure as many fragments as we could. The last two days would be spent on data analysis and project presentations on the last night. 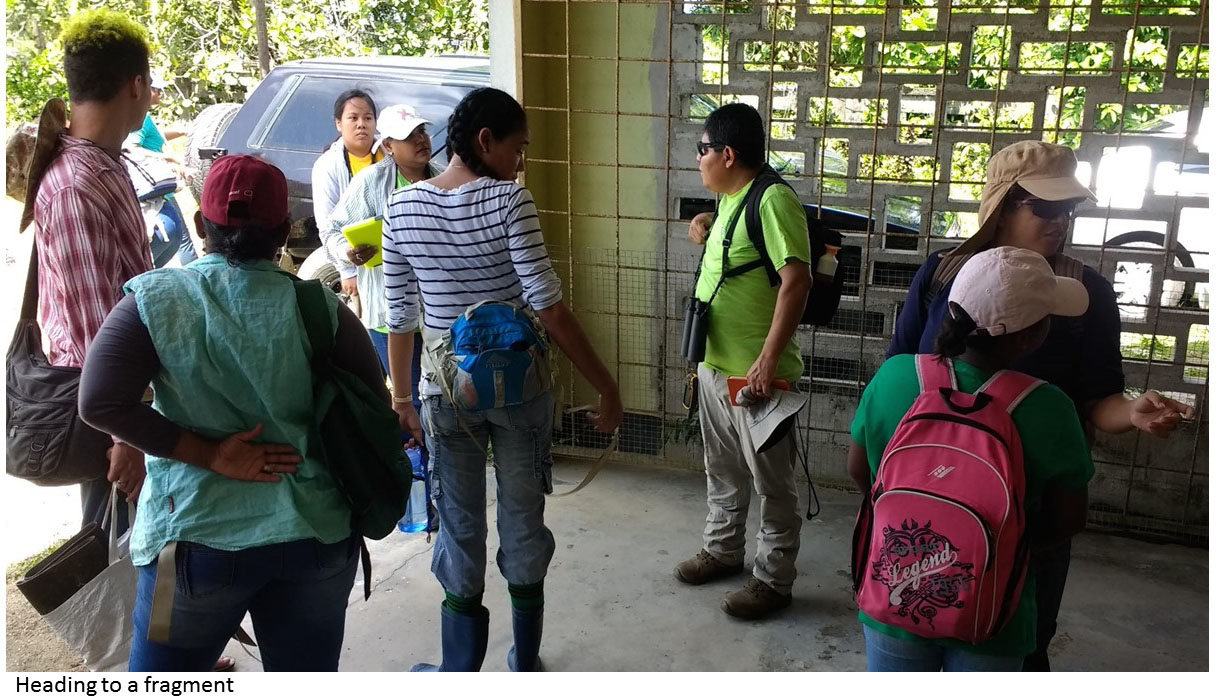 Measuring and Characterizing a Forest Fragment

Certainly the quickest way to measure a fragment is to use the polygon tool on Google Earth and measure perimeter and area. We used that as the starting point for our project, but we wanted to know more specific information and also wanted to estimate the biodiversity in the fragments.

We found out that measuring fragments a) is hard work, b) provides essential new information, and c) is hard work. Fortunately, every student in Suriname that I have encountered has had experience in the field; most can use a machete, a compass and a hand-held GPS. They are resilient, good-natured, innovative and collaborative (i.e., I love working with Surinamese students!).

I think I forgot to mention say that September is one of the hottest months in Suriname (“feels like” temperature > 102 degrees most days). So, we adjusted the schedule to measure fragments in the morning hours and, after lunch, enter data and have lectures until leaving at about 4:30pm to drive back to the city.

Plan A was to take waypoints by walking around the perimeter of the fragment and then walk N-S, E-W transects in the interior. “Walking” is often an exaggeration of what you can actually do in and around a forest fragment. The vegetation often consists of spiny, thorny, dense vegetation, particularly the smallest fragments; and, we were only able to make it around the perimeter of about 1/3 of the fragments. Perimeters of fragments are often defined by barbed wire, angry bulls defending their pastures or deep or broad canals. So, climbing over barbed wire into a pasture was only done once or twice, and then, very judiciously. 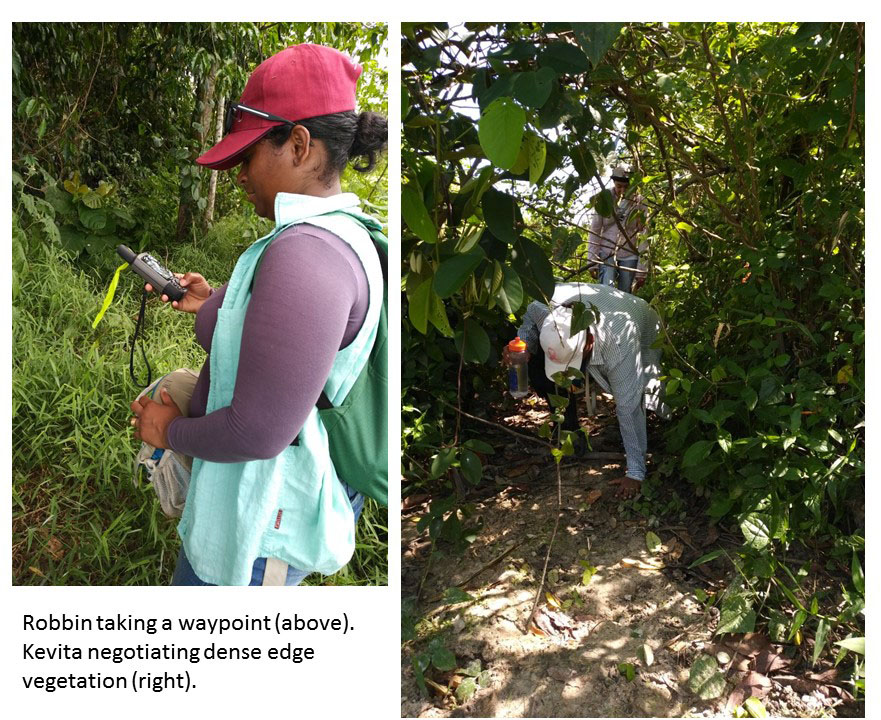 The number and diversity of canals were surprising to me, but they are everywhere in northern Suriname (see an example of a canal in the header photo). Maybe it has something to do with the Dutch insistence on making plantations in a swamp, but a prominent vegetation type in this part of Suriname is called “swamp forest.” We would have had a much harder time surveying our fragments in the wet season.

Okay, so what was Plan B? Instead of measuring the distance around the perimeter directly, we took a waypoint on the outside and cut our way into the interior of the forest. That is generally 5 to 20 m. We generally walked at least two perpendicular transects to the edges and took more waypoints. The distance between the waypoints became the length or width of the fragment. We hung pink flagging tape when walking in one direction and took the flagging tape down as we retraced our steps. 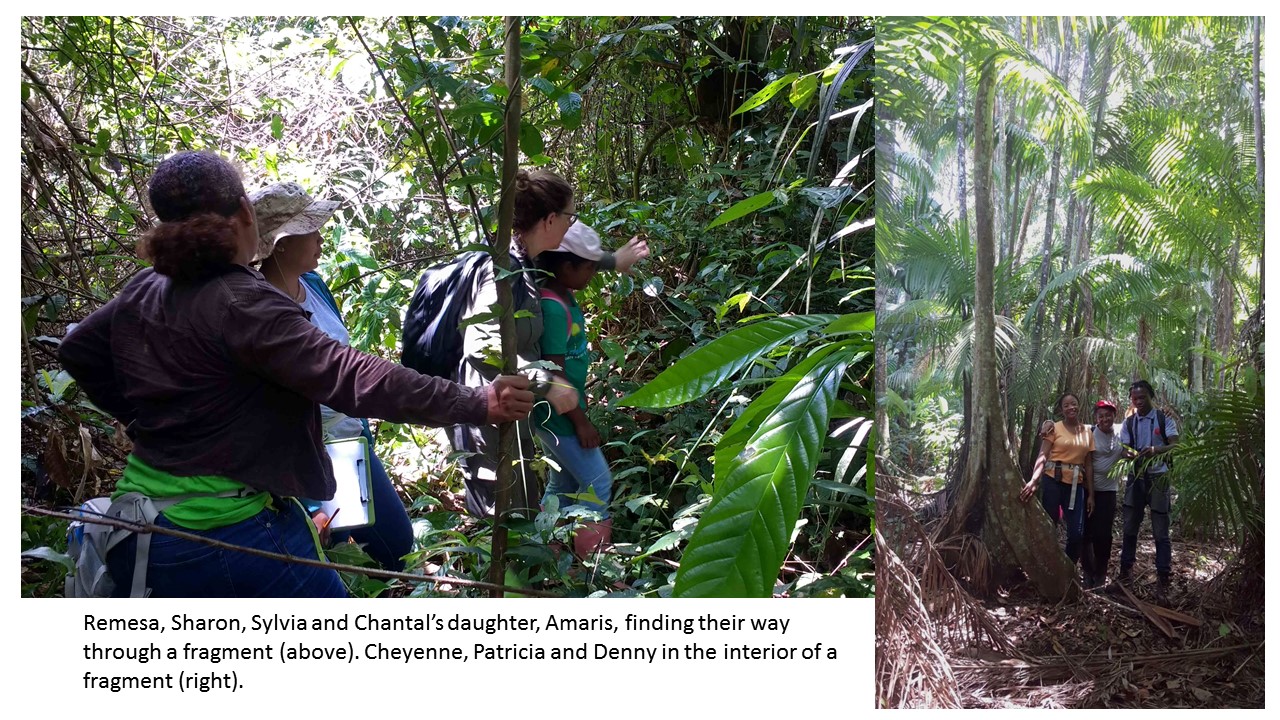 Once inside a medium or large fragment, the understory clears and we were often looking at tall trees. Given the long agricultural history on the coast of Suriname, we could characterize the forest as either younger or older secondary forest. Nothing pristine about it – but, the forest can be quite diverse. We know from camera trapping in other parts of the coast that fragments such as the ones we measured harbor large and small cats, peccary, and giant anteaters. Also, there may be a high diversity of birds and three or four species of the eight species of monkeys found in Suriname.

Next week: What we Found!