Sorry for the delay in this post! I have been busy analyzing our samples and giving talks in Suriname.

The figure below left provides some idea of the type of terrain in the vicinity of our study. This is quite an optimistic quadrant. Using Google Earth, I randomly chose a 5km2 portion of the area of Wanica District, Suriname. The Saramacca River is on the left and a large canal is visible running perpendicular to the river in the lower part of the image. I outlined and measured all of the separate fragments. About half of the area (2.25 km2) has forest cover currently. Then I compared this to the center of the area since 2011. It is obvious that a large chunk of forest (60 ha) was removed in the interim, but there has also been some regrowth in the center right portion of the quadrant, especially around the pools of water that could be sand mining or tilapia farming. Undoubtedly, there is a net loss of forest, but the more recent image on the left suggests that vegetation is beginning to fill in some areas of the fragment. We would have to see it on the ground to fully understand what is happening. Thus, we advocate using a two-pronged approach to forest fragment studies. Clearly, there is information on the ground that cannot be assessed from satellite imaging, but satellite imaging is the only way to look at historical differences, measure distance between fragments, and measure a lot of fragments quickly. 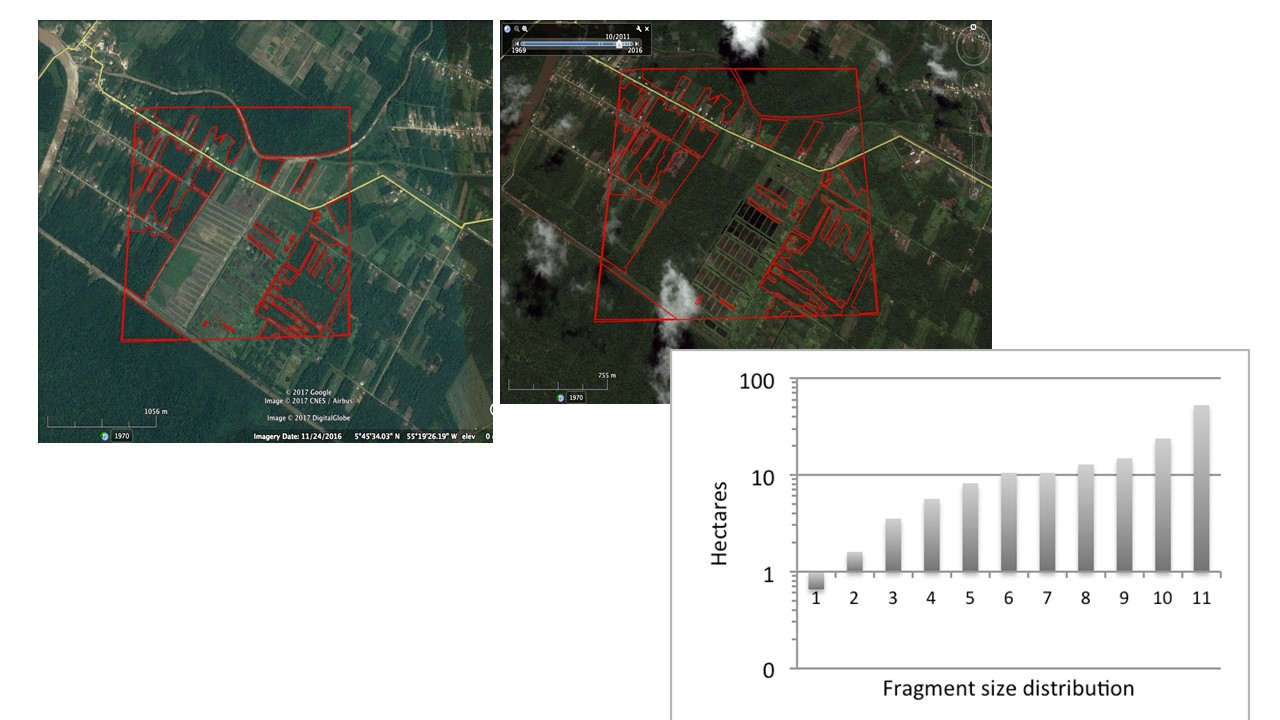 In each fragment, we took GIS waypoints on the perimeter. For several fragments, we were unable to walk around the fragment to take points (due to wary cows, barbed wire, deep canals, multiple owners), thus we took waypoints on edges that were reached from the interior of the fragment. We also attempted to also walk more than one transect (east-west; north-south) in the interior of the fragment and used tracking function on the GPS unit. In the small fragment (1.6 ha) below, waypoints are in blue and tracking points are in white.

It is well known that the “matrix” (type of habitat between fragments) makes a difference both in the biodiversity inside the fragment and the potential for forest regrowth outside the fragment. By the time we had measured most of the fragments, we started characterizing the fragment edges as “soft” or “hard.”  Soft edges included pastures, abandoned cultivated fields, little-used unpaved roads, and narrow canals. Hard edges were defined as house boundaries, large canals, or paved roads. 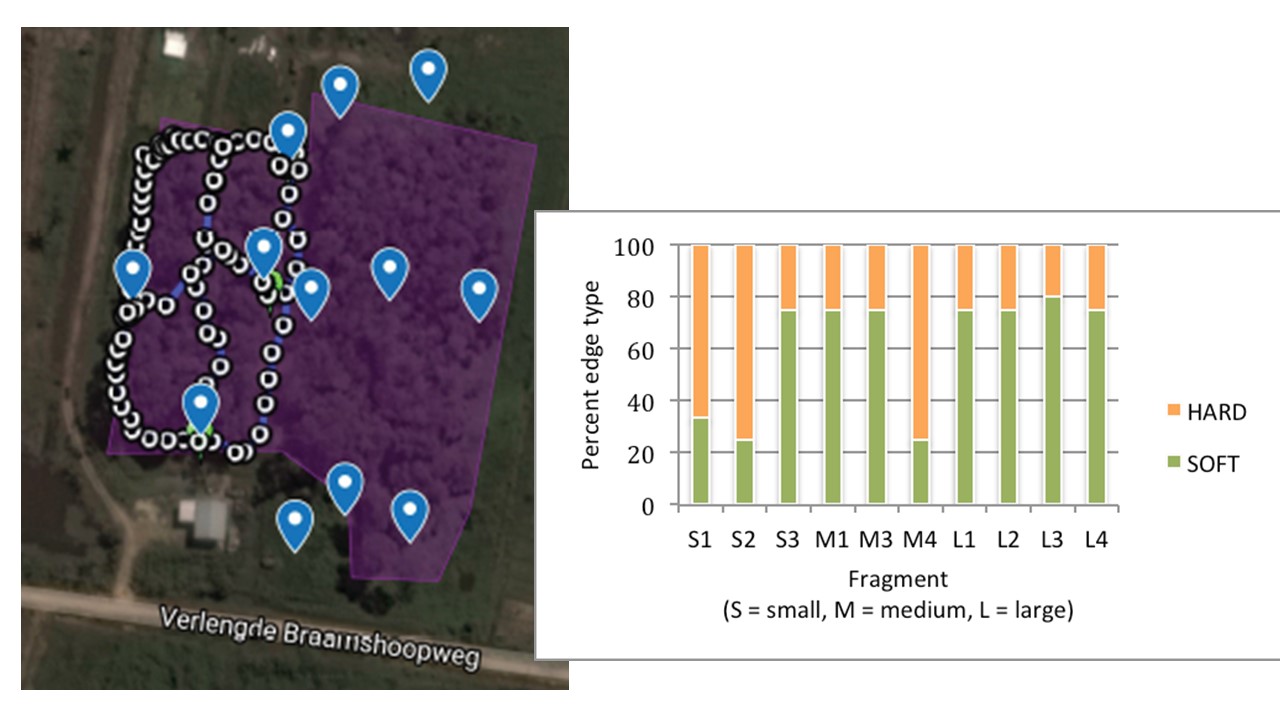 The smaller the fragment, the more likely it was to have hard (permanently disturbed) edges. Large fragments might occur in areas that are less disturbed, although that was not the case for all large fragments; one of the most valuable fragments was medium-sized that had mostly soft edges, but a large canal (permanent and wide) on one side. In this part of Suriname, disturbances that result in threats to the integrity of forest fragments are related to production (crops and cattle) and habitation (new houses and paved roads).

Next, we evaluated the 10 fragments in Wanica District on what we called their “potential for connectivity.” This was based on the characteristic of the edges (soft/hard) and distance to the nearest large fragments for a combined qualitative score of 1 = low; 2 = medium; 3 = very good. None of the small fragments (green diamonds) ranked above 1, but there was more diversity even in the medium-sized fragments (red diamonds). As we proceed to the next phase of the study in which we will talk to land owners about their impression of forests on their land), and finally to the point of advocating for the protection of some of the fragments, we will have to make choices about where to invest our energy. It has become clear that there is little point in trying to protect fragments in this part of Suriname that are < 5 ha in size. But, fragments that are > 5 ha or > 10 ha, particularly if there are multiple fragments about that size or near to larger tracts of forest, should be good investments for further attention and protection. 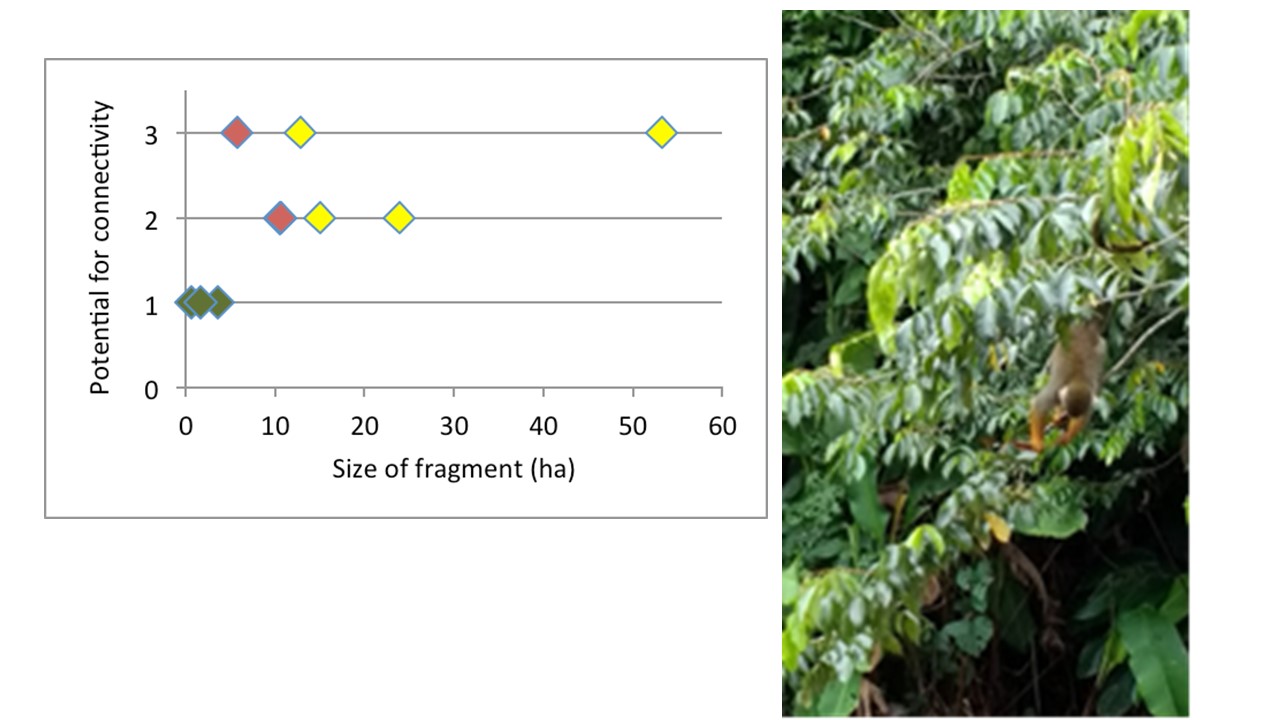 Finally, we tried to estimate some aspects of biodiversity. In retrospect there was too much going on in the mechanics of our fragment visits to gather detailed quantitative data on the animals and plants. Our anecdotal observations suggest that multiple fragments support primates, fruiting trees, burrows, and tracks of predators such as large cats. We saw squirrel monkeys in three of the large fragments in Wanica District; heard capuchins in the largest one and smelled the unmistakable odor of howler feces in two. Bird diversity seemed very active, but our observations were hit and miss.

The fragments we observed were mosaics of changing landscapes (e.g., recent clearing) (see below), fallow and current cultivation, reclaimed and active pastures, small and large canals). We noted the presence of high-quality trees in many fragments (see below) – producing fruit and flowers for seed dispersing birds and mammals, and pollinator activity. The bird population is undeniably diverse (but we will need an expert to help with this).  Monkeys (3 species) are present, some in sizeable groups. As mentioned above, the next two parts of the study include first, talking to landowners about their land and second, making a plan that could improve connectedness among fragments. 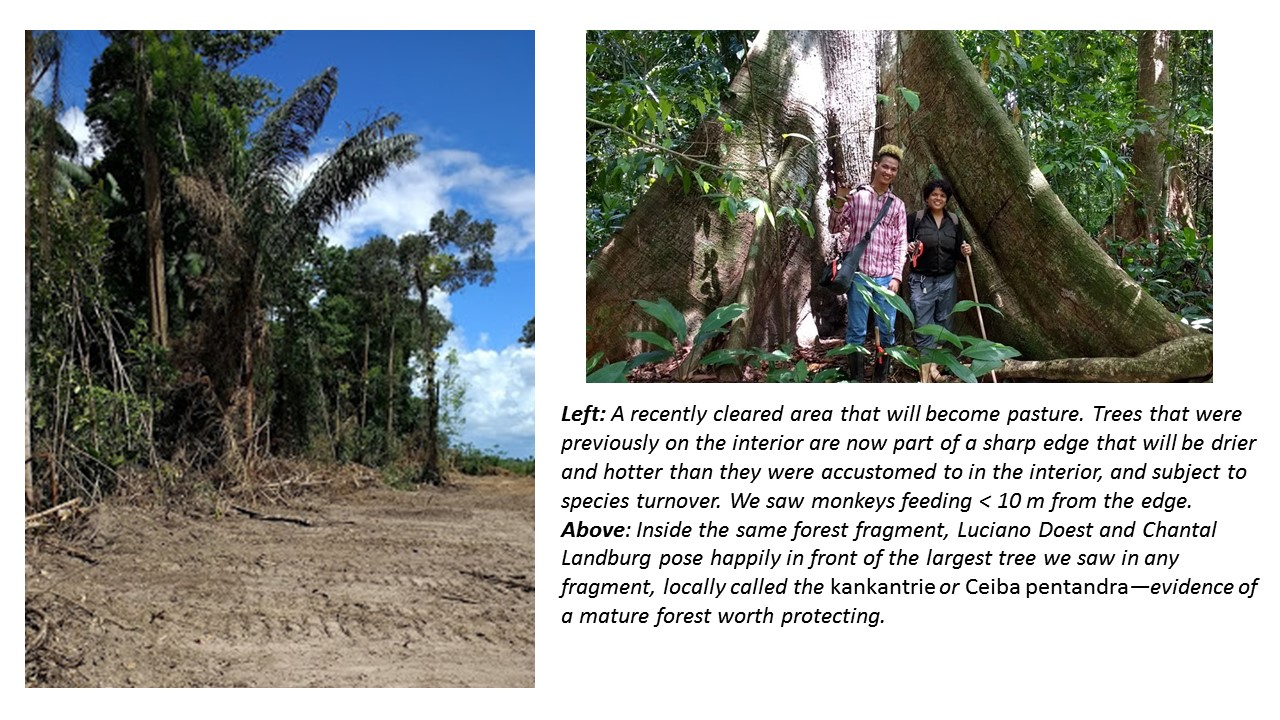 I will be leaving Suriname in about a week and will write one more entry before I leave. The Fulbright continues next February with some new twists on research!