It has only been a week since I last posted but in that short time span I’ve learned a lot. I began learning how to train the marmosets to participate in learning and memory tasks. I had never worked with live animals in a research setting before so this was a very new experience for me and one that is completely different than I’m accustomed to. I was told that training older monkeys is very difficult as they usually are not as eager to participate compared to the younger ones. Therefore, this week, I began training one older marmoset, Yann (see image below), and one younger marmoset, Roy. 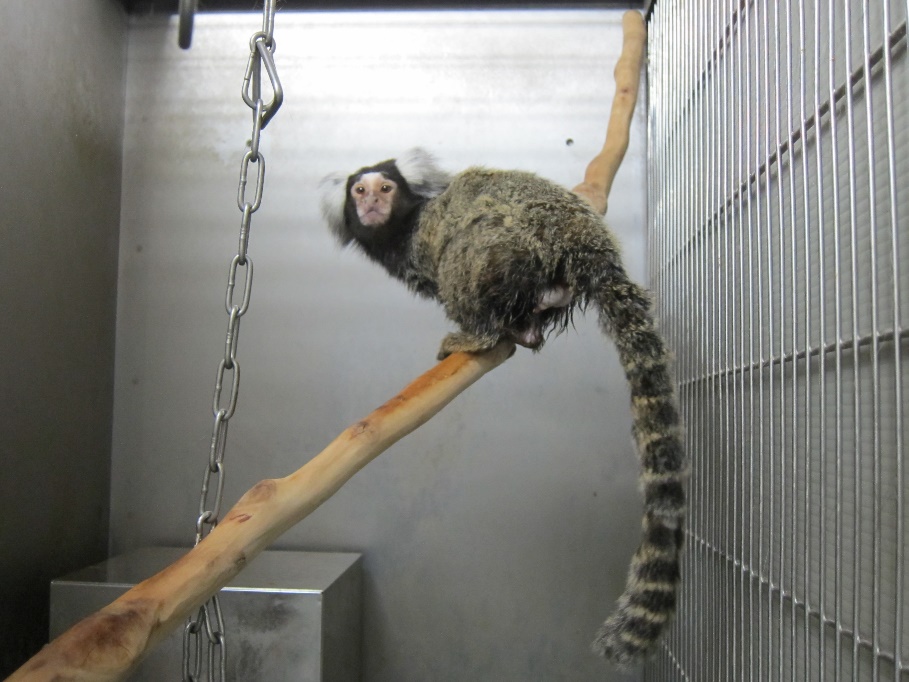 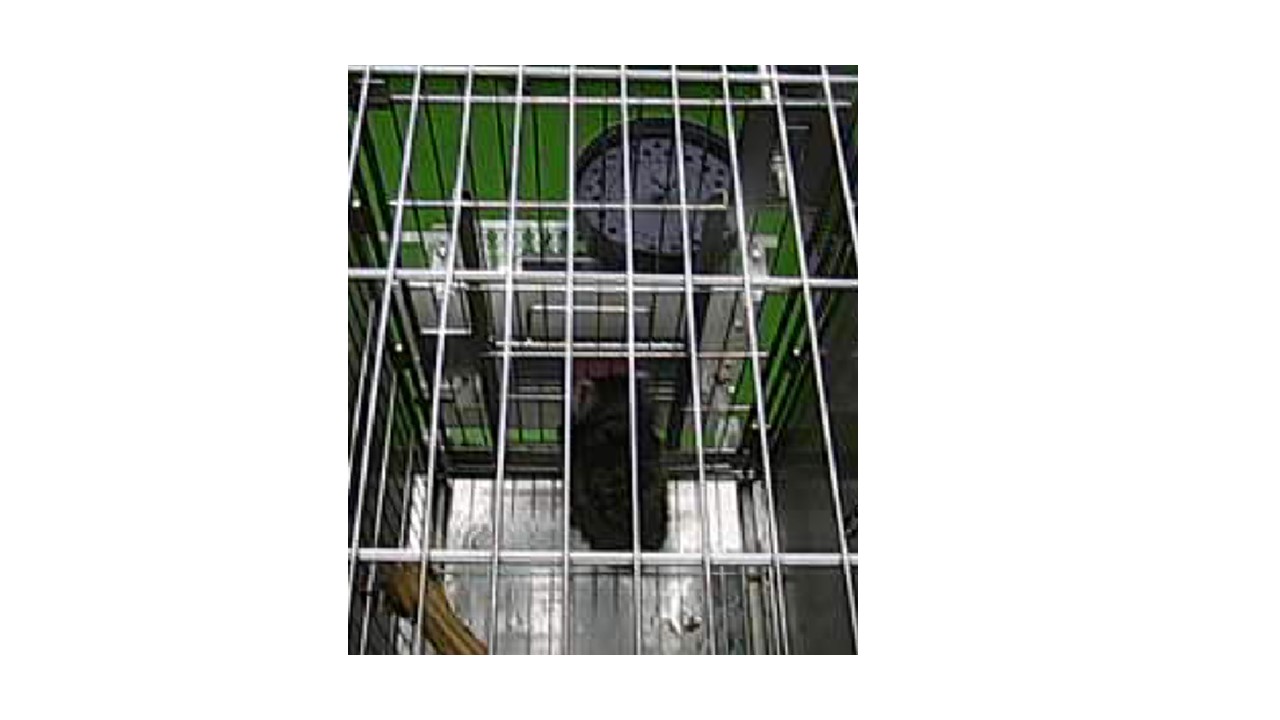 Once the marmosets learned to make the association between touching the screen and a food reward, the next step was to introduce new colors. Previously, the visual stimulus was only one color so in the second stage of training, the color of the visual stimulus changes each time it is presented. I was told that some marmosets do not like the color blue but luckily, neither Roy nor Yann disliked any color. 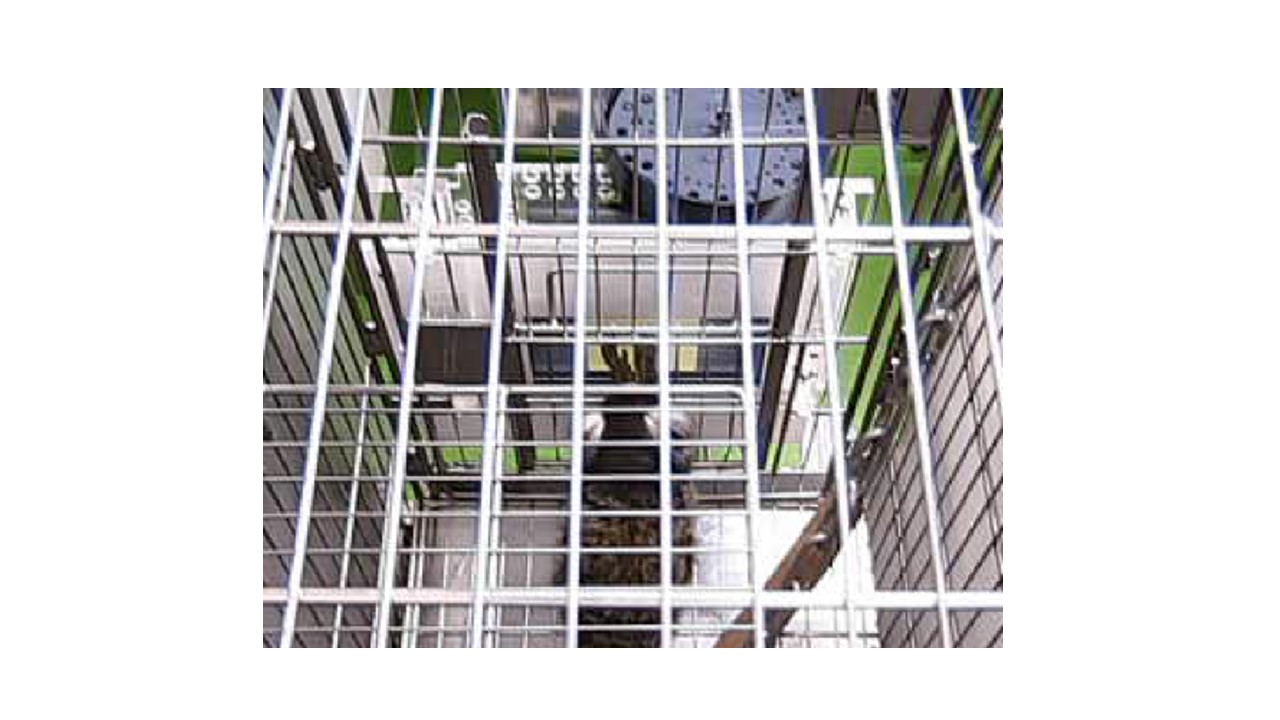 The next step following the color change is to slowly reduce the size of the presented image in a stepwise fashion. Initially, the image is a large square that covers a large majority of the touch screen and over a series of trials, the size of the image is slowly reduced. Compared to the previous trials, the marmoset is presented with an image that is slightly smaller. The image will not be reduced in size again until the marmoset learns to touch the current stimulus sufficiently. There are 3 different size stimuli, the last one being the same size as the stimulus that will be presented in a learning and memory experiment.

When the marmoset can easily touch a small image, that image is then positioned in various places on the touch screen at random. Previously, the image was always centered.

I trained the marmosets with an instructor for four days last week. The first major hurdle was that the computer systems on the touch screen computer we use for training and the computer used for video monitoring of the marmosets are completely in Japanese. Luckily, computer systems don’t vary between countries and I was very good at knowing what the button meant by its location on the screen or the order that it popped up. I also made a lot of drawings in my lab notebook of computer screens so that I would know what each thing said. There are a lot of steps that I had to take in order to begin training the marmosets but I had a great teacher and quickly began to learn the ropes.

So far, in my first week of training the marmosets, I noticed many differences between the younger and older marmosets. Roy is a very fast learner and he was always eager to participate and because of this, he progressed to the last step in only 1 week. Roy quickly made the association between touching the screen and the food reward and thus, was always very motivated to participate and soon began finishing each task in only a few minutes. Yann, on the other hand, is more deliberate with his actions and is progressing at a slower rate compared to Roy. We just started reducing the size of the image for Yann at the end of the week. Yann also made the association between touching the screen and the food reward but he struggles to touch the screen hard enough and sometimes, becomes very frustrated. He also discovered the apparatus where the food is dispensed and often takes breaks to double-check that there is still food there. He also likes to take his time between touches and slowly enjoy his reward.

This week, my host lab also had a welcome party for me. Everyone from the lab attended and I was quite touched. They provided two cakes each topped with a cookie that read “Welcome Emily”, one written in Japanese and the other in English. The cake was delicious. I also enjoyed the ice cream and tried rice cakes for the first time. The party was great, everyone was laughing and having fun.

After the party, I sat in the lab’s weekly seminar and learned about different cognitive testing that was used in previous primate studies and the possible application for marmosets.

This upcoming week, I will continue to learn how to train marmosets!

P.S. This is a picture I took from the PRI’s parking lot while out on my morning run. You can see the castle in the background. 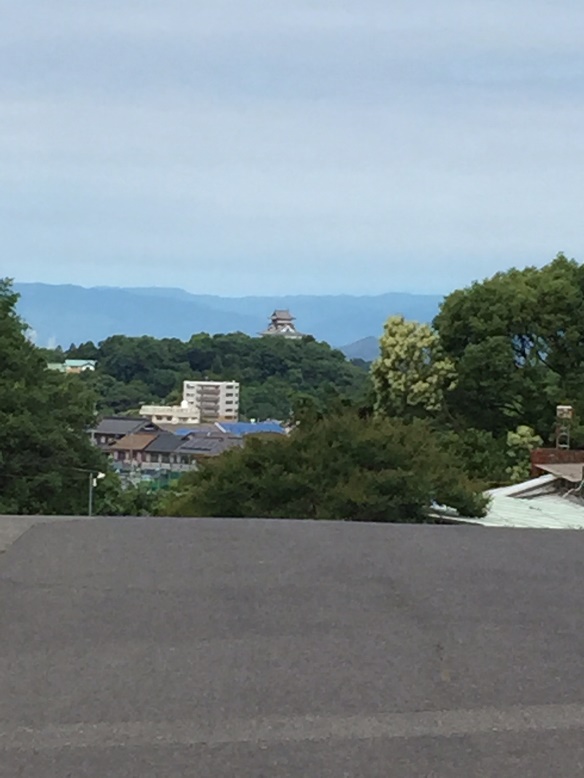