Marilyn Norconk reports on her Fulbright Research in Suriname

I’m on my way home after two months in Suriname. I arrived in Port of Spain, Trinidad, this morning at 5:55 am from Suriname and have a 10-hour layover ahead of me. With cappuccino in hand, I finally have some uncommitted time to write up my recent activities.

This Fulbright segment was truly a multidisciplinary event. Shortly after I arrived in early February, I began teaching a course called “Conservation Biology and Sustainable Development in Suriname” at Anton de Kom (AdeK) University in Paramaribo. My co-organizers were Sheila Marhé, the Science and Policy Director of Conservation International–Suriname and Dr. Max Huisden, Head of Environmental Sciences program at AdeK. The course was something of a 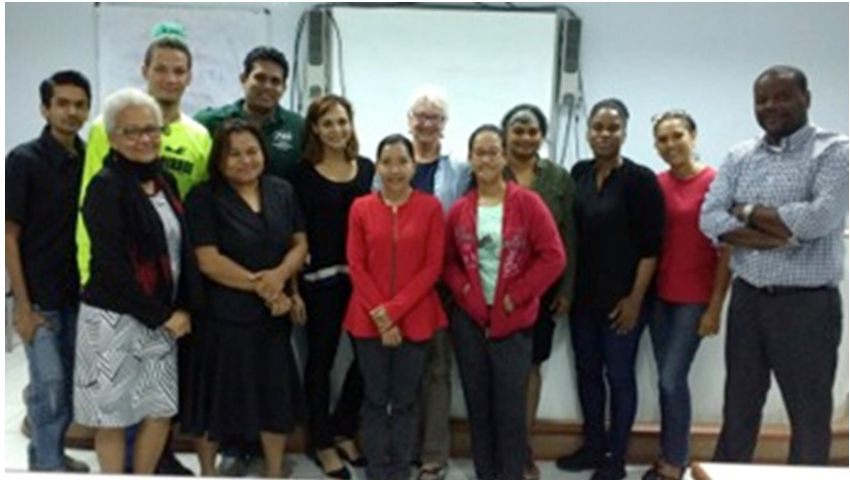 marathon – four hours a day, four days a week, three weeks. We opened it to non-students and ended up with a nice mix of students, faculty, government employees, and interested people.

I gave ten lectures in the first week and talked about everything from evolutionary biology and the forces of evolutionary change to conservation genetics and human population growth and its impact on the world’s climate.  Unfortunately, there is no shortage of modern examples to share with students, but one current news item caught my eye. “Day Zero in Cape Town, South Africa” was in the news the week the course began. “Day Zero” is the anticipated severe shortage of potable water in this large city. Like most conservation stories, it is complex, implicating a drought-prone habitat, overuse of resources (aquifers), human population growth, stress on resources, and an example of “tragedy of the commons.” As of a few days ago, the “end-date” has been extended from next month to 2019, but I think this is the first example of a major city literally running out of drinkable water.  There will be more. 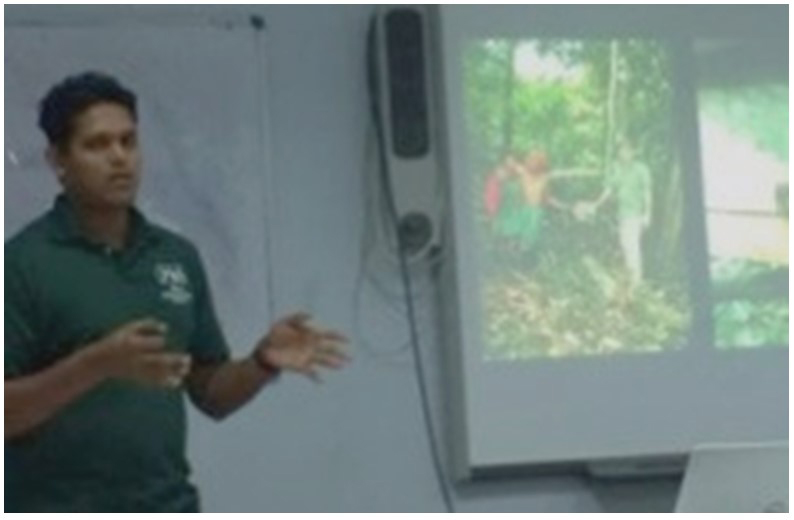 We could not have done the course without the good will and enthusiasm of a number of very talented and invested Surinamers. Their lecture topics ranged from the diversity and endemism of Guiana Shield plants and animals, to calculating forest cover and the REDD+ program in Suriname, the wildlife trade and hunting, overviews of the status of bees, birds, plants, mammals and monkeys in Suriname, national policies and laws, and the alphabet soup of international conventions. Niradj Hanoeman spoke about the Amazon Conservation Team’s work with indigenous groups in southern Suriname.

The relevancy of the course was brought home to me, and I suspect everyone in the class, during one of Sheila Marhé’s presentations. Seawater rise will eventually force a massive relocation of the population of Suriname’s capital city of Paramaribo – perhaps in the lifetime of the children living in the city. Paramaribo is not on the Atlantic Ocean, but about 15 km upstream on the banks of the Suriname River, a protected site chosen for a fort in the 17th century. But the region has already suffered losses of mangroves that protect the soils from erosion, and sections of the city flood after heavy rains. 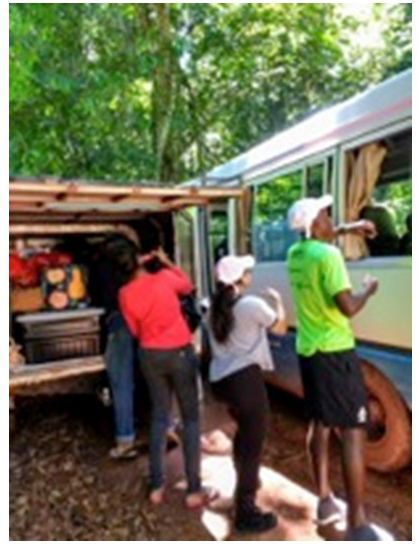 nservation Biology” ended on 22 February, I turned my attention to planning a 10-day research trip to Brownsberg Nature Park with the support and collaboration of the National Herbarium of Suriname. The Park is about 2.5 hours from Paramaribo, but stretched a bit when the largest of the three vehicles we were using balked on the slippery slope of the mountain road. Here, the students are moving luggage and food into two Land Cruisers. Eventually, we made it to the top and settled into the Herberg, a pleasant bunkhouse built for educational and research groups.

The research group consisted of two botanists from the herbarium, me, and about 17 energetic students from AdeK and the Forestry department of the Natuurtechnisch Institute, or NATIN.  The goal of the research was to assess growth rates of the more than 2,000 trees that had been identified, numbered and measured 15 years ago by Dutch 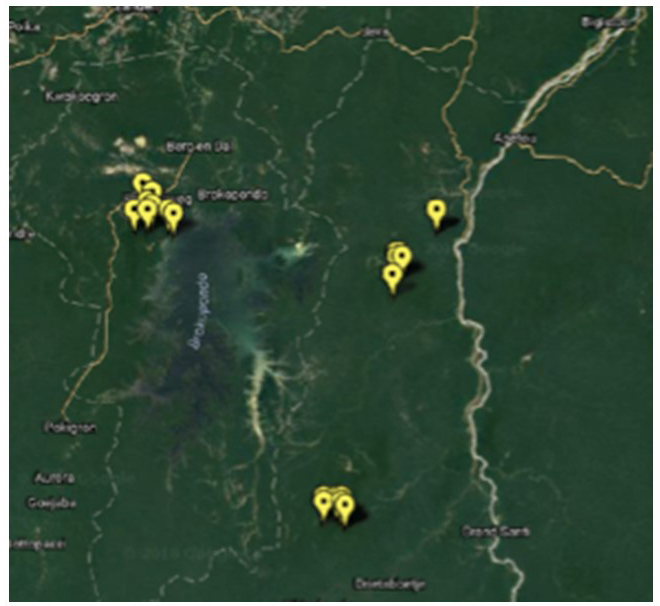 botanist Hans ter Steege. The 2003 project included Surinamese and Dutch botanists and tree-spotters. In the figure to the right, the Brownsberg plots are the most westerly set of yellow markers. The yellow symbols to the east (opposite and south of the Brownsberg plots) are on two other mountains called Lely and Nassau. The heavy line to the right of the plots is the Marowijne River, the border of Suriname and French Guiana.

Since about the 1990s, scores of permanent tree plots, most 1 hectare in size, have been “constructed” throughout the Amazon Basin (see the Rainfor website). The plots, with repeated measurements, are proving to be important indicators of climate change, contributing to knowledge of carbon storage and used for a variety of other ecological studies. We hope to contribute to an international database of plots with repeated measurements.

The Brownsberg is a bauxite/granite flat-top mountain that is entirely forested. The plateau is an ancient surface, formed during the Precambrian and eroded to form the mountain slope and lowland below. The top of the Brownsberg (elev. 510 m) consists of exposed rock and relatively thin soil. There are many such geological formations in the Guiana Shield (Venezuela, Suriname, Guyana, French Guiana, and northern Brazil), and unfortunately, some of them are also sources of gold and other minerals. The Brownsberg is located in the greenstone belt of Suriname. These forests and streams are being devastated with mining equipment. Dismissed by the mining industry as “overburden,” the trees in these forests may be 500 to 1,000 years old (see below).

With two or three measuring teams, working about 9 hours a day for seven days, we were able to measure all the trees that we could find still bearing their original numbered tags. I spent the last two weeks of my Suriname stay at the university herbarium analyzing the data and giving three talks before leaving the country.

Some of our fin 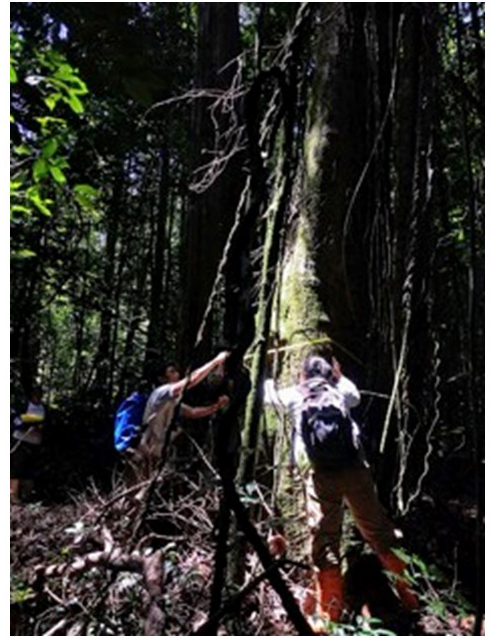 dings were expected, as they conform to general characteristics of tropical forests: a) many tree species are relatively rare (1 or 2 individuals per hectare), b) more than 50% of the trees were in the smallest category (10-20 cm DBH or diameter at 1.3m height), and c) fewer than 1% were in the largest category (> 100 cm DBH).  Most protocols call for 10cm DBH as the minimum diameter to include trees in the plot.

The average absolute growth increase of all the trees was 3.1 cm (in 15 years!), an average of only 0.21 cm per year. Some trees exhibited substantial growth since 2003; others were the same size and exhibited no growth.

The 21 trees in the largest size category (100+ cm) were particularly impressive. Representing 10 plant families they are majestic, iconic trees inhabiting, we must assume, a never-logged forest. Project co-organizers Guno Marjanom (left) and Sabitrie Doerga Jairam (right) measure a large tree. There are three to eight of these giants in each of four plots and none in one plot. Estimates from trees in the central Amazon Basin were made in a 1998 paper using carbon-14 dating. Because there are no growth rings in tropical trees, they cannot be easily aged. Based on the similarity of species composition with the Manaus (Brazil) study, the large trees in our sample are likely to be at least 400 years old, and perhaps older than 800.  While trees this size are attractive to loggers, they provide an outsized service in carbon storage and provide thousands of flowers and seeds as food to animals and well as nesting for birds and mammals. And when they fall, they create opportunities for understory trees to soar.

Looking at the DBH measurements, we found that “inter-family” differences in growth generally exceeded within-family growth rates. This is interesting because the plots were located in two different “habitats”--the top of the mountain and the side slopes. The relative invariance of tree growth may be due to consistency in wood density within a family. Alternatively, the environmental difference between plateau and slope may not be as ecologically significant as we supposed. That is, trees may not recognize the plateau and slope as significantly different habitats and they are within a few kilometers of each other.

Thus far, I’ve examined species distribution and growth in two common plant families on the Brownsberg, the Fabaceae (legumes) and the Lecythidaceae (iconic trees of the Guiana Shield – the brazilnut family). Although most species in these families are found on both the slope and plateau, Fabaceae species are more common on the plateau and Lecythidaceae species are more common on the slope. A few species were not found in the other habitat, but that could be due to small sample size. Comparing tree growth, Fabaceae are faster growers on average, no matter where they are found.  So far, we have not found a straight-forward answer to the issue of effect of habitat variation on the distribution of tree species, but genetic similarities within a tree family may explain consistencies in growth patterns.

In addition to the research and teaching, my residence in Suriname was immensely affected by wonderfully generous people, particularly friends Monique Pool, Chantal Landburg, Ari Vreedzaam, Iwan, Isabella and Muriel Molgo, the staff at the herbarium, and many former workshop (2013-2017) students. How wonderful it has been to see many of them move into environmentally-relevant careers in Suriname! 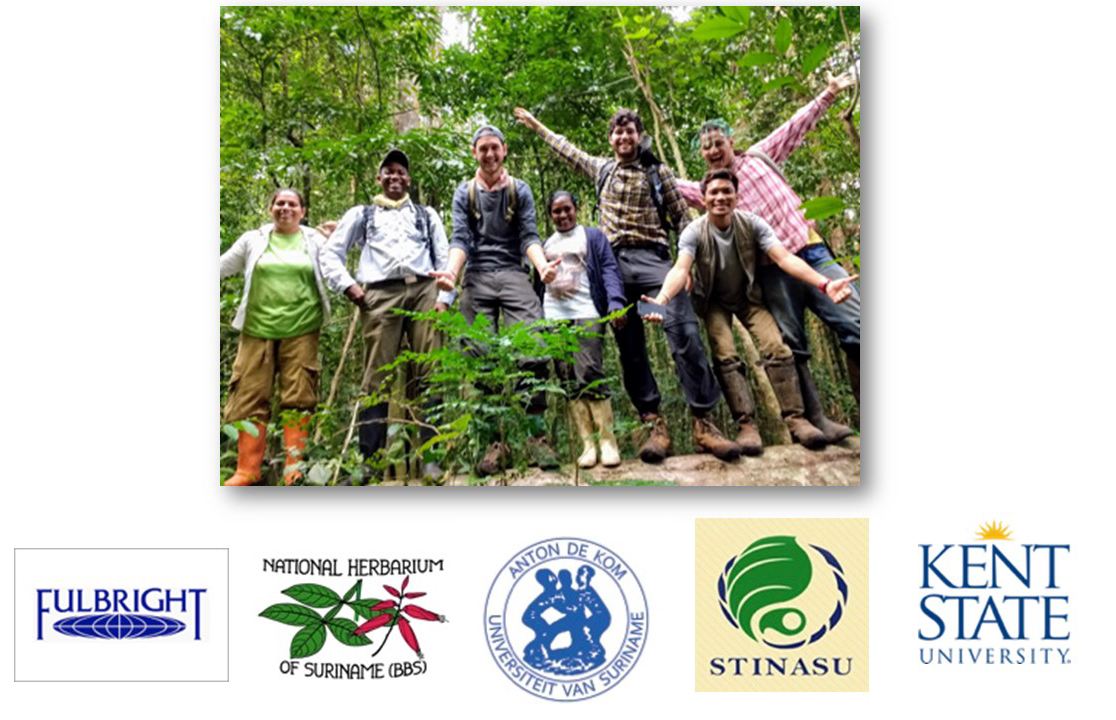