From the lab: The hominid ilium is shaped by a synapomorphic growth mechanism that is unique within primates

PhD candidate Dexter Zirkle and Dr. C. Owen Lovejoy have examined the development of the human hip joint, and report that its growth is uniquely determined by a special mechanism that is shared only by humans and our direct ancestors (i.e., hominids). Their study is out this week in PNAS.  No other primate has this mechanism. When anatomical characters are found to be unique in an ancestor-descendant lineage (or “clade”) they are termed “synapomorphies.” A recent study* found five hominid synapomorphies since the last common ancestor we shared with chimpanzees. Three are found in the base of the skull and two are dental. The one reported here is the first postcranial synapomorphy. 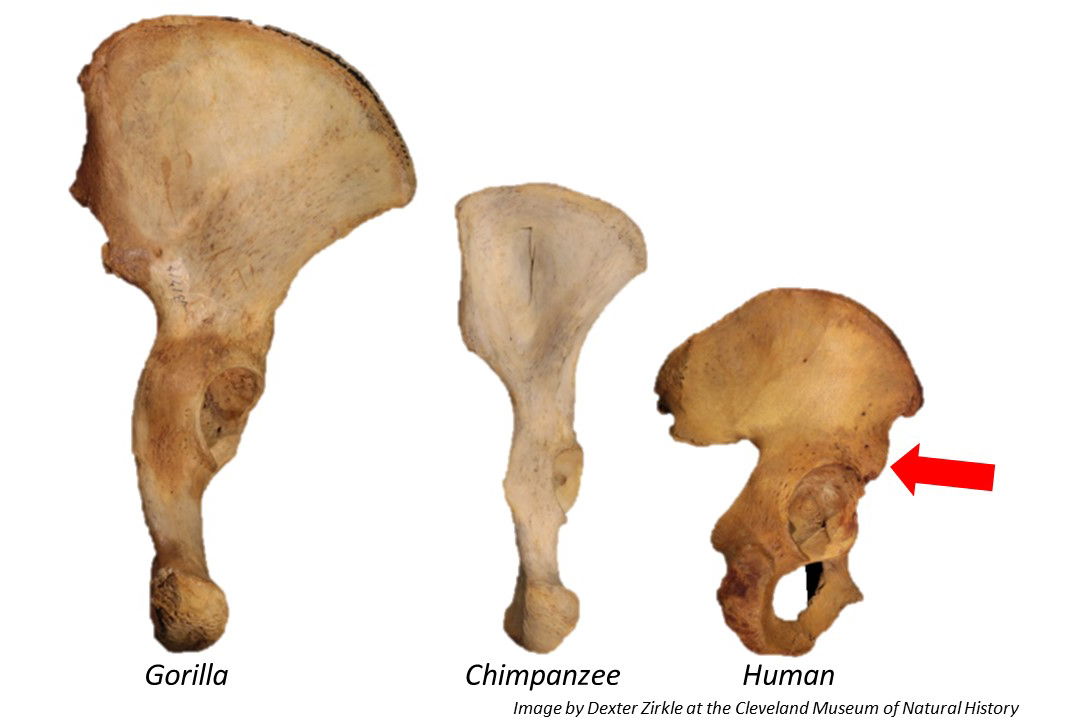 The scientists report that the human growth “signature” of this region is unique and differs radically from its counterparts in other primates, especially chimpanzees. In all other higher primates the ilium is tall and narrow, whereas in humans it is short and broad. These proportional changes are typically difficult to define metrically in a manner that clearly defines them as uniqu. However, the human hip joint includes formation of an entirely novel “growth plate,” which underlies its unusual form as being much shorter and broader than in other primates.

Modern chimpanzees and humans shared their last common ancestor somewhere between 7 and 9 million years ago. Chimpanzees and humans differ extraordinarily in their locomotor skeletons but also, these authors now report, in the growth and development of the region of the pelvis near its hip joint.

In adapting to upright walking, one element of the pelvis, the ilium, has been especially modified in order to facilitate bipedal stance.  To achieve this change, a region of the hip joint has changed its fundamental developmental trajectory. This has caused the ilium to become much shorter and broader than it is in all other primates. These differences in adults have been known to exist since scientists first began to study human anatomy and development, but the uniqueness of this special mechanism of human (and ancestral hominid) hip growth has remained unrecognized until now.

Although the mechanism can only be seen directly in subadult individuals, it is so unusual that it almost certainly has been the primary route of morphological change in the human ilium since our ancestors began to walk upright, and even though it cannot be directly observed in adult skeletons, the change in shape is so profound that any pelvis that exhibits this substantial change in shape almost certainly did so it by using this mechanism.

This means that a simple metric test can be performed on any pelvis thought to be a human ancestor in order to determine if it is indeed a “hominid.” All currently known potentially human fossil pelves “pass” this metric test. The unique growth mechanism that is responsible probably made its first appearance in the human lineage shortly after our divergence from the ancestors of the African apes.

Our oldest, well-known, fossil ancestor is 4.4 million year old “Ardi” (Ardipithecus ramidus), recovered from Ethiopia and described in the journal Science in 2009. Although she walked upright, she still had an opposable great toe and was still fully capable of climbing trees in the woodlands in which she lived.  By 3.7 million year ago, another likely ancestor, “Lucy,” (Australopithecus afarensis) had become a fully evolved terrestrial biped. Lucy’s offspring spread over eastern and southern Africa, dwarfing the success of all other apes, eventually culminating in the emergence of our genus, Homo.  Both of these fossils have unusually short and broad ilia, which reflect their substantial adaptation to upright walking, and because their iliac shape is so unique among primates, their anatomical structure almost certainly resulted from the special growth mechanism seen in modern humans.  A common humorous approach to teaching human anatomy is that it doesn’t need to be intensively researched because it “hasn’t changed in many thousands of years so there’s nothing new to be found.” But this discovery goes against that typical viewpoint. A telltale sign of this special mechanism was first reported to be present in an australopithecine pelvis in 1958 by the anatomist Raymond Dart (who first coined the taxonomic name “Australopithecus”). However, the uniqueness of this growth mechanism is now reported in the current PNAS article, i.e., it is not found in any other primate.

The human ilium is significantly shorter and broader than are those of all other primates. It also exhibits a structure called the “anterior inferior iliac spine” (AIIS) that emerges via a “secondary center of ossification.”  The AIIS is unique to hominids (i.e., all taxa related to the human clade following their phyletic separation from the African apes). The authors tracked the ontogeny of the ilium in human and subadult primate pelves. They found that the human sequence of skeletal changes in the hip joint is unique to ourselves and our ancestors from the human early prenatal skeleton through the teenage years. The resulting novel shape of the human ilium has allowed two muscles of the upper pelvis to occupy a unique position that allows them to prevent “drop” of the unsupported side of the pelvis when taking a step as a biped. This novel growth process is therefore a hominid synapomorphy which can be used to assess the presence of upright walking in extinct taxa. It also demonstrates that relatively advanced bipedality is likely substantially more ancient than previously thought.