With my third week completed, I am now about half way through my internship here at the Primate Research Institute! The past few weeks have been a whirlwind of new experiences. I can’t wait to see what is in store during my last few weeks in Japan, both scientifically and culturally. 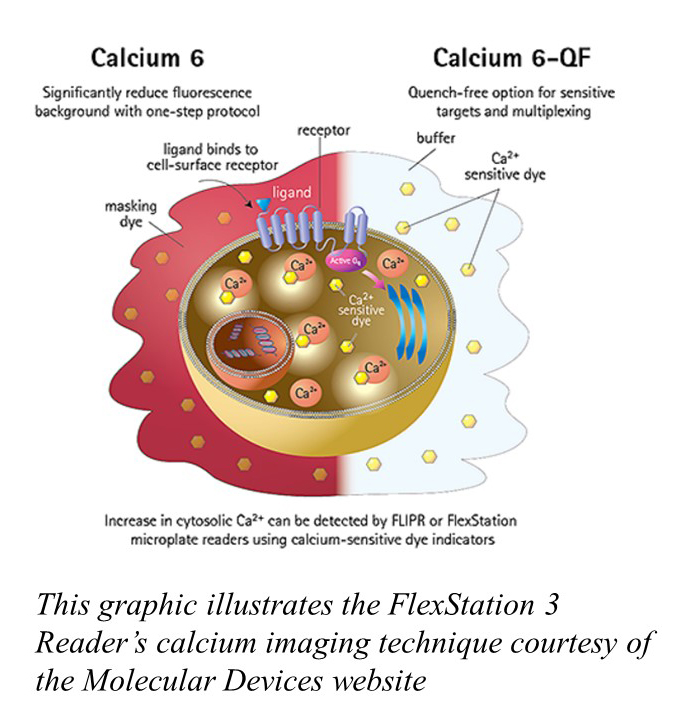 Last week I discussed the vector creation and transfection steps of the functional analysis protocol. The final stage of data collection is calcium imaging using a FlexStation 3 Microplate Reader. In my first blog, I briefly explained that the TAS2R38 gene codes for a G protein-coupled receptor or GPCR. The GPCR mechanism involves signaling pathways inside of the cell initiated when a ligand binds to the receptor. This signaling pathway involves the release of calcium into the cytoplasm of the cell. You may know calcium as an important compound in bone formation and general physiological health, but it also plays an important role in cell signaling pathways. It acts as a messenger in a series of molecular events that eventually results in a cellular response. In the case of taste receptors, bitter substances bind to the receptor and stimulate the release of calcium. Then it activates other channels, which eventually leads to a signal sent to the brain saying “hey, we are tasting something bitter”. We can measure a receptor’s response to ligand binding by measuring the release of intracellular calcium, and this is exactly how the FlexStation reader works. Before loading our 96 well plate into the machine, we add a calcium-sensitive dye to the samples and incubate in the dark for 40 minutes. The dye is taken into the cell. During the incubation period, a dilution plate of PTC ligand at 8 varying concentrations is created.  When the ligand is added to the TAS2R38 receptor samples in the FlexStation reader, the calcium-sensitive dye binds to the released intracellular calcium. The reader detects the calcium increase using the dye indicator’s fluorescence. Then we can analyze the raw data using statistical software.

In my last blog post I mentioned testing 3 different Japanese macaque haplotypes, Mf-A, Mf-B, and Mf-O. Each of these represents an allele, or different versions of the TAS2R38 gene. Remember, a gene is the basic unit of inheritance, and alleles are variants of a gene. They arise because of small mutations, or changes in the DNA code. They persist in a population if these mutations are not harmful to an individual and are passed on from parent to offspring. When there is more than one allele for a gene present in the population at >1%, this gene is called polymorphic. To put it into the context of this project, Japanese macaques are polymorphic for the TAS2R38 gene with over 10 different alleles! Let’s take a closer look at the Mf-A, Mf-B, and Mf-O alleles and how they vary from each other.

This table from Hashido et. al 2015 demonstrates the changes each allele has compared to the Mf-A allele, the highest frequency, or wild type allele (in purple). Dots in the chart indicate the same base as in Mf-A, while letters indicate a base change. Remember, DNA consists of 4 different nucleotides, with bases A, G, C, and T. For example, the Mf-B allele (green), has one nucleotide change from T to C at position T812C in the TAS2R38 gene. If there is a change in the DNA sequence, then there can be changes in the mRNA and finally, the resulting protein. Although this is only one base change, it may explain why the Mf-B allele has a lower sensitivity to PTC than the Mf-A allele. Mf-O has the same mutation and an additional change further downstream, at position K320T – which may lead to an even different level of PTC sensitivity.

Weekend excursions to Osaka and Nara

This past weekend I traveled to Osaka, a large city in the Kansai region of Japan. About 2 hours away from Inuyama, this was my first experience on the shinkansen, or bullet train. Reaching up to 200 mph, I was amazed by the efficiency and comfort of the shinkansen. Viewing the landscape of Japan while on the train was gorgeous and peaceful, and before I knew it I had arrived in Osaka. The public transportation in Japan is wonderful. Whether local or long distance, it is incredibly easy to make your way around the country. I wish we had a shinkansen in the US! Upon arrival in Osaka, I headed straight to its castle. The castle was originally built in 1583, and the grounds cover 15 acres. There is an outer moat surrounding the castle’s main building and a large park. The view from the main tower was spectacular. Later, after eating some delicious matcha (green tea) ice cream, I went to an okonomiyaki restaurant for lunch. Okonomiyaki is best described as a Japanese savory pancake. I picked pork okonomiyaki, and it was cooked right in front of me on a huge flat grill. I only remembered to take a picture half way into the meal; I think this speaks for how delicious it was. I spent the evening wandering around Osaka’s Dotonbori area, a large entertainment area with all sorts of delicious street food and a canal. Here I tried a popular Japanese snack, takoyaki, which is a ball-shaped dumpling filled with diced octopus (tako), tempura scraps, and green onion. These in particular had cheese in them as well. They are topped with takoyaki sauce (similar to Worcestershire sauce) and mayonnaise. So delicious!! Some of my hostel friends and I closed out the night by heading to the Abeno Harukas 300, a 300-meter-tall skyscraper with an observatory on the 60th floor. It was a perfect ending to the night. Seeing all of Osaka lit up under the crescent orange moon put this trip into perspective for me. I am so grateful to make these memories that will last a lifetime. 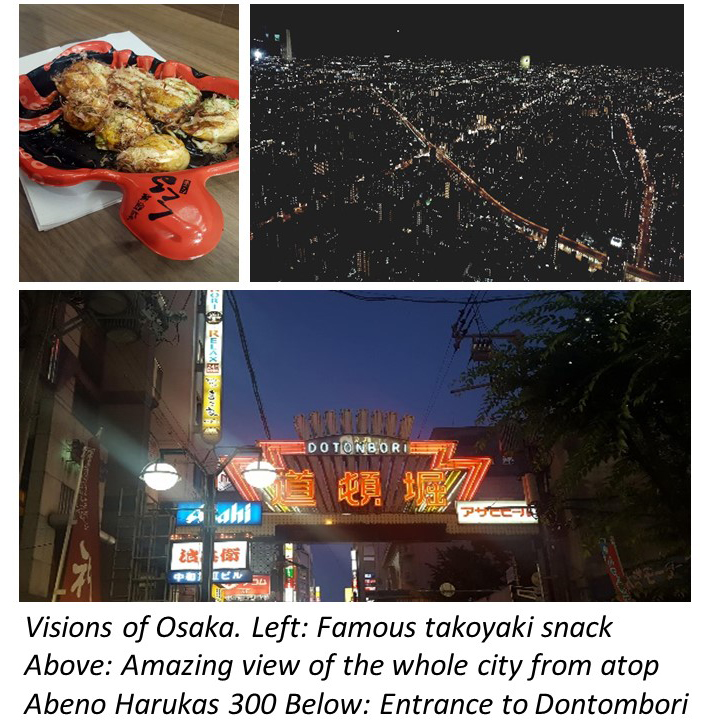 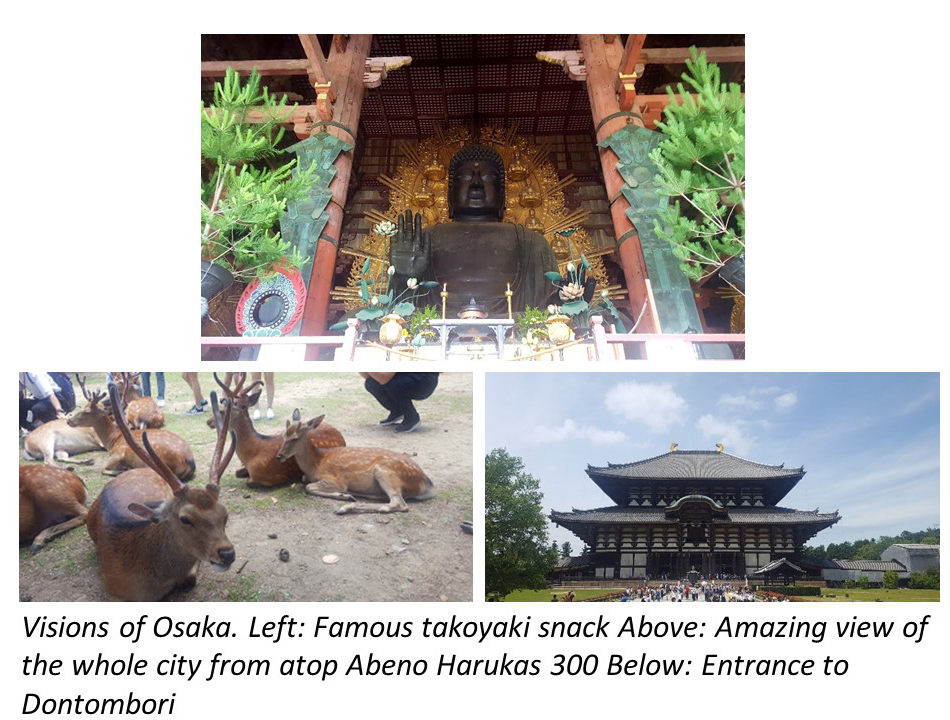 The next day I took a trip to Nara, which is about an hour away from Osaka. Nara was the capital of Japan from 710 to 794 AD, and it is a very popular place for tourists because of the sacred deer that inhabit it. They are regarded as messengers of the gods in the Shinto religion. I and many others enjoyed feeding them deer crackers! Next was to see the largest bronze buddha statue in Japan, the great Daibutsu, at Todai-ji temple. Todai-ji temple is a UNESCO World Heritage site, and I was astounded by its beauty. I was not prepared for the Great Buddha Hall. Standing 50 feet high, I was in awe at the sheer size and absolute exquisiteness of the buddha. A sense of great peace fell upon me walking around in the temple. I do not subscribe to a religion, but the dedication and absolute beauty of the Todai-ji temple was inspiring. I say dedication because the temple was rebuilt several times after multiple fires and earthquakes, with the entire Nara community assisting with the reconstructions in some way.

I am still reflecting on my experiences from the past week, but I am inspired every day by the beauty of Japan. From the observatory tower in Abeno Harukas, a stunning example of advanced technology, to the ancient Todai-ji temple and great Daibutsu, I am amazed by the intertwinement of tradition and technology here. Stay tuned for another week of internship research and a weekend trip to Kyoto in blog post #4. 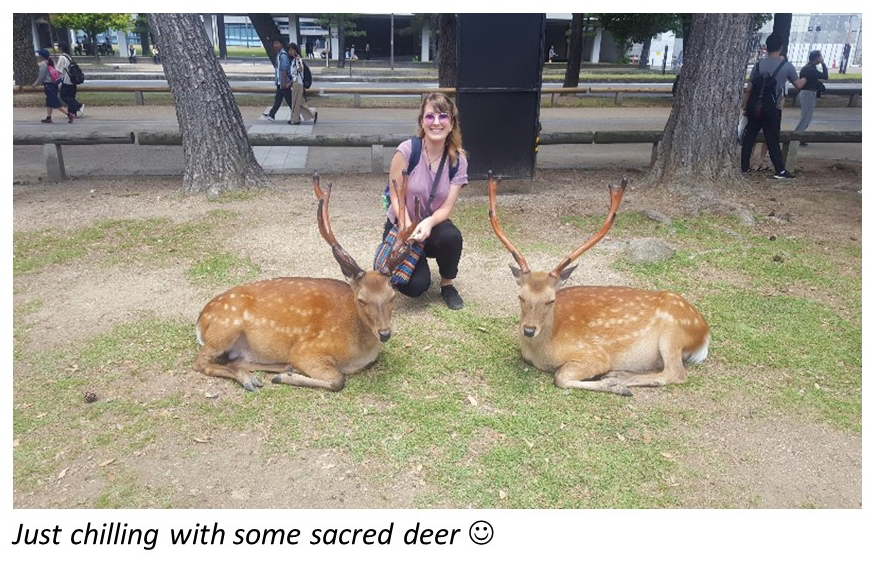