Researching and meeting the Japanese macaques of Arashiyama

This past week has been a whirlwind of research and sightseeing. I began my week researching more on the nihonzaru (ニホンザル) or Japanese macaque and some of the locations they inhabit. One of the most interesting things about the TAS2R38 gene is its inter- and intra-species variation across 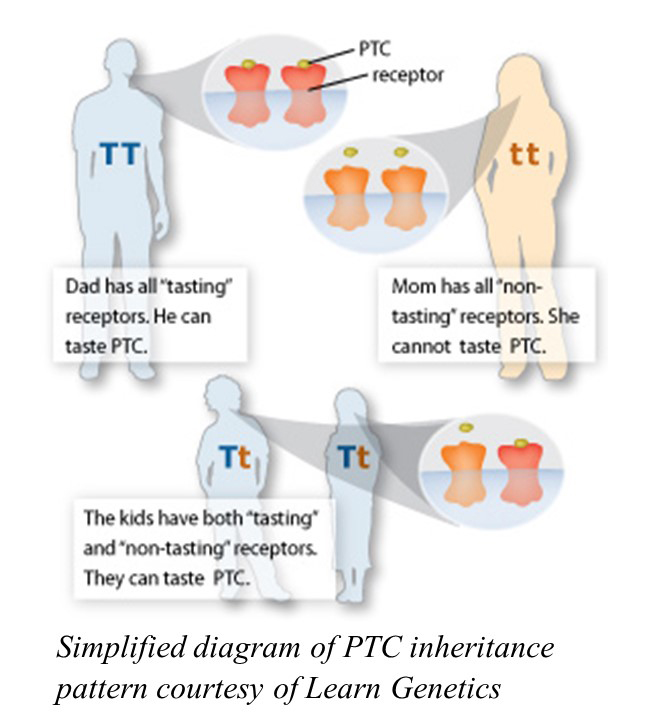 the primate order. Let’s take humans, for example. The human equivalent gene, ht2r38, has seven different alleles (different versions of a gene), although only two exist in high frequencies outside of Africa. Differences among three amino acids, which are the building blocks of proteins (including the TAS2R38 receptor) account for most of the variation between the two most frequent alleles. We call the alleles PAV and AVI for the amino acids they encode, but you may know them as ‘taster’ and ‘non-taster’ alleles. HT2R38 follows an autosomal inheritance pattern, where the taster allele is dominant over the non-taster allele. (Autosomal refers to a chromosome that is not a sex chromosome such as ‘X’ or ‘Y’.) This means an individual only needs one taster allele to be able to taste the bitterness of PTC. If an individual has two taster alleles, they are called homozygous dominant. If an individual has two non-taster alleles, they are homozygous recessive and PTC is virtually tasteless. An individual with one of each allele is called a heterozygote and has a mild ability to taste bitter PTC. If the taster allele allows humans to taste and distinguish some plants as toxic, why does the non-taster allele exist in populations at around 30% frequency? You would expect the taster allele to be the most advantageous allele for survival, and for the non-taster allele to disappear from the population, right? This issue has long intrigued geneticists. One hypothesis states that the non-taster allele, although it does not recognize PTC, may recognize another ligand not yet discovered. Another hypothesis is that both the taster and non-taster alleles have been maintained by balancing selection -- selective forces that preserve genetic diversity within a population. Variation is incredibly important for evolution. It is what allows a population to adapt and survive. No environment is completely stable and if a population doesn’t have the genetic diversity to change with it, it may go extinct. One example of balancing selection is called heterozygote advantage, where the heterozygote has a higher fitness than either of the homozygote individuals. Is this what is going on with ht2R38? What about Japanese macaques? Why do we see astounding variation in the TAS2R38 gene? Stay tuned next week where I’ll explain my best hypotheses specifically about the Mf-O haplotype. 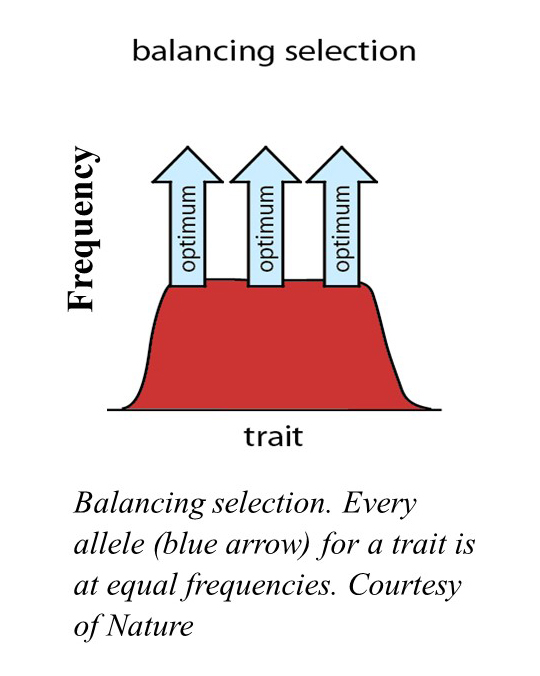 Trip to Arashiyama
This week Imai-sensei, Mita-san and I traveled to Arashiyama, a district on the western side of Kyoto, to visit the Iwatayama Monkey park. The free-range park is located on Mt. Arashiyama, and we traveled far uphill to meet the wild Japanese macaques that inhabit the park. While Japanese macaques normally live in groups of 20-30 individuals, the Arashiyama troop is comprised of over 170 monkeys! I have read a lot of literature about macaques for my research, but this was my first time observing them in person. I noticed a few interesting things about the macaques’ behavior.  First, they were overall docile and unfazed by human contact. Although this is a wild population, they have become accustomed to human contact and especially the food items they receive daily from park workers and visitors. June is about the middle of the birth season, so we saw a few mothers with small babies. I have read that a mother and infant will keep their distance from the rest of the troop, interacting sometimes only with other females. Male parenting is moderately rare in macaque groups. I observed a few small altercations, and tension seemed particularly high around one mother and her newborn. As she waited near the feeding center (an indoor enclosure where visitors can feed the monkeys fruits and peanuts), she seemed very anxious and would get upset when another monkey would come too close. I also noticed a clear dominance hierarchy. Dominance hierarchies exist among females as well as among males. Female hierarchies are kin-based and females stay in their natal group creating strong matrilineal lines. Male dominance is subject to change and one male will attain alpha status while tolerating other males in the group. I observed two young animals playing atop the roof of a feeding station, when a large male came into the area and sat down. Immediately, the two young monkeys stopped playing and sat patiently awaiting the male’s departure, but finally left to play in a new area after 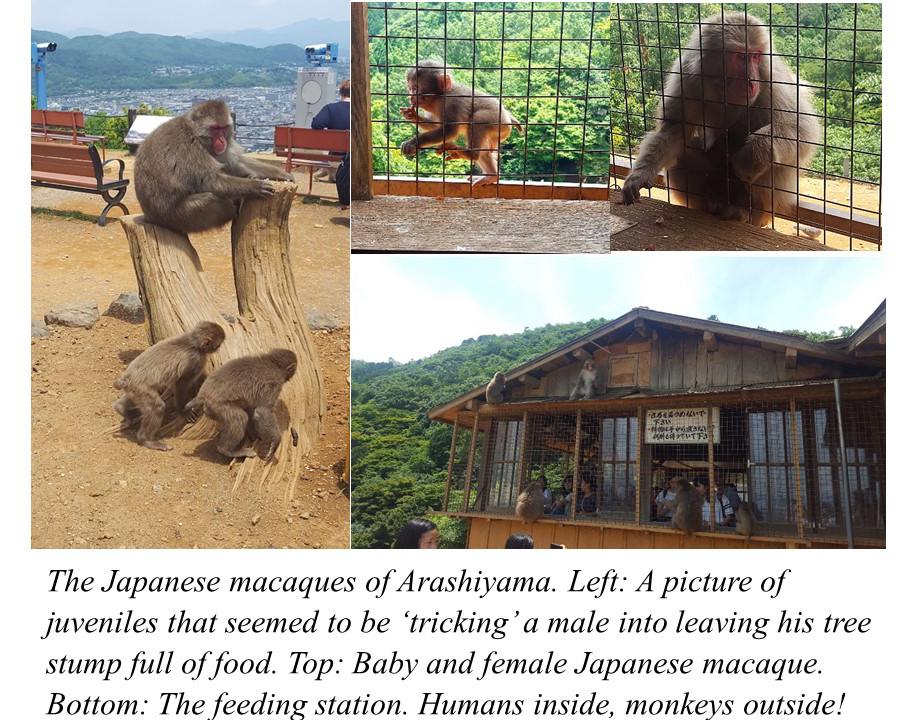 the male got comfortable. Another instance of young juvenile behavior that was quite funny involved distracting and luring away a male so one of the young monkeys had a chance to eat the food left on a tree stump. Lastly, I observed instances of grooming between a pair of macaques. Grooming serves as a method to reinforce social bonds and has hygienic purposes. One of the animals looked so relaxed, almost asleep, and its belly was exposed as the other macaque groomed. This behavior reflects a high level of trust and comfort between these two macaques. It was very rewarding to finally see individuals of the genus I have been reading about since my graduate career began, the group of monkeys that will be the focus of my research. I am so lucky to have this opportunity to observe wild monkeys here in Japan; this is impossible back in the U.S. I attempted my best at behavioral research collection in my head.

After the monkey park, we went to the famous Arashiyama bamboo forest. I was amazed at how tall the bamboo stretched into the sky. It was a surreal moment walking through the dense forest; it reminded me of the awesome power of nature. That evening Imai-sensei, Mita-san, and I visited Kyoto University’s main campus. As Mita and I walked through the campus museum I realized the long and amazing history of Kyoto University. It is the second oldest university in Japan, founded in 1897, and today has over 22,000 students. Walking around campus, I felt very at home. The university clock tower reminded me of Risman plaza at Kent State, a large space in the middle of campus where many students meet one another. Whether it was students passing us on bicycles or participating in double-dutch on the green space, to students preparing for July examinations, I was reminded that commonalities exist in all parts of life -no matter what country you are from.

I spent Saturday exploring Kyoto, heading to a few major destinations including Fushimi-Inari and Kiyomizu-dera temple. I made it to Fushimi-Inari before the predicted rain started to fall, but by the time I arrived at Kiyomizu, it was pouring! Even so, I thoroughly enjoye 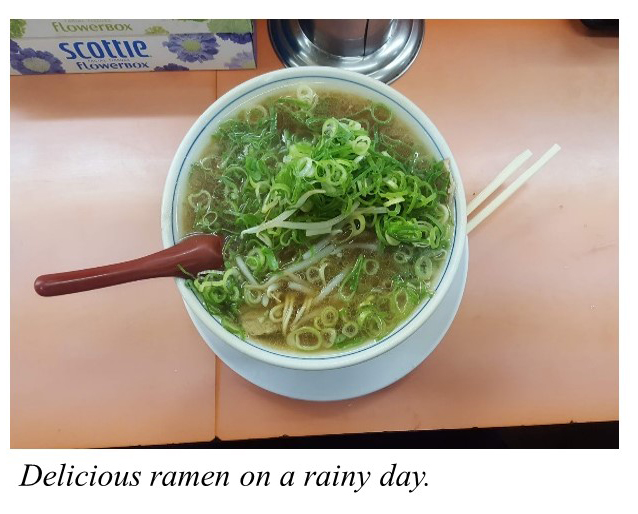 d the Buddhist temple, which stands halfway up Mt. Otowa. A large number of visitors come here to pay their respects to Kannon, a deity of great mercy and compassion. Once inside, I was inspired by the beautiful architecture, and I felt a tremendous sense of peace. I have only dreamed of seeing a temple such as this one. I smiled from ear to ear, knowing that this trip is truly an experience of a lifetime. Reading more about Kiyomizu temple after visiting, I learned that the figure of Kannon embodies feelings of gratitude from coming into this world, daily life, and loved ones. This is truly how I feel about not only this trip but also my life back home. I have been given so many wonderful opportunities, and I have incredible family and friends that support me through the ebb and flow of life. I will continue to be mindful of this gratitude. I hope one day I can give the love and light given to me back into the world.

Rain still pouring, I headed for a nearby noodle shop and satisfied my craving for a warm bowl of ramen. After some shopping in downtown Kyoto, a walk through Maruyama park, stopping to admire Chion-in temple, and finally exploring the Gion district, my weary-self headed back to Inuyama. This trip to Kyoto was a complete success in so many ways!

As the final week draws near, I cannot believe how fast my time in Japan has gone. From learning new techniques in the laboratory, to visiting the most magnificent places, to learning more about Japanese culture, I am not exaggerating when I say this has been a life-changing journey. It saddens me to think of leaving soon, it feels like I have just arrived. This week I will do one more round of functional analysis on TAS2R38 and complete my presentation for the molecular biology seminar next Monday. Stay tuned for one more week of adventures here in the Land of the Rising Sun!